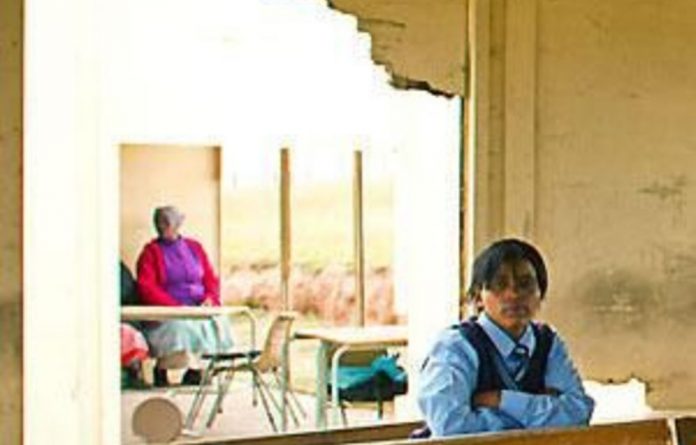 Pupils from the Eastern Cape school that was torched amid a misunderstanding over plans to improve its unbearable conditions have still not had any lessons a week later.

“Some pupils have been coming back to the burned down school but no lessons have been happening,” said Menziwa High School’s principal, Timothy Ntatu on Tuesday.

He would be meeting Eastern Cape education department officials and school governing body members on Tuesday, where he hoped “a solution could be found for lessons to continue”.

On Tuesday last week, frustrated pupils torched their school following three months of promises from the Eastern Cape education department about when and how their school would be improved. Ninety-eight pupils were arrested, but charges against most of them were soon dropped.

Misunderstanding
Ntatu claimed that from December until February he had understood that the leaking roofs, mud floors, broken windows and prefab classrooms with gaping holes in their walls would be replaced with new brick and mortar structures by the department. But later last month the department informed him that it would use “alternative technology” to do the work — a decision subsequently rejected by the SGB and parents.

Department head Modidima Mannya said Ntatu and the SGB were aware all along that this technology would be used.

He said he had explained that this technology “uses concrete and steel as opposed to [building] brick by brick and that 10 schools in the province were built last year very successfully using this technology”, but “for some strange reason I was later informed that the school only wants brick and mortar structures”.

Ntatu said at a meeting last month between department officials and stakeholders the officials said they would re-advertise for a contractor who would build using brick and mortar, but did not supply a date for when building would start.

The department’s spokesperson, Loyiso Pulumani, admitted that the government needed to better explain what this alternative technology entailed because there is a widespread “misconception” about it.

“People think we are talking about the old prefabricated structures,” he said.

“It is important for people to know that this technology is by no means inferior to any other product on the market,” he told the Mail & Guardian.

He said that using this method, walls were assembled using pre-manufactured, roll-formed steel and fibre cement board and then filled in with lightweight concrete. The structures were “as strong as a brick wall — and cheaper and quicker to build”.

The concept hails from Malaysia, where it has been used successfully for years, he said.

The Uvuyo Group considers this “a product of our country”, however, “as we only use products that are supplied or manufactured by our local market”.

The schools were built by the group using mostly local labour and in consultation with the communities, Coetzee said.

Quick and long-lasting
Communities were “ecstatic” with their new schools, he said, adding that he would be visiting them at the end of the month to enquire “if they are still happy” and to address any challenges they faced with the new buildings.

A school with 10 classrooms, under ideal conditions, could be built in “not more than three months” using this technology, he said, whereas a brick and mortar school could take up to eight months, with the former lasting as long as any building built using conventional methods.

The executive director of the Southern African Institute of Steel Construction, Hennie de Clercq, said alternative technologies like these are “absolutely a feasible option for South Africa”.

“[Such buildings] are as strong and will last as long as brick and mortar,” he told the M&G.

Using this technology was a more efficient form of building, said De Clercq, “especially if you’re building large things and lots of things — and in outlying areas because the amount of building material that would need to be conveyed to the site is less than it would be for brick and mortar”.

Menziwa High School originally formed part of a court case that was launched two weeks ago by Equal Education against Basic Education Minister Angie Motshekga and the nine provincial ministers for education.

Equal Education is attempting to force Motshekga to prescribe minimum norms and standards for school infrastructure.

The school withdrew from the court action in December after it was promised that improvements would be made to its infrastructure, Ntatu told the M&G last week.

“We thought it wasn’t necessary for us to be part of the court action anymore.”