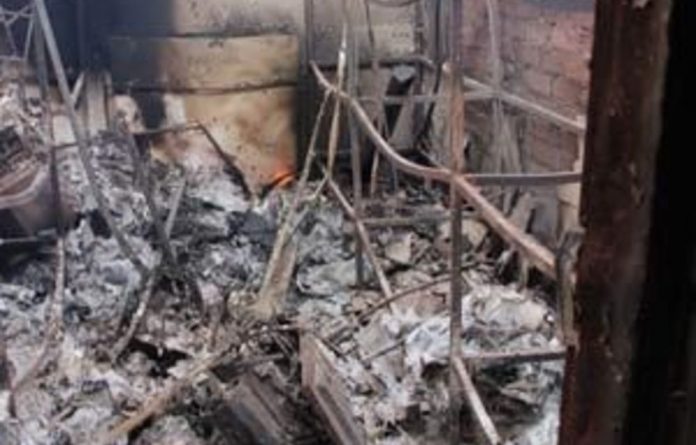 The Ratanda township outside Heidelberg was calm on Wednesday morning –perhaps temporarily so — allowing the community to count the cost of two days of service delivery protests.

Though a police unit was deployed to the clinic, workers were packing the most expensive medicines into cardboard boxes labelled “biohazard”, the only remaining containers, for removal. A large container of anti-retrovirals had been snatched, but the strongroom in which other medicines are stored had survived the raid. It would probably not survive an arson attack, the workers said, so they were salvaging what they could while they could.

Earlier in the morning, not yet knowing that the clinic had been already been looted, a group of women from a different part of the township debated whether it would be a legitimate target for the anger of residents. They could not reach consensus (the building is government-owned, but for service to the community), but were firm in their agreement that schools should not be touched.

“If they burn those down, what happens to the kids? No, they shouldn’t do that,” commented one.

On Monday the local offices of the municipality were burnt down, leaving piles of statements of outstanding rate payments scattered across the surrounding grounds. During the course of Tuesday both the centre for disabled people and the community library followed. In the burnt shell of the library, on Wednesday morning, a small group of men pulled copper wire from what little remained of the walls and ceiling; of the books nothing remained.

Throughout the township several businesses were cleaning up after being looted during the night. A spaza-shop owner, an employee of a building-supply dealer and a clinic worker all said they could identify the culprits, but would not do so for fear of retaliation. “Our houses are here, our families,” said one.

Police on the scene on Wednesday said none of their members had been seriously injured, despite the use of petrol bombs and suspected live-fire during the night. They counted themselves lucky that the worst to happen had been a relatively minor head wound from a thrown rock. Many of those on duty, however, feared that the protest had not yet peaked.

Some community leaders associated with the Ratanda Community Forum were in hiding on Wednesday, saying they feared arrest. Others urged a small crowd to hold back on marches, stone-throwing and especially petrol bombs, while they awaited a response to demands from the local authority.

Members of the crowd disagreed on what would constitute a decent response. On Monday many said a promise that their electricity supply would be switched from the municipality to Eskom, would satisfy them.

By Wednesday some were demanding the removal of the mayor, others wanted investigations into what they said was rampant fraud and corruption, and a small number vowed to continue protesting until President Jacob Zuma or an official of nearly his stature came to the township.