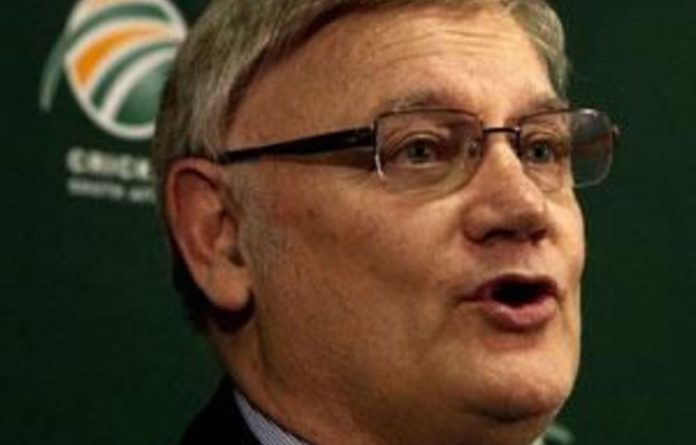 “The reputation and image of any organisation is its biggest asset and to address that issue, we need to pinpoint exactly where it has been dented and harmed,” Basson said.

“It will be one of my personal goals to find the reasons for that negative public opinion and then to implement the appropriate mechanisms to deal with it.”

Basson had only been in the job for two days, after his predecessor AK Khan resigned, and said his first press conference was only the beginning of a new era in cricket.

“This meeting today is just the start of a more active and more open, transparent relationship with all our stakeholders,” he said.

“We need to be able to restore that confidence and to fix the reputation and damage that has been done.

“The process will require cool heads, a high level of professionalism and a systematic approach to resolve the burning issues facing the organisation.”

Suspension
CSA’s board on Saturday agreed to adopt the recommendations of the Nicholson commission, suspending CSA chief executive Gerald Majola, but Basson felt that while speed was important, caution was needed.

“It is important to move quickly but not to move too quickly, otherwise more damage would be done to cricket’s reputation,” he said.
“The scientist in me says I must do things systematically and get the facts on the table and then make recommendations to the board.”

Basson said the behaviour of sports administrators was a personal bugbear of his and he hoped to try and bridge the gap between the antics on and off the field.

“The difference in the level of the professionals on and off the field is a burning issue,” he said.

“In my 40 years of involvement with sport, I’ve never come to terms with that.

“Our administrators, in general terms, in South African sport bumble along and hardly ever suffer the consequences of their actions — other than to come up for re-election every two years or so.

“We have to raise the bar in the board room to the same level of examples set by the players.”

Further legal action
While he would not be drawn on whether further legal action would be taken against Majola, Basson said he had already discussed it with acting CSA chief executive Jacques Faul, who had replaced Majola in the interim.

“Jacques and myself will address the board next Thursday on [Majola],” he said.

“We have our own ideas on how to move forward, with respect to that point.

“We will put it to the board and we will discuss it and debate it and then actions will follow.”

An apology to both former CSA president Mtutuzeli Nyoka and to the public could also be discussed.

“I don’t want to commit the board to a pronouncement on [an apology], however, I’m sure that issue will surface at the board meeting and it will be addressed appropriately.

“The board meeting on March 30 is a very, very important meeting.” — Sapa