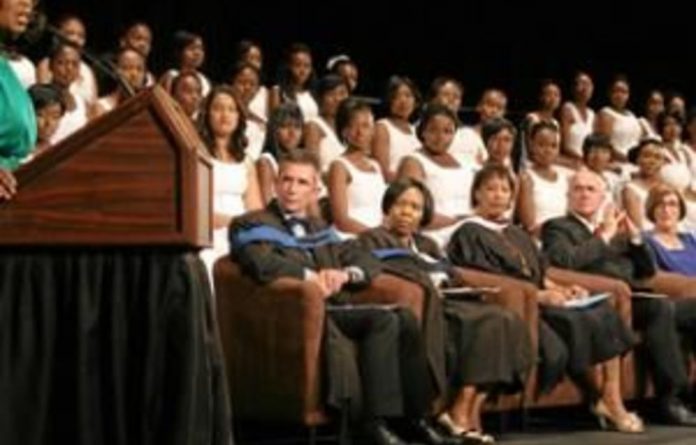 Johnson Mncube remembers the first day at Oprah Winfrey’s boarding school for underprivileged South African girls, when 11- and 12-year-olds were crying at the thought of being separated from their families. He says he almost wanted to put his own daughter in his pocket and take her home.

Five years later, Mncube is grateful she stayed. On graduation day he gazes proudly at his ­daughter, dressed elegantly in white,for the first­graduation ceremony at Winfrey’sschool. Bongekile Mncube, who has secured a place to study politics and economics at the University of Johannesburg, vows one day to help to “build the economy of this country”.

“We are so thankful to Oprah,” said her father, a pastor and small- business owner who never had the opportunity to go to high school.
EdwardElgar’s Pomp and Circumstance rang out on Saturday January16 as the graduates marched in, some unsteady on new high heels.

The ceremony was filled with cheers and tears, including Winfrey’s own.

High-achieving ­students from poor families were admitted after a rigorous application process in which Winfrey was deeply involved and she has ­visited South Africa regularly to counsel the girls.

Lean on me
Winfrey told reporters after the ceremony that her girls would ­continue to be able to rely on her support. A counseling unit had been set up to help the graduates to budget time, money and priorities during their study in university.

In her graduation speech, Winfrey praised the teachers, administrators, social workers, psychologists and family members she said had ensured the students succeeded.

Winfrey said she has learnt it takes a team to support students, ­especially those who have ­experienced poverty and personal trauma. She regarded the ­students as her daughters and listed the blows they have experienced — divorce, violence, molestation, the loss of one parent, the loss of a ­second parent, sorrow, sadness as well as grief.

Of the original 75 students in the first intake, 72 have graduated. They are headed to universities in South Africa and the United States.
Across South Africa, more than half a million members of the ­country’s class of 2011 disappeared before the remaining 496 000 wrote their final exams. Only a ­quarter of those who graduated in the country did well enough to qualify for ­university study, according to ­figures released by government.

“I’m one proud momma today,” said Winfrey, who was dressed in a flowing green gown — the school’s official colour.

Changing the world
Graça Machel, whose husband,­ former South African President Nelson Mandela, inspired Winfrey to open the school, called on the ­graduates to change the world. Mandela has retired from public life and did not attend the ceremony, Although he attended the opening of the school in 2007.

“You are leaders,” Machel said in her graduation speech. “But be humble. Listen. Learn. Try, and try again,” she advised the graduates.
Winfrey, one of the ­wealthiest women in the world, spent $40-
million to build the school, giving it facilities that are the envy of many South African universities. She said the school owed its success to teachers who came early and stayed late, social workers like one who travelled hundreds of ­kilometers to rescue a student who had ­encountered violence during a visit home, as well as parents who instilled discipline despite difficult lives.

Winfrey asked staff and ­family members to stand for applause ­during the ceremony.

She encouraged all South African schools to raise their ­expectations, saying the experience of her school indicated that young people would respond by excelling.

From the start, Winfrey’s students were told they should set their sights on university.

A troubled past
Despite the money and intentions, the school has had some ­trouble. Soon after opening, a woman ­working as a dormitory matron was accused of abusing students. She was acquitted in 2010.

Winfrey, who has spoken of being abused as a child and called the ­allegations against the matron crushing, has said the trial’s outcome was “­profoundly” disappointing.

Winfrey settled a defamation lawsuit filed in Philadelphia by the school’s former headmistress, Nomvuyo Mzamane, who claimed Winfrey defamed her in remarks made in the wake of the scandal.

Last year, a baby born to a student at the school was found dead.
Winfrey said there were times when she was discouraged, but that “I always held the vision that this day was possible.”

Graduate Bongekile Mncube took Winfrey’s words to heart. “The
world should watch out,” she said. “We’re about to take over.” — Sapa-AP

Feminism’s got its groove back