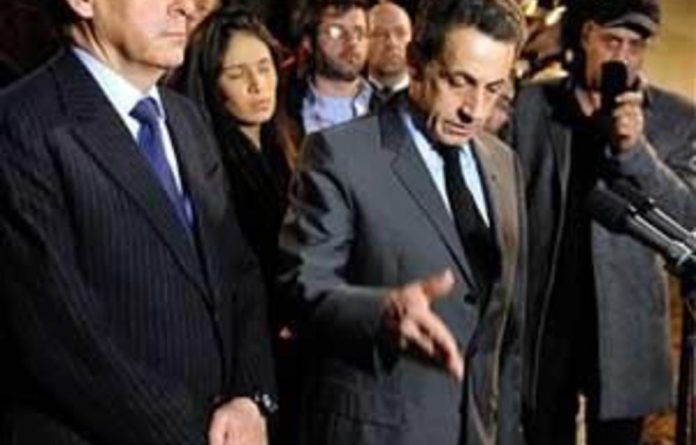 A gunman suspected of killing three children and a rabbi at a Jewish school wounded three police officers in a shoot-out at a house in Toulouse in south-west France on Wednesday and said he was a member of al-Qaeda.

Interior Minister Claude Gueant said the man targeted in the raid was a 24-year-old man who had visited Afghanistan and Pakistan, and had shot dead the four out of revenge for France’s military involvement abroad. He is also suspected by authorities of having killed three soldiers of North African origin last week.

France’s President Nicolas Sarkozy, campaigning for re-election in a presidential poll in five weeks time, has blamed racism for Monday’s school attack. His handling of the crisis could be a decisive factor in determining how the French people vote.

“He claims to be a mujahideen and to belong to al-Qaeda,” Gueant told journalists in Toulouse, referring to the gunman.

“He wanted revenge for the Palestinian children and he also wanted to attack the French army because of its foreign intervention.”

France has troops in Afghanistan as part of Nato forces.

Raid
Gueant did not say how they had tracked the man down, but that police were talking to his brother at a separate location in connection to the killings.

His mother had also been brought to the scene to help negotiate with the man, who is holed up in a small apartment building in the leafy neighbourhood.

Heavily armed police in bullet-proof vests and helmets cordoned off the area where the raid was taking place, in a suburb a few kilometres from the Ozar Hatorah Jewish school where Monday’s shootings took place.

Reuters witnesses heard several shots at about 4.40am GMT.

A police source said the police could launch an assault if the standoff lasted for some time. “There are more and more people around, so this creates a dangerous situation.”

Gueant said Sarkozy had been informed of the raid which began at 3am (2am GMT). When he was the mayor of an upmarket Paris suburb, Sarkozy helped negotiate the end of a hostage crisis involving several children. It has been credited with boosting his political career.

‘They don’t know what they’re doing’
Immigrants and Islam have been major themes of the campaign as Sarkozy tried to win over the voters of far-right leader Marine Le Pen. Analysts say the shootings could transform the election debate and possibly tone down the populist rhetoric.

Jean Marc, a 56-year-old restaurant owner in the city who declined to give his last name, said he believed the crisis would benefit the far right or Sarkozy in the election.

“The Socialists don’t talk about this stuff and it shows they don’t know what they are doing,” he said. “They [the police] need to get this guy.”

Earlier on Wednesday, police sources told Reuters that a man had been arrested at a separate location in connection with the killings.

Authorities believe that the gunman in the school shooting was the same person responsible for killing three soldiers of North African origin in two shootings last week in Toulouse and the nearby town of Montauban.

The same Colt 45 handgun was used in all three attacks and in each case the gunman arrived on a Yamaha scooter with his face hidden by a motorcycle helmet. — Reuters