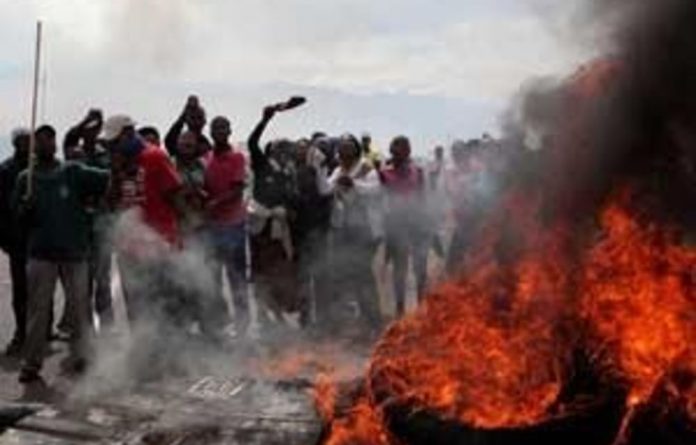 The normally tranquil farming town of Grabouw — situated a little over an hour’s drive south-east of Cape Town along the N2 highway — has been rocked by violent protests this week.

Residents are upset at overcrowding at the Umyezo Wama Apile Combined School, a Grade 1 to 12 school with 1 850 learners enrolled.

The situation has calmed down since Monday’s conflict — which required the N2 to be closed briefly amidst the upheaval — but John Michaels, head of the Elgin Grabouw Civic Association, has threatened to make the community “ungovernable” if officials do not meet residents’ demands to split the school into separate primary and secondary schools and provide more classrooms for students.

If the two sides continue at loggerheads, and the situation again escalates, it could have real economic consequences for some of South Africa’s most vulnerable workers and their dependents.

Grabouw is the commercial centre of the Elgin Valley, South Africa’s largest fruit producing and exporting region. Monday’s protests prevented scores of farm workers — many of whom live in the informal settlements surrounding the town, rather than on the farms themselves — from getting to work.

In addition to their normal day rate, which is typically less than R70 per day, workers can earn R27 and upwards for each bin of apples they pick. For those earning R400 or less per week, this extra money can be hugely significant, swelling weekly compensation to as much as R600 or R700.

Economics
Most of the area’s seasonal farm workers come from the Eastern Cape, lured by the prospect of earning more money in a week in Grabouw than they could earn in a month at home — if they were able to earn anything at all.

Many of these workers send large portions of their pay home to help family members staying in the largely jobless areas of the Eastern Cape. They set another portion of their earnings aside to support themselves when they return home for the off-season.

Losing Monday’s pay hurt and losing more could be devastating. Albert Maputle, a foreman with over 15-years of experience on the region’s apple farms, explained the economics.

“You can say that if a man makes R370 for the week, he will leave R150 in the bank. He will use the rest of the money for food and for groceries and airtime.”

“For the young guys, with no wives, no children, they stay maybe three or four together,” said Bathwa Mazwi, another supervisor. “They put their money together to buy 10kg of mealie-meal, rice, potatoes, chicken, fish — maybe 10 tins for the month.”

They spend some more of their money on airtime — “maybe R30 for the week” — and on beer for the weekend, “one case for the four guys”. Aside from the occasional cold drink and other spending on clothes, food and toiletries, the rest gets saved.

Lost money
The men on his team, Maputle said, “send maybe R500 a month to his family and save R200 for himself” each month. The women — four of whom serve as sorters for his 10-strong picking crew — also send money home, and collect Shoprite stamps in their books for use in December.

Mazwi’s team will finish the season in Grabouw, sometime in May, before following the work north to Citrusdal. There, they will work through spring before heading home for the summer. Although the season there is longer, the “pay is not so good”, he said. And the opportunity to save is not nearly as great as it is in Grabouw.

Umyezo Wama Apile — the school at the centre of the tension — is scheduled to reopen, with mobile classrooms providing extra space for pupils, at the start of the new school term on April 11.

On one side of the issue, Michaels — speaking for the civic association — gave Donald Grant, the provincial minister for education in the Western Cape, until Monday to respond to residents’ concerns. “If he fails to do so, we will embark on another protest,” he said.

On the other side of the debate, Grant said that “what we have here is a case of political motives and agendas attempting to make Grabouw ungovernable”.

In the middle, Maputle, Mazwi, their teams and many others in the region — seasonal workers not least among them — are hoping that tensions will not flare up again.

Economic week ahead: Lots of data, not as much electricity

This week SA will be dealing with power outages and Americans will head to the polls for the country’s mid-term elections. Here's your guide.
Read more
Business

Economic week ahead: Mind the banks

Central banks in Europe, the UK, Japan, Egypt and Kenya are among those expected to announce policy decisions in the week ahead.
Read more
Business

South Africa, Nigeria and the UK are expected to release consumer inflation figures and the US will give an update on housing data this week.
Read more
Business

The US will host most African leaders at a three-day summit focusing on trade, investment, security and governance issues.
Read more
Business

Economic week ahead: Rates decisions in SA and Nigeria

Nigeria and South Africa will announce their interest rates this week. Will Gill Marcus need to raise the repo rate to keep the rand strong?
Read more
Advertising