Engineers in the making 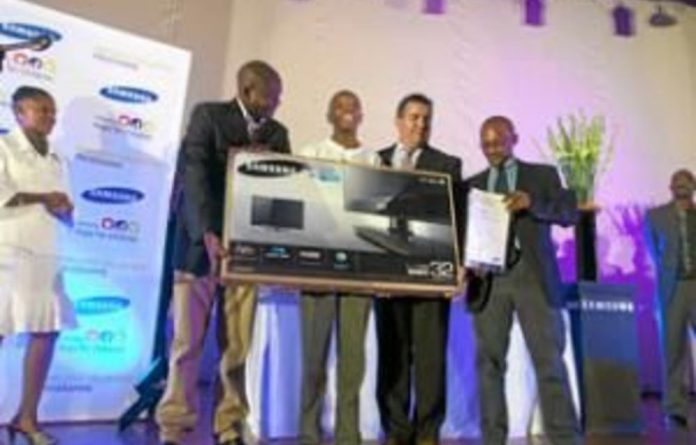 Ululations, hugs, applause and throbbing music provided an exhilarating atmosphere during the graduation ceremony of the first intake of grade 12 pupils at the Samsung Electronics Engineering Academy. The event was held at the Alberton Civic Centre in Ekurhuleni, east of Johannesburg.

The academy is one of the ­flagship programmes of Samsung South Africa’s corporate social ­responsibility initiatives and is aimed at creating ­opportunities for African youths to enter the electronics job market. The short-term ­objective is to develop 10 000 ­electronics engineers throughout the continent by 2015.

Each graduate received a ­certificate of completion and 33 pupils who achieved 80% and higher were given ­certificates of achievement. The top three achievers in each grade received prizes.

Top Prize
First prize went to Refiloe Machaba, the academy’s overall top achiever. Machaba took home a Samsung Galaxy Tab, laptop and 32-inch LED television set. An excited Machaba said: “I really feel privileged and honoured to be the overall winner. It is all thanks to my principal, who ­discovered my potential while I was doing grade eight.
“She was the one who encouraged me to join the Samsung initiative. In fact, I think our school is blessed with wonderful people making the environment really ­awesome,” said Machaba, who intends to study ­chemical engineering after ­completing grade 12.

The academy wants to complement the government’s efforts to curb the growing joblessness among the youth by providing them with ­relevant technical skills. Last year Statistics South Africa recorded that 25.7% of young people aged between 15 and 25 were unemployed.

Enterprising journey
Speaking on behalf of the four technical high schools, the principal of Katlehong Technical High, Margaret Masiteng, said the ­graduation marked the culmination of an enterprising journey.

“I am so excited. In the beginning few people believed we could travel this far. To Samsung I want to say thank you for your contribution. By choosing to invest in our pupils you have made a worthwhile and long-term investment with far-reaching benefits.

“I challenge other corporations to step up to the plate because there is more that needs to be done to tackle the challenges facing our country. As principals of schools that benefit from this initiative, we pledge to maintain and improve the 80% benchmark. I believe we have ­capable teachers and pupils to pull this off,” said Masiteng.

The importance of technology
Bhekisipho Twala, professor of ­artificial intelligence and statistical science in the department of electrical engineering and electronic ­engineering science at the University of Johannesburg, delivered the keynote address. He underlined the importance of technology and called on other companies to sponsor similar initiatives, because “life would never be easier without the advancement of our knowledge and technology”.

“The role of the engineers will be critical in fulfilling those demands,” said Twala.

Job creation
Samsung’s Africa regional head of corporate citizenship, Ntutule Tshenye, said the company was blazing the trail with this initiative because it was the only one that guaranteed 100% job placement to qualifying grade 12s. He said other ­companies only provided training, not jobs.

“The pupils will be placed at service centres, knock-down plants or factories and call centres.

“We believe that even people who work in service and call centres need to be technically oriented to provide high quality service,” said Tshenye.