Teen’s shooting: It’s not a black and white thing 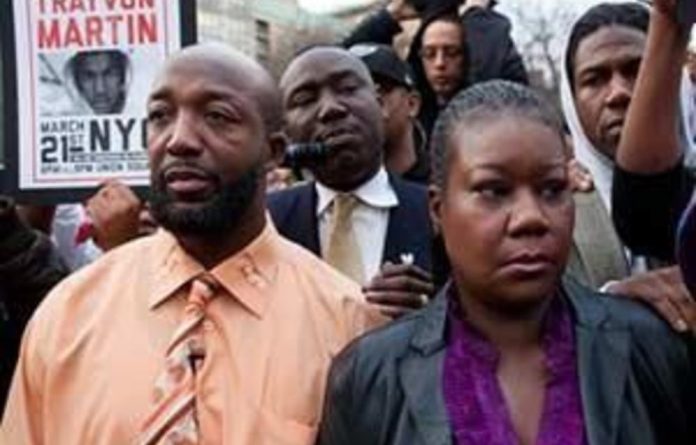 Trayvon Martin’s mother on Wednesday told hundreds of protesters demanding an arrest for the shooting death of the unarmed Florida teen by a neighbourhood watch captain that “this is not about a black and white thing. This is about a wrong and right thing”.

Sybrina Fulton spoke to demonstrators at what organisers called A Million Hoodies March at a New York park about her son’s slaying last month by watch volunteer George Zimmerman in the gated community of Sanford, Florida. Martin was wearing a hoodie at the time of his death.

“Our son is your son,” Fulton told the crowd that waved signs decorated with Skittles, the candy the 17-year-old African American was carrying back from a convenience store when he was followed by Zimmerman (28) who carried a gun.

“This is not about a black and white thing. This is about a wrong and right thing,” said Fulton, her voice quivering with emotion.

“Zimmerman took Trayvon’s life profiling him. My son did not deserve to die,” Tracy Martin said. “There is nothing we can say to bring him back but I’m here to ensure that justice is served so that no parents have to go through this again.”

Self-defence
The incident has drawn national attention and sparked debate over Florida’s Stand Your Ground law since Zimmerman has claimed self-defence in the fatal shooting. The police have thus far declined to arrest him.

One demonstrator, Shawn Smith (32) listened to the speeches with his daughter (8), son (9) and nephew (10) who held signs decorated with Martin’s photograph and glued-on Skittles in the shape of a sad face.

Smith, a music producer, noted his nephew resembles the slain teen and asked rhetorically, “I’ve got to be concerned when I send my kids to a store?”

Organiser Daniel Maree said the rally was intended to “put pressure on whoever it takes to charge George Zimmerman and prosecute him”.

“Everyone who attends this rally is conscious of an epidemic in our society of young African-American people being targeted,” Maree said.

On February 26, Trayvon Martin was walking back to the gated community in Sanford when he was seen by Zimmerman. Zimmerman called Sanford Police to report a suspicious person in the neighbourhood and then, while armed with a handgun, followed the teen despite the police dispatcher telling him not to.

Investigations
The Justice Department’s Civil Rights Division and the FBI said on Monday they had opened an investigation into the shooting. A state grand jury was also being convened.

Police have turned the case over to prosecutors, citing Florida’s Stand Your Ground law, enacted in 2006 and now in effect in about 20 other states. The law provides a shooter with wide latitude to claim a killing was in self-defence.

More than 818 000 people have signed a petition on Change.org, a social action website, calling for Zimmerman’s arrest.

In the hours before the rally, Tracy Martin recalled one of the last conversations he had with his son, a discussion about love.

“I told him just think about the letters that are in the word love,” recalled Martin. “I told him L stands for love. O stands for over. The V stands for violence, and the E stands for evil. And I just said love over violence and evil. My son was a good kid and he didn’t deserve to die this evil way.”

The Sanford police chief has said the department did a good job in not arresting Zimmerman, and the father of the neighbourhood watch volunteer, Robert Zimmerman, said accusations against his son are false and misleading. — Reuters