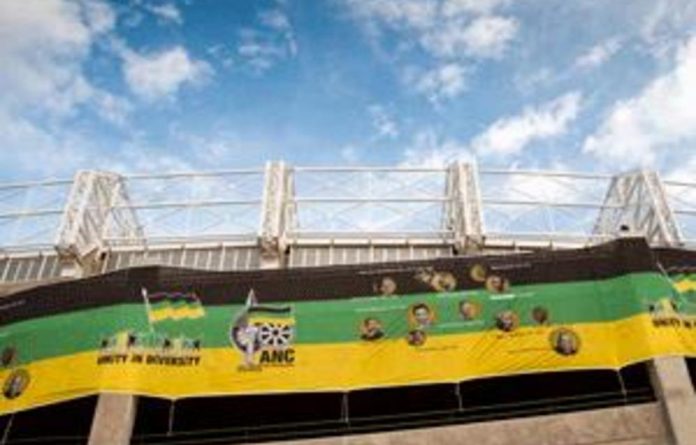 The company that held a major contract with the ANC for its January 8 celebration earlier this year says it is owed R10-million and the party is not paying.

And subcontractors of the company that held the primary contract for the ANC’s campaign ahead of last year’s local government elections say they have not been paid in full.

Documents in the Mail & Guardian‘s possession support this claim. Yet the ANC maintains that it lives within its means and that the only bill it has not paid is under discussion. This itself is in dispute, however.

Details of the ANC’s funding and the contracts it is involved in are hard to get. There is no obligation on political parties to disclose the source of donations or how much money they receive.

In terms of contract disputes, the close links between the party and the government make for tight-lipped companies and individuals.

“If you deal with government departments that give out business, just about everyone that makes a decision there is deployed from the ANC,” said one source this week, after being pressed for information. “If I tell you things I’ll be blacklisted. Maybe not on paper, but I won’t be getting tenders, that’s for sure.”

ANC’s non-payment affecting small businesses
But a growing number of legal actions — some of which cite the ANC but none of which directly involve the party — provides some insight into the complex dealings of the party and the impact the apparent non-payment of full amounts due on contracts is having on small and medium-sized businesses and their employees.

“If we had been a little bit smaller and a little bit less cash-flush, we would certainly have gone under because of this,” said Gary King of television commercial production house Picture Tree. “What ended up happening is that people didn’t get the salary increases and bonuses they deserved.”

Picture Tree shot, at short notice, a television commercial for the ANC election campaign last year. Though it was due to be paid in May 2011, it is still waiting for just less than R700 000. The company has now served summons to recover that money and is awaiting judgment.

But Picture Tree is not suing the ANC, even if the party was the ultimate beneficiary of its work. The company responsible for the payment is Blueprint Strategic Communications, a small black-empowered agency that shares offices with an architecture firm in Rosebank. Blueprint was appointed to handle all the party’s advertising needs for the election campaign and the ANC even issued a statement, on February 3 2011, to note how “pleasurable” it was to have it appointed.

Primedia also going to court
Picture Tree is not alone. The Primedia Outdoor advertising group has also gone to court to recover just more than R2-million it says it is still owed for a billboard advertising campaign that ran between March and May 2011. Normally, such a campaign would be contracted out by the client itself, but contrary to standard industry practice there are two parties that acted as middlemen in this instance. Primedia is therefore not suing the ANC or Blueprint but major advertising company MMS Communications, a company Primedia counts as a major client.

“We’re just saying they should pay the money,” said Steve Ratlou, executive chairperson of Primedia Out of Home. “There was a service provided and that should be paid. We’ve served the summons and we haven’t yet heard from them. There is no payment plan in place.”

Ratlou is the only party the M&G spoke to who would say on the record what many others will repeat only in private: that the moral responsibility for the payment lies with the ANC. As the ANC was not party to the contract, however, the company is suing MMS instead.

MMS, by way of advertising industry veteran Gordon Patterson — group managing director of one of its operating arms, Starcom Mediavest, which worked on the ANC contract – said as far as it knew the ANC had not paid Blueprint.

“We’re taking advice from our international shareholders on the matter,” said Patterson, after being asked whether MMS would defend the summons or sue “up the chain” in turn. “As far as we are concerned, Starcom operated as an agent for Blueprint. We have assisted and continue to assist Blueprint as far as we possibly can to recover the money from the responsible principal.”

ANC aware of the debt
The M&G is also in possession of what appears to be an acknowledgment of debt from the ANC, dated August 5 2011, which does not state an amount but says the balance due to “Blue Print” (sic) “will be settled in due course”.

According to sources who did not want to be named, the balance is in the region of R20-million.

But on Thursday, responding in writing to questions from the M&G, ANC treasurer general Mathews Phosa said: “The ANC does not owe Blueprint Strategic Marketing Communications any money for reasons well known to them.”

The dispute about who owes whom what is strangely reminiscent of a more recent matter, which has thus far attracted less legal action. Some of the many hundreds of artists and technicians involved in the production Tshihumbudzo: Our Story, Our Future, as part of the ANC centenary celebrations in January, have not been paid in full, it emerged this week.

The primary contractor, VWV Interactive, would initially not comment on the matter, but subsequently said some of the people and companies it had hired had only been paid 50% of the money due to them because that is all it had received from the ANC.

Again, the ANC disagreed. In his written response, Phosa said the party owed VWV just more than R6.2-million; by phone he told the M&G that because the live performance of the show in Bloemfontein had been rained out, the payment of that amount was under discussion. “We didn’t cause the rain,” he said. “You could say the rain washed away the payment.”

The source also, more than a little reluctantly, said the outstanding amount is “closer to” R10-million.

Treasurer says ANC fundraising doesn’t concern suppliers
Phosa said the ANC had done some fundraising this year, but that was no concern of its suppliers. Asked whether the party was aware of the situation of some subcontractors who had worked on its contracts, he said “the ANC does not pry into our main contractors’ arrangements with their subcontractors”.

He said VWV was responsible for paying its contractors once it received the outstanding money and that Blueprint had told the party it had made arrangements to pay its subcontractors. That does not appear to be the case, according to at least two subcontractors.

“The ANC always honours its contracts and regrets delays in payment of its bills wherever this has occurred,” said Phosa, scoffing at any suggestion that the party was not solvent.

The party has previously been in the firing line for non-payment or part-payment on major contracts for events, but that has not affected its ability to sign up providers.

“It is very fortunate, in this case, that the advertiser [the ANC] is not likely to go insolvent tomorrow,” said Starcom’s Patterson. “Every four years this campaign happens and the media owners who are complaining now, you know what? In three years’ time they’ll be queuing up again.”