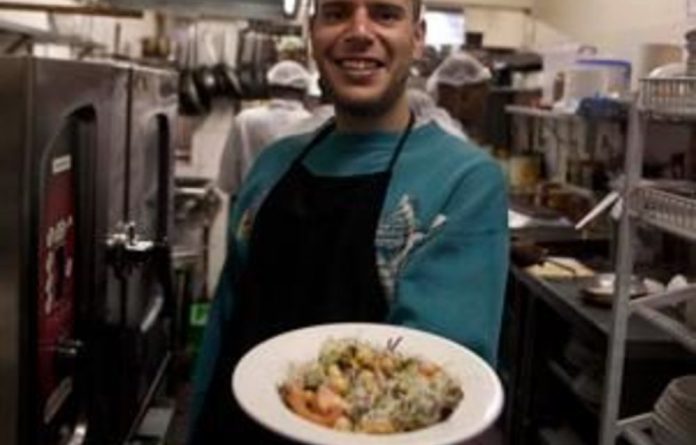 If you’re looking for a classic foodie family, you can’t go wrong with the Jardims. Mama is Mimi Jardim, the doyenne of Portuguese cookery: chef extraordinaire, author of Cooking the Portuguese Way and head of Jardim’s Cookery School. Papa is Augusto Jardim, a master at traditional Portuguese meat dishes, especially those from Madeira, like beef espetada.

“We all have our specialities,” says Daniel Jardim.

“My sister Isabella is Miss Strange Haute Cuisine Sometimes Works, Sometimes Scary; my other sister, Cezarina, is the undisputed Lasagna Queen of the Universe. My brother Raymond has taken on my dad’s role, making chicken peri-peri and braais.

A nutritionist, chef, cookery book co-author and teacher, Daniel would seem to fit right in. But there’s a crucial difference: born into a culinary tradition that features pork, shellfish and bacalhau, he’s a vegetarian.

On his 13th birthday, “I announced much to the shock and horror of the family that I was no longer eating meat. And that began The ­Adventure.”

Culinary adventures
It’s an adventure watching him demonstrate what to do with snake beans and ridged luffa, or trailing behind him on a shopathon in Cyrildene, or tending the vegetarian skewers on the braai at the Buddhist Retreat Centre in Ixopo while he sorts out the za’atar dressing for the golden lights soup.

It’s an adventure — no, a challenge — taking a deep whiff of a sulphurous bit of asafoetida at one of his cookery demonstrations. It’s known as “devil’s dung”, he tells us, but in small amounts “just imparts the most wonderful taste” to dishes.

Nutritional information is part of the deal: he will tell you that if you crave sour foods, you’d better check out your liver. If you ask about tinned versus fresh tomatoes, you’ll get a brief lecture on lycopene — how the more concentrated the colour is, the stronger the lycopene, which protects the lungs. And then a gentle dig at the establishment: “Heinz has cottoned on to this. Now ketchup is a superfood.”

He laughs a lot, a quick self-deprecatory chuckle, while throwing stuff into soup or chopping vegetables — with a ceramic knife, because “I enjoy the sense of mindfulness that is brought into the kitchen by taking care when working with the knife”; if you drop it, it shatters. He tells you what the specials are at Fruit and Veg City. His knowledge of the various foodie parts of Johannesburg is encyclopaedic, from the shop with really good green papaya to the hawker with the best ginger in the world.

His childhood comes up often in demonstrations.

“Use whole garlic cloves in soup,” he says. “This is the sort of thing you learn when you grow up in a Portuguese household. If you get a whole garlic, it’s a mini-Christmas. Like finding the tickey in the Christmas pudding.”

Spreading the message
Jardim is co-author of The Cake the Buddha Ate, a cookery book with recipes he and his staff created at the Buddhist Retreat Centre where he spent time as resident chef. He’s often on the move, staging demonstrations in Johannesburg, Durban, Ixopo, Hilton and Stanford, and he’s now doing training and menu development for a popular Melville restaurant.

Because he’s often funny, his approach is unusual and the food is good; he has a big fan base.

Buddhist Retreat Centre founder Louis van Loon would like to widen that base. “I think Daniel has the charisma and the know-how to make a great TV chef,” he says. “He proved himself at the centre for the years he worked there and ran workshops for our visitors.”

Cookery wasn’t Jardim’s goal. After matric he went to Cape Town to DJ in a nightclub, then on to London where, he said: “I thought it would get my two passions out of my system, which were to learn everything about holistic therapies and to spend some quality time on a dance floor.”

He qualified as a nutritionist, spent a decade advising clients, then came back to Johannesburg for the sun (his company is called “solarpolarity”).

Looking for some way to “be in service to a community, preferably one involving some kind of spiritual practice”, he volunteered to work in the Buddhist Retreat Centre office. By the end of the first month he’d taken over the kitchen.

Tastes for all seasons
It was at the centre that he developed sessions based on seasonal cookery. “In each season there is a link between what’s fresh and what the body needs. It creates a wonderful map for us to start experiencing a great connection with nature. We focus with our bodies.” Autumn, for example, is about the end of summer, “so we focus on endings”. The colour is orange, the foods are those that nourish and protect the lungs and the main flavour “refers to pungency and spices — it’s all very practical”. Other demonstrations focus on a single ingredient used in different ways, or sushi, or eating on a shoestring budget.

“I’ve worked in the industry a long time and seen all the fads — today it’s low-carb, tomorrow it’s no-carb and by the end of the week we’re carbo-loading again. We should really know by now that any kind of restrictive diet is difficult to maintain long-term,” he says. “The most important thing is to remind people that every meal can be an incredible event and eating healthily doesn’t mean that we stop enjoying our food.”

Sensible advice, but he hasn’t convinced his extended family that life can be sustained without pork sausages. “I still have aunties,” he says, “that see me now with a great deal of relief and surprise that I’ve made it through all these years.”