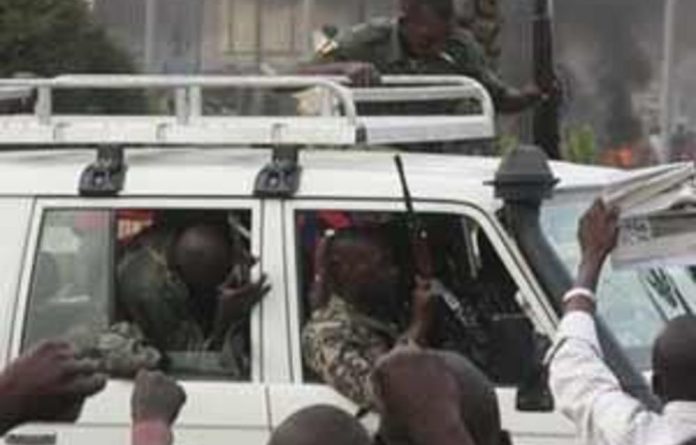 Tuareg rebels in north Mali pushed south to occupy positions vacated by government forces, sources said, as mutinous soldiers in the distant capital sought to complete a coup by arresting the president amid growing international condemnation.

The renegade soldiers — who call themselves the National Committee for the Establishment of Democracy — said they had acted because of the government’s “inability” to put down a Tuareg-led insurrection in the north.

President Amadou Toumani Toure had been initially holed up in the presidential palace as shots were traded outside on Thursday, but managed to flee the premises.

A military source said he had since moved to a military camp with loyal members of an elite paratrooper unit.

MNLA rebels were approaching towns in the desert north, apparently taking advantage of the confusion created by a coup attempt in the capital Bamako by low-ranking soldiers angry at the government’s handling of the uprising.

Mali, which was flooded with men and weapons after Libya’s civil war, was being rocked by crises — including the Tuareg-led rebellion, a growing Islamist threat and a food crisis — well before the soldiers mutinied.

A Malian officer in the northern town of Kidal said rebels had occupied the military camp in Anefis, 100km to the south-west, after government forces withdrew.

“The army has pulled back to Gao,” a source in Timbuktu, another main town in the north, told Reuters, asking not to be named. “There is no longer any military leadership. [The rebels] will take the towns in the north,” he said.

‘Strongly’ condemned
As sporadic gunfire rang out in the capital on Thursday night, Western powers and the African Union condemned the mutiny, Mali’s first coup in 21 years.

A statement from the UN Security Council said its members “strongly condemn the forcible seizure of power from the democratically elected government of Mali by some elements of the Malian armed forces”.

The 15-nation body called on the rebels “to ensure the safety and security of President Amadou Toumani Toure and to return to their barracks”.

France suspended cooperation with its former colony, also calling on the mutinous soldiers not to harm Toure.

And Washington, which has repeatedly voiced fears that parts of Mali and neighbouring countries are becoming a safe haven for jihadi extremists, called “for the immediate restoration of constitutional rule”.

Junta spokesperson Lieutenant Amadou Konare said the takeover was because of a “lack of adequate [military] material to defend the nation”.

Claiming to speak for the army, he said the junta “solemnly commits to restore power to a democratically elected president as soon as national unity and territorial integrity are re-established.”

Curfew
The man presented as their leader, Captain Amadou Sanogo, declared a national curfew as the rebels announced all borders had been closed until further notice.

Konare appeared on public TV late on Thursday and said the curfew would be in place from 6pm GMT to 6am GMT.

The coup leaders also ordered all civil servants back to work from next Tuesday.

Renegade soldiers in the north-east city of Gao detained their military chiefs in support of the coup.

But it remained unclear how tight the new junta’s grip on power was.

“The president is in Bamako, he is not at an embassy. He is in a military camp where he is in command,” a military source said on condition of anonymity.

The elite Red Beret paratroopers were keeping watch, he added.

Ousted ouster
The president is himself a former paratrooper who led the ouster of “president-for-life” Moussa Traore in 1991 before handing power to civilians. He won an election in 2002 and was re-elected in 2007.

Military sources spoke of one rebel soldier having been killed in the fighting. Mali’s Red Cross reported about 40 injured, including three to four civilians caught in the crossfire in Bamako and Kati.

A statement from Amnesty International denouncing the coup said at least three people had been shot dead, with 28 wounded.

Journalists said soldiers had ransacked offices at the headquarters of Mali’s public radio and TV stations, stealing cameras and computers and smashing down doors.

A few dozen soldiers appeared on TV after hours of music videos had played in a loop. They appeared to be largely rank-and-file green-beret soldiers, with only two officers present.

Mali is usually seen as politically stable, but unrest in the north, where Tuareg tribes have long felt ignored by a southern government and where al-Qaeda has also taken root, has created a major security problem.

The demise of Libya’s Muammar Gaddafi compounded the situation: hundreds of battle-hardened heavily armed Tuareg who had fought for him returned to Mali, ready to take up a decades-long struggle for independence.

Democratic success
Under Toure’s leadership, Mali — which has battled successive Tuareg rebellions since independence and more recently al-Qaeda in the Islamic Maghreb — has been hailed as a growing democratic success.

But in mid-January the Tuareg launched a fresh rebellion for the independence of what they call Azawad, which makes up the vast desert northern triangle of the bow-tie shaped nation.

The fighting has forced as many as 206 000 people to flee their homes, compounding a humanitarian disaster at a time of drought and food shortages, a UN agency said on Thursday.

Western powers — concerned that the north could become a safe haven for al-Qaeda — were quick to call for order to be restored.

The World Bank and the African Development Bank announced they were suspending development aid to Mali.

They joined the African Union and the Economic Community of West African States in condemning the coup and called for a swift resolution to the crisis. — AFP, Reuters

Serge Daniel
Serge Daniel is a journalist and writer Franco-Beninese. He is the author of the best-selling book Les Routes clandestines (Hachette publishing house). He is correspondent for Radio France International and Agence France-Presse in Mali . He is the oldest post of all RFI correspondents on the African continent.