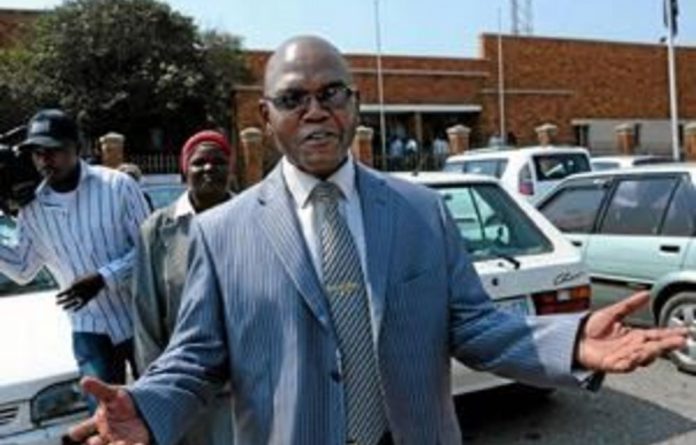 President Jacob Zuma seems to be creating a personal shield and spear in the justice and security sectors: a phalanx of praetorian guards allied to him and to each other.

These connections appear to be driving key interventions, notably:

“President Jacob Zuma believes he owes Mdluli for his acquittal in the rape case,” said one National Prosecuting Authority (NPA) source, while denying the correctness of this belief.

Whatever the truth may be, it appears that Mdluli himself is keen to hint at this connection.

In his November 2010 top-secret report to Zuma setting out his allegations of a conspiracy against him, Mdluli says: “My relationship with Colonel Ximba is on a professional level, both politically and work related — Colonel Ximba is an active member of the ANC and during the struggle was a leader of one of the self-defence units — Colonel Ximba also played an important role in the Polokwane conference and also during the president’s trying times with his engagement with the NPA.”

According to reports, it was Mdluli who, following his appointment as CIS head in 2009, boosted Ximba up the ranks from constable to colonel.

Mdluli appears to have been hand-picked by Zuma allies for the crime intelligence position and was appointed over the objections of then-acting commissioner Tim Williams.

Last year Williams, who has retired, spoke out against the appointment, telling City Press he regarded the appointment process as irregular and politically motivated. “He was appointed by the minister,” he said, referring to Mthethwa.

In the run-up to his appointment Mdluli also played a key role in an apparent campaign against the Scorpions that united both the Zuma and Mbeki factions of the ANC.

One of Mdluli’s confidants, Colonel Tsietsi Mano, was called in to pursue the investigation of Gauteng Scorpions boss Gerrie Nel.

Mano roped in Nel’s then-subordinate, advocate Nomgcobo Jiba, in a bid to have an arrest warrant issued against Nel on the eve of the planned arrest of Jackie Selebi.

When the NPA suspended and disciplined Jiba, Mdluli submitted a dramatic affidavit in her defence, revealing for the first time that crime intelligence had monitored the conversations of Scorpions boss Leonard McCarthy and quoting extracts from the McCarthy transcripts.

These intercepts were later leaked to Zuma’s attorney, Michael Hulley, and formed the basis for the NPA decision to drop charges against Zuma.

According to evidence gathered for Jiba’s disciplinary hearing, she also roped in former KwaZulu-Natal Scorpions boss Lawrence Mrwebi, who had also become concerned at the allegedly partisan nature of the Scorpions investigations.

In November last year Zuma appointed Mrwebi to head the commercial crime division in the face of reports that then-director of prosecutions Menzi Simelane had recommended someone else.

It was Mrwebi who in December 2011 ordered the withdrawal of fraud charges against Mdluli that had been investigated by the Hawks.

Mdluli was accused of personally benefiting from discounts earned on the purchase of vehicles by crime intelligence.

In doing so, Mrwebi overrode the views of Glynnis Breytenbach, and her opposition to the withdrawal of charges against Mdluli has been partly blamed for subsequent attempts to suspend her.

A well-placed source said that Zuma had gone as far as attending a function held by Mdluli to celebrate the withdrawal of charges, though this could not be independently confirmed.

Neither presidential spokesperson Mac Maharaj nor Mdluli’s lawyer responded to questions about Zuma’s meeting with Mdluli.

After the December 2011 decision of the Supreme Court of Appeal that Simelane’s appointment was invalid, Zuma appointed Jiba as acting NDPP to replace him.

The investigation under Mano went nowhere but, according to a City Press report, there was a breakthrough in 2011 after Hawks investigators found the Phakoe docket during a raid on Mdluli.

This could suggest that Mano withheld crucial information about a party official from all but Mdluli, who also sat on it.

Mdluli also brought in Mano to trace the source of a report in the Sunday Independent in October 2010, which raised serious allegations of corruption and nepotism against Mdluli and suspended national police commissioner Bheki Cele.

The report appeared to have been sourced from disgruntled crime intelligence members in KwaZulu-Natal, and Mdluli instructed Mano to establish the source of the leaks against him. At the time he was given this sensitive task, Mano was out on bail in connection with his alleged involvement in the assault of a robbery suspect.

He had also been slammed by a North Gauteng High Court judge for his alleged involvement in the torture of traditional healer Madimetja Phineas Kutumela, a suspect in the murder of Constable Francis Rasuge, who had disappeared in 2004.

Mano is understood to have laid the blame for the leaks at the door of a senior counterintelligence officer, but the KwaZulu-Natal complaints seem to have formed the basis for the recent purge of senior crime intelligence officers in the province, driven by acting national commissioner Nhlanhla Mkhwanazi.

Earlier this month, CIS provincial boss Deena Moodley was transferred out of crime intelligence and replaced by Brigadier Thuso Tshika.

Tshika, described by someone who knows him as “more of a politician than a policeman”, is a former MK operative.

Moodley is perceived as being close to Johan Booysen, the head of the Hawks in KwaZulu-Natal.

Both minister Mthethwa and acting commissioner Mkhwanazi have been at the forefront of efforts to suspend Booysen, who on Thursday succeeded in having his suspension overturned in court for the second time.

The claim against Booysen is that he failed to act against members of the so-called Cato Manor Organised Crime Unit “death squad” that fell under his indirect command.

The unit, involved in a number of suspicious deaths, was disbanded by Mkhwanazi, but the move against Booysen is widely regarded a an indirect blow against Cele, of whom he was considered an ally.

It is understood that Hawks boss Anwa Dramat, to whom Booysen reports, believes there is no real case against him, but — as with the termination of the Mdluli investigation — has complied with Mkhwanazi’s instructions.

The determination to unseat Booysen may, however, have more to do with the Panday case than with Cele. In court papers, Booysen claimed the campaign against him is driven by millionaire Durban businessman Thoshan Panday and the provincial supply chain police boss Colonel Navin Madhoe.

Booysen’s Hawks have been investigating the pair for allegedly massively inflating hotel bills for police accommodation sourced by Panday’s companies.

Panday appears to have powerful friends. Two independent sources, who declined to be named, have claimed that Zuma’s son Edward had attempted on several occasions to speak to Booysen about Panday.

Another source, who also declined to be named but is regarded as close to Cele, said that Deebo Mzobe, a distant relative of President Zuma, had also sought to intervene on Panday’s behalf in a meeting with Cele.

Contacted for comment, Mzobe denied this. “No, that is not true,” he said. “We talk a lot with the commissioner [Cele]; we have a lot of things we discuss. I can’t say specifically what I go there to talk about.”

Mzobe denied he was in business with Panday. “Not at all; there is no business we are running together. I know him —we discuss [business], but we don’t have a particular business together.”

The M&G has identified at least three companies that show both Panday and Mzobe registered as directors. Mzobe, who is described as a “friend” of the president, is involved in the Masibambisane Rural Development Initiative with Zuma in Nkandla and elsewhere.

The project is controversial, as it is seen as using presidential influence to push state resources in the direction of favoured communities.

eThekwini municipal manager out on bail, but signing off tenders

The NPA is investigating eThekwini municipal manager Sipho Nzuza to determine whether he broke his bail conditions while back at work.
Read more
National

The corruption-fraught metro is coming to grips with having a municipal manager who is on bail for graft, yet has returned to work
Read more
National

The spate of arrests for corruption continues apace in Gauteng and the Eastern Cape.
Read more
National