Syria urged to avoid civil war as violence rages on 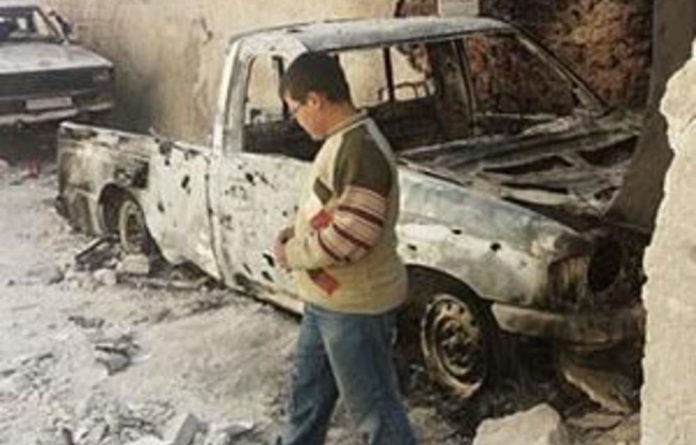 Syrian forces sent shells crashing into a rebel neighbourhood of Homs for a seventh straight day on Monday, monitors said, hours after Russia warned Damascus it must act to avoid civil war.

The military assault came as Syrian opposition factions were gathering in Istanbul in a bid to close ranks ahead of a Friends of Syria meeting in the same city on April 1, and Turkey announced the closure of its embassy in Damascus.

The crisis in Syria was also discussed in Seoul at a 90-minute meeting between US President Barack Obama and Russian counterpart Dmitry Medvedev, officials said.

Five people were seriously wounded in the onslaught aimed at flushing out regime opponents, according to the Syrian Observatory for Human Rights, a Britain-based monitoring group.

The bombardment of Khaldiyeh, a rebel bastion in the central city of Homs, began on Tuesday last week and has continued daily since then, killing dozens of people, according to monitors.

The violent crackdown on dissent by President Bashar al-Assad’s regime, which monitors say has seen more than 9 100 people killed in the past year, was one of the top priority issues discussed between Obama and Medvedev at their meeting in South Korea ahead of a nuclear summit, officials said.

‘End the bloodshed’
Obama acknowledged in comments to reporters after the talks that there had been disagreements over the past few months between the US and Russia, an ally of Assad’s regime.

But he said both agreed “we should be supportive of Kofi Annan’s efforts to end some of the bloodshed that is taking place in Syria”, and that the goal was to have a “legitimate” government in Damascus.

Annan’s plan calls for a halt to fighting, with the government pulling troops and heavy weapons out of protest cities, a daily two-hour humanitarian pause to hostilities and access to all areas affected by the fighting.

It also calls for the release of people detained over the past year of the uprising against Assad.

Before flying to Seoul, Medvedev warned that Annan represented the last chance for avoiding a civil war in Syria.

Russia has been facing mounting Western and Arab calls to step up pressure and stop delivering arms to Assad’s regime.

Civil war
Medvedev’s comments on Sunday appeared to be aimed at Assad.

“This may be the last chance for Syria to avoid a protracted and bloody civil war,” Medvedev told Annan at a meeting in Moscow.

“We will be offering you our full support at any level at which we have a say,” said Medvedev.

Annan replied that he expected Russia to play an “active” role in making sure that both sides followed the points of the UN Security Council-backed initiative.

The UN-Arab League envoy is expected in China on Tuesday to shore up backing for his efforts from the two UN Security Council members that have blocked previous efforts to condemn Assad’s regime.

China has also expressed support for Annan’s mission amid signs of quickly waning support for Assad from his traditional friends.

Syria’s Muslim Brotherhood said a meeting of Syrian opposition factions in Istanbul on Monday ahead of next Sunday’s Friends of Syria gathering, would unify most of the dissident groups, who so far have been unable to present a common front.

“Ninety percent of the opposition parties will be united by April 1, under the umbrella of Syrian National Council,” the Islamist group’s leader Mohammed Riyad al-Shaqfa told reporters.

“Activities at the Turkish embassy have been suspended from this morning,” the source said on condition of anonymity, adding however that the consulate in the northern city of Aleppo would remain open.

Ankara has become increasingly strident in its criticism of its one-time ally over Assad’s crackdown on protests in Syria.

On the ground, besides the assault on Khaldiyeh, security forces carried out dawn raids in the eastern hot spot of Deir Ezzor, in which 16 people were arrested, the LCC said in a statement.

Raids were also staged in villages of southern Daraa province, cradle of a year-old popular uprising against Assad’s regime which has spread across the country.

The security operations came after a night of protests against the Assad regime.

In the central city of Hama, many marched through several neighbourhoods late Sunday night to denounce the raids carried out during the day by troops in search of regime opponents, activists reported. — Sapa-AFP