Woods back on form after 30-month absence 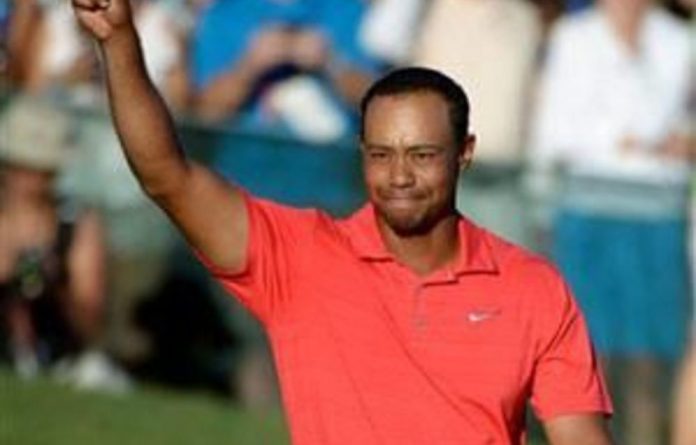 Two weeks after another injury scare, and two days before his former coach’s book goes on sale, Tiger Woods looked dominant as ever in that red shirt on Sunday to win the Arnold Palmer Invitational.

It was his first PGA Tour victory since a sex scandal at the end of 2009 led to one of the greatest downfalls in sports. And with the Masters only two weeks away, Woods looks more capable than ever of resuming his pursuit of Jack Nicklaus in the majors.

Woods closed with a 2-under 70 for a five-shot win over Graeme McDowell.

The question two weeks ago was when he could play again. Now, it’s whether he can get back to the player who once ruled golf.

Even though he won the unofficial Chevron World Challenge last December, this was meaningful for Woods — a full tour event against a strong field, and a performance so clean that he was never seriously challenged on the back nine.

The final hole was a mere formality, and Woods tapped his putter on the ground waiting for his turn, knowing that 30 months without a win on the PGA Tour was about to end. He walked off the green with his arm extended, waving his cap to a raucous gallery.

“It does feel good. It feels really good,” Woods said before signing his card. “It’s been a lot of hard work.”

Career list
Woods finished at 13-under 275 for his 72nd PGA Tour win, one short of Nicklaus for second place on the career list. But that’s not the record Woods wants. He has 14 majors, four short of the Nicklaus standard as he tries to end a four-year drought at the Masters, which starts April 5.

“I am excited, no doubt,” Woods said. “I’m looking forward to the momentum I’ve built here.”

It was the first time Woods had all four rounds under par since he returned from his personal crisis at the 2010 Masters.

McDowell made a 45-foot birdie putt and a 50-foot eagle putt early in the round to try to stay close, though he was never closer than two shots after starting with a double bogey. He closed with a 74.

Ernie Els failed in his bid to get into the Masters. The three-time major champion started the final round three shots behind but twice missed par putts inside 3 feet and shot 75. He would have needed a two-way tie for second to crack the top 50 in the world. Instead, he tied for fourth and will have to win the Houston Open next week to avoid missing the Masters for the first time since 1993.

This day belonged to Woods, as it used to at Arnie’s place.

Practice round
Only two weeks ago, Woods was taken off Doral in the middle of the final round with tightness in his left Achilles tendon, the same injury that caused him to miss three months last year, including two majors. It turned out to be a mild strain, and Sunday was the eighth straight day that Woods played golf — starting with a practice round last Sunday at Augusta.

His injuries have received more attention in the last year than the personal life crisis that cost him his marriage and corporate support. But in the last week, Hank Haney’s book, The Big Miss, was mailed out to various media outlets, another distraction for Woods.

The book goes on sale on Tuesday, and while it deals mainly with Haney’s six years teaching Woods, it raises questions about Woods’ fascination with the Navy SEALs and whether that contributed to his injuries, and it portrays Woods as self-centred and rarely satisfied, a side of him that Woods has sought to keep private for so many years.

The win at Bay Hill, his record seventh in the event, puts the focus back on golf.

“He was a man on a mission today,” caddie Joe LaCava said. “He was pretty jacked up. He was out there to prove himself.”

Woods goes to number six in the world, his first time back in the top 10 since May 22. He had gone 923 days — dating to September 13 2009 — since he last won on the PGA Tour at the BMW Championship. And it was his first win on any tour since November 15 2009, when he won the Australian Masters at Kingston Heath.

Missing mystique
Twelve days later, Woods ran his car into a fire hydrant and revelations poured on about his extramarital affairs. He has not been the same since then, and players began to wonder if his mystique could ever return.

This was a step. A big step. Woods renewed his reputation as golf’s greatest closer, winning for the 38th time in 40 attempts when he had the lead going into the final round.

It was McDowell who took down Woods in shocking fashion at the end of 2010 by rallying from four shots down to beat him at the Chevron World Challenge, something long considered unthinkable. And it was McDowell, speaking for so many others on tour, who suggested last August that the red shirt on Sunday was not as intimidating as it once was.

McDowell gave Woods a big cushion on the opening hole when his approach buried so badly in the bunker that only the top half of the ball could be seen. He blasted out through the green into another bunker and made double bogey. That gave Woods a three-shot lead, and McDowell never got closer than two the rest of the way. — Sapa-AP