US and China agree to coordinated response to N Korea 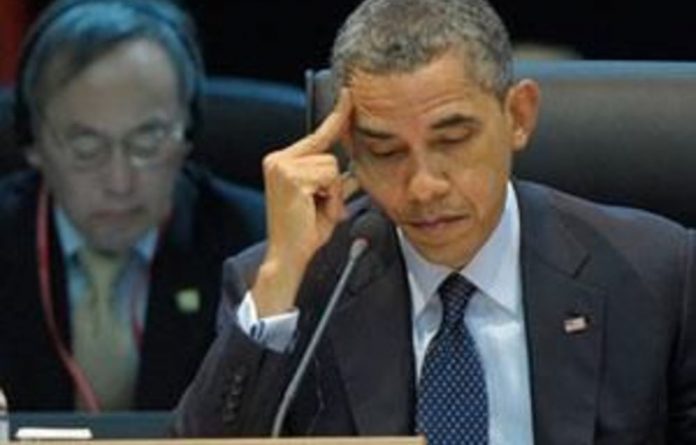 The US and China have agreed to coordinate their response if North Korea goes through with a planned rocket launch next month, a day after Barack Obama urged Beijing to use its influence to rein in its unpredictable ally.

Speaking at the start of a two-day summit on nuclear security in the South Korean capital, Seoul, Obama said China and the US had a shared interest in preventing nuclear proliferation.

“We both have an interest in making sure that international norms surrounding non-proliferation, preventing destabilising nuclear weapons, is very important,” he said.

Obama and the Chinese president, Hu Jintao, did not elaborate on how they would respond to a North Korean missile launch, which is expected to take place between April 12-16 to coincide with the centenary of the birth of the country’s founder, Kim Il-Sung.

“The two leaders agreed to coordinate closely in responding to this potential provocation and if necessary consider what steps need to be taken following a potential launch,” a senior White House aide said.

More pressure
But the early show of unity is a step forward after the US leader chided China, North Korea’s biggest benefactor, on Sunday for failing to exert more pressure on the North to abandon its nuclear weapons programme.

During bilateral talks on Monday, Hu told Obama that the North Korean issue remained “very sensitive”, according to China’s official Xinhua news agency. “We do not hope to see a reversal of the hard-won momentum of relaxation of tension on the [Korean] peninsula,” Hu was quoted as saying.

“China has expressed those concerns before and North Korea has continued on with its behaviour,” he said. “China needs to look at whether it needs to be doing more above and beyond the types of messages and warnings it’s been giving to the North Koreans.”

South Korea and Japan have said they will shoot down the missile if it passes over their territory. “We are preparing measures to track the missile’s trajectory and shoot it down if, by chance, it deviates from the planned route and falls into our territory,” a South Korean defence ministry spokesperson said.

Violating UN ban
The North insists that the rocket, whose main component has reportedly been moved to a launch site in the country’s north-west, is designed to carry an observation satellite into orbit.

The US, South Korea and Japan, however, say the launch would violate a UN ban on missile activity as the same technology could be used to develop long-range missiles, including those capable of striking the US mainland, possibly within five years.

The show of unity by the US and China, however ambiguous, will not be welcomed in Pyongyang, according to North Korea experts.

Shin Jong Dae, a professor at the University of North Korean Studies in Seoul, says North Korean provocations are partly motivated by a desire to divide the US and China over their response.

“North Korea doesn’t want to see an improvement in Sino-US relations, so to rupture relations between China and US, it opts for military adventurism, just as it did with the sinking of the Cheonan, bombing Yeonpyeong island and conducting missile tests,” he said.

Shin added that China’s main concern was avoiding political instability in the North. “The best-case scenario for China is a stable North Korea without nuclear weapons. The worst-case scenario is an unstable North Korea. But if China can’t achieve that ideal, then it will at least try to avoid the worst possible alternative. That means it will tolerate a North Korea with nuclear weapons, as long as it remains stable.”

‘More isolation’
The planned launch has put on hold a deal reached last month that would have required North Korea to suspend long-range missile tests and its uranium enrichment programme in return for 240 000 tonnes of US food aid.

In a speech to students at Hankuk University in Seoul, Obama warned North Korea’s new leadership under Kim Jong-un not to invite “more isolation” by developing nuclear weapons.

“By now it should be clear,” he said. “Your provocations and pursuit of nuclear weapons have not achieved the security you seek, they have undermined it. Instead of the dignity you desire, you are more isolated.”

His comments may also have been directed at Republicans who are seeking to exploit what they see as Obama’s failure of diplomacy on North Korea in an election year.

“The US doesn’t want to do anything that will result in North Korea conducting nuclear tests or missile launches or anything that would be detrimental to the Obama administration,” said Kim Hyun Wook, a professor at the Institute of Foreign Affairs and National Security in Seoul.

“If that happens, there could be criticism from Republicans of Obama that his diplomatic efforts with North Korea have failed. Obama doesn’t want that; it would make his re-election more difficult.” —