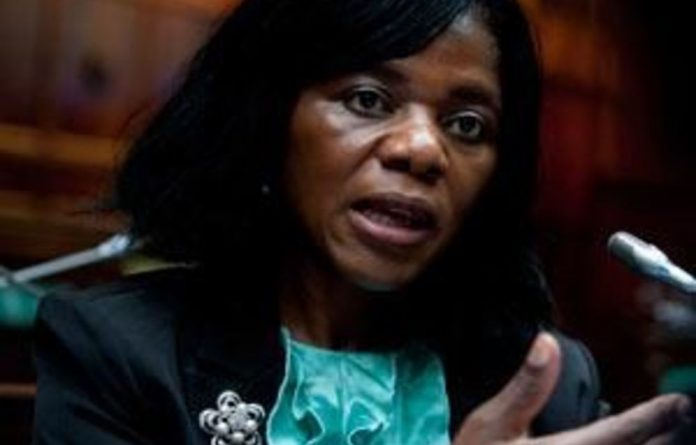 Public protector Thuli Madonsela has pleaded with parliamentarians to rethink key aspects of the Protection of State Information Bill, saying it would “severely” affect her work.

Madonsela told them on Wednesday that the Bill, as it stood, would shrink her powers and bedevil investigations into state wrongdoing.

It would reduce her to the status of an ordinary citizen because it would oblige her to hand classified information to the police like anyone else.

Likewise, it would strip away the right she held to access classified information in the course of her duty, instead forcing her to go to court to obtain it like any other South African.

“The public protector is directly affected by this Bill,” she told the second day of public hearings in Parliament on the contentious draft law.

“We will not be toothless but we are going to function under more onerous circumstances.”

She said the obligation clause 15 of the Bill created for those who received classified information to hand it to the police to avoid prosecution posed the risk of her being arrested while she was studying any of the secret documents delivered to her office almost daily.

“Will I be affected? Yes, severely. At the moment I’m not chasing around trying to find out what documents came to my office and which police station do I rush to report it. I don’t want to do that.

Perilous exercise
Madonsela said that at the moment she had the prerogative to scrutinise any information sent to her office to see how it should be handled, but this would become a perilous exercise if the Bill were passed.

“What if I am arrested while I’m applying my mind?” she asked, adding: “Probably the same could happen to journalists.”

Madonsela tactfully suggested that the Bill’s impact on her office was one of a number of unintended consequences of the legislation but baulked when ANC MP Nosipho Ntwanambi asked why the person in her post should not be treated in the same manner as ordinary South Africans.

“When a member of Parliament says you should be subject to the same rights and responsibilities as a person in the street, it scares me.

“My responsibility is to be some kind of buffer between the state and the citizen.”

Madonsela said she did not believe the Bill should include a special exemption for her office but rather a chapter recognising the special status of all similar institutions, in the same manner that it enshrined the special powers of courts.

“What I am asking Parliament to accept is that chapter nine institutions were created by you as an accountability mechanism, and you should give them the space to exercise that responsibility.”

Wholesale publication
Madonsela called for the inclusion of a public interest defence in the Bill, rejecting State Security Minister Siyabonga Cwele’s oft-repeated argument that this would lead to the wholesale publication of state secrets.

“Will it open the floodgates? No, I don’t think so.”

She said such a defence would have to withstand an objective test on whether the public good derived from publication of a classified document outweighed the risk to the national security.

Like many other critics of the legislation, she said its definition of national security was too wide and it could pave the way for over-classification.

Asked whether she was flatly declaring the Bill unconstitutional, Madonsela declined to answer but impressed on MPs that rethinking the Bill could spare them the potential embarrassment of having it declared invalid by the courts.

“You have the power to prevent this matter being settled by a court of law,” she said. — Sapa