Zuma in India for Brics summit 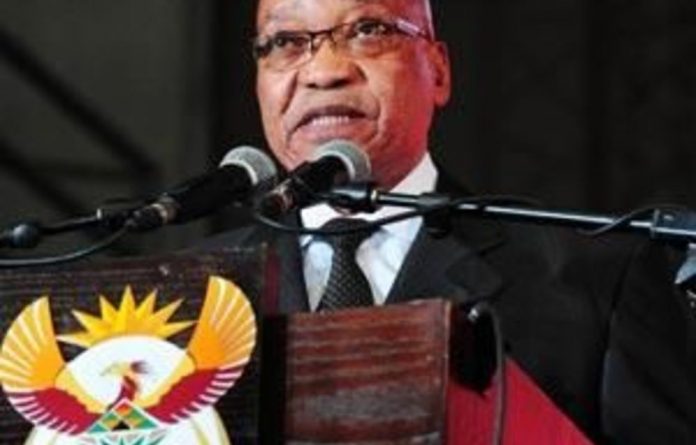 Zuma was leading a government and business delegation on the country’s second visit to the summit with representatives of the Brazil, Russia, India, China and South Africa (Brics) trading block, set for Thursday and Friday.

South Africa was admitted to the bloc in China in 2011.

The 2012 summit would look at global governance as well as sustainable development matters.

The presidency said South Africa would also use the summit to help advance the African agenda in seeking support from Brics partners for infrastructure development and industrialisation initiatives.

He said Zuma expressed interest in cooperating with Russia in engineering, especially with the training of South Africans in Russia.

“The president also raised interest in cooperation in mining, especially the operation of the ore line from Sishen iron-ore deposits to Saldanha harbour.”

Maharaj said Russia had expressed interest in cooperating with South Africa in the construction of nuclear power plants.

South Africa’s integrated resource plan of 2010 indicated that nuclear power should form part of the energy mix by 2030, with the first plant coming on line as early as 2023.

A happy partnership
In his meeting with Rousseff, Zuma welcomed the growth in trade relations between the two countries.

“We are very happy with the partnership between South Africa’s Airports Company [Acsa] and Invepar of Brazil, to run Brazil’s most prominent international airport of Guarulhos for the next 20 years.

“More such ventures and opportunities could be created between South Africa and Brazil, to the benefit of both countries’ industries,” Zuma said.

He said he was happy that Brazil’s largest construction company, Odebrecht, was due to establish an office in South Africa.

“This opens up possibilities for greater private sector collaboration.”

South Africa also sought cooperation with Brazil in energy, to assist further diversify the country’s energy portfolio, both in terms of sourcing and in the mix of energy supply.

Brazil boasts some of the world’s largest oil and gas reserves. It is the second largest producer of ethanol in the world.

The latest economic figures indicate that South Africa’s trade with Brics countries increased between 2005 and 2010.

Standard Bank’s global head and director of structured trade and commodity finance Craig Polkinghorne said trade just between India and Africa alone could double to $100-billion in the next few years.

This could happen if the continent and one of the world’s fastest growing economies fully exploit their trade potential.

“This would bring India a step closer to the level of China, whose two-way trade with Africa reached a record $115-billion in 2010 according to Chinese officials,” he said.

Polkinghorne said with India on a path of sustained and rapid economic development, there was no shortage of opportunities to deepen trade relations much further.

Factors that could drive the growth between the countries include African agricultural and mineral commodities to meet the demands of India’s growing population and rapid economic growth.

“India’s close proximity to Africa means that commodities from the continent could be shipped quicker and cheaper compared with other markets such as China and Europe,” said Polkinghorne.

Agriculture is the ripest avenue
He said the biggest opportunity for growth in the Africa-India trade relations was in agriculture.

Polkinghorne said India and China were going to import more food in the coming decades because of their growing populations, and strained capacity to produce enough from their own resources.

Rising incomes and urbanisation were leading to dramatic increases in food consumption in India, now among the countries that consume the most food in the world.

The coronavirus epidemic has thrown issues such as gross income and ownership inequality into the spotlight, as we try to find ways to navigate through this crisis
Read more
Advertising
Continue to the category
Education