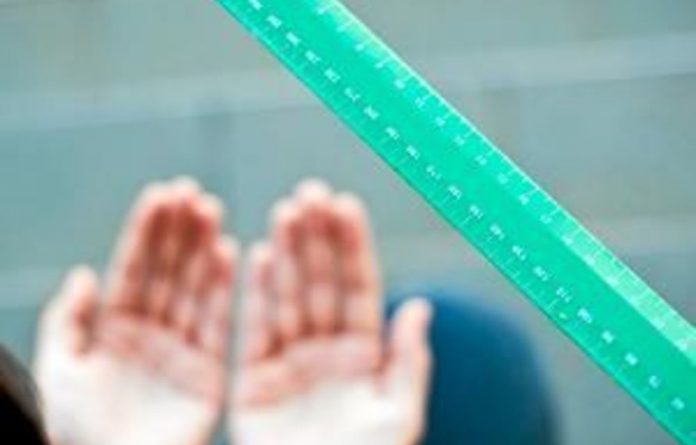 Corporal punishment is rife in Gauteng schools, even though it is unlawful, according to Childline. The children’s rights body said more than 300 cases were reported to its Gauteng crisis line last year.

However, nationwide statistics of its incidence are not available from the basic education department, a worrying factor, say experts, who warn that the scant figures do not adequately reflect the extent of the problem because of a gross failure to report incidents.

“From April 2011 until February this year, 350 cases of [alleged] corporal punishment were reported to the Gauteng crisis line,” Childline director Lynne Cawood told the Mail & Guardian. The figure represented mainly calls from Gauteng, but included some calls from other ­provinces, she said.

“They do this in class discussions but rarely report it during one-on-one discussions,” she said.

Corporal punishment figures
The national education department is not able to provide an overview of its prevalence. Spokesperson Panyaza Lesufi said the figures for corporal punishment were with provincial departments and could be sourced from them.

Pupils do not report corporal punishment because they fear victimisation by teachers, experts say. Reporting incidents is further discouraged because of parents’ and teachers’ relentless belief in its effectiveness to discipline pupils, as well as ignorance of its danger and unlawfulness. The prevailing attitude is that physical punishment is the norm.

Four Kwazulu-Natal teachers were arrested last week for allegedly beating a pupil so severely that he needed surgery on one of his testicles.

Last month the M&G reported allegations that a teacher at a Pretoria school stuffed papers into a pupil’s mouth before hitting him. In a separate incident, the teacher hit another pupil so hard that he allegedly temporarily lost his hearing in one ear.

A Gauteng pupil was lashed on the buttocks 340 times last year, resulting in internal bleeding and possible kidney damage.

The spokesperson of the South African Council of Educators, Themba Ndhlovu, said the council had received 161 complaints of corporal punishment since April last year, but warned that these incidents were “grossly underreported”.

“Society is not reporting incidents — and provincial education departments are not reporting them as they should be, so the media doesn’t have figures for what is going on,” he said. Only incidents in which a child was “severely injured by a teacher” were reported.

He said it was worrying that the education department was not able to provide a national overview of how many incidents were reported.

“If those statistics are just sitting with provincial departments, how will national departments know that this is a crisis and how will the minister know about it?”

Parents ‘believe’ in it
Corporal punishment was maintained in schools by parents who “believe” in its effectiveness to discipline children, he said.

“I know for a fact that a good number of parents believe that removing corporal punishment is creating a crisis in education and must be bought back.”

Ndhlovu remarked on recent “serious consequences” of corporal punishment, for example, “a pupil lost an eye in the Eastern Cape after being beaten, a Limpopo pupil had two fingers broken and a KwaZulu-Natal pupil allegedly died after being caned in 2010”.

It is still used in many schools because it was “part of our culture”, she said. “Parents say: ‘I was given a good hiding at school, I turned out okay, so what is the problem?'”

Nala said its use was particularly prevalent in rural areas where access to information was poor, resulting in many parents and teachers not knowing that the practice was illegal and pupils not knowing their rights.

Teachers needed to be empowered through training in alternatives to corporal punishment, such as positive teaching, she said. “We need to find ways of talking to our children about what behaviour we would like to see.”

Gertie Pretorius, director of the centre for psychological services and career development at the University of Johannesburg, told the M&G that teachers resorted to corporal punishment because they had “not found good enough alternatives to it yet”. She cautioned that, where corporal punishment was administered, pupils “learn that violence is some kind of a solution to problems”.

“Lessons on violence come from multiple sources, such as the media, and then you are subjected to it by the people you trust [teachers and parents],” she said. “There is a direct link [between] this and violent crime in our country.”

In the 2010-2011 financial year, 128 incidents of corporal punishment were reported to the Gauteng education department. Spokesperson Charles Phahlane said the department had a zero-tolerance approach to the practice, which it referred to as “assault”.

Depending on the severity of the case, punishment of teachers ranges from a three-month suspension without salary to dismissal and being struck off the Council for Educators’ roll, he said.

The department had provided training to teachers on “alternatives” to corporal punishment, he said, including the concept of detention and a demerit points system.

Spare the rod and spoil a system of institutionalised abuse

Corporal punishment is illegal in South Africa, but many of us are old enough to remember when it was still standard practice.

I received “cuts” (as they were dysphemistically called) on more than one occasion. Yet I turned out alright. So is corporal punishment really a problem?

Yes. In fact, there are a number of reasons why the use of corporal punishment is a bad idea, particularly in the South African context. The most obvious of these is the danger of traumatising the pupil. Millions of South Africans are survivors of abuse and much of it goes unreported. It is impossible to know whether the child bending over a chair in preparation for a beating is already dealing with a beating (or worse) suffered at home.

Indeed, abuse is one of the reasons why some children have difficulty concentrating in class in the first place. And make no mistake, corporal punishment works as a punishment only if it provokes a combination of pain and fear. So, the degree to which it is an effective punishment is also the degree to which it is likely to aggravate trauma in the pupil. But let us put the sjambok to the other cheek: what about the teachers: surely they will be aware of this problem? Sadly, not. This is firstly because much abuse goes unreported, and secondly because, sometimes, it is the teacher who is the problem.

It is a disturbing psychological fact that, in any large group, you will always find a few who enjoy inflicting pain, some for sexual reasons, others simply to feel powerful. But the outcome, in the context of corporal punishment, is the same: systemic abuse, endorsed and facilitated by the very institutions that are meant to support children.

One must also consider what message corporal punishment sends to pupils. After all, schools are places of learning, at least in theory, and teachers lead by example. Corporal punishment sends a clear message that teachers are in charge only because they have the ability to inflict pain. I am certain some of our nation’s children learn this lesson all too well.

Why then is corporal punishment still used?

Tradition plays its part. Teaching is an incredibly difficult profession (anyone who doubts this should really give it a try; they will not last a semester), so teachers tend to stick with what works. If you have used corporal punishment for 20 years without (as far as you can tell) seriously damaging someone, then you may well be unwilling to change.

Similarly, school cultures have a certain amount of momentum that is unconsciously reinforced by everyone in the school. Changing them once they get going is extremely difficult.

Indeed, changing a school from corporal punishment to a more positive form of discipline requires a huge amount of effort and needs to be ­co-ordinated across the entire school. With our teachers so overworked, this can be almost impossible.

Additionally, many approaches to positive discipline require individualised plans for students. These are simple systems of reward and punishment that are tied to the pupil’s behaviour. But each of the pupil’s teachers must be told how the plan works, which behaviours fall under the scope of the plan and so on. Each teacher must then apply the plan and apply it time after time. If a negative behaviour goes consistently unpunished, or an earned reward is consistently unbestowed, the plan is likely to provoke even worse behaviour from the student, because they have now learned that teachers are incompetent.

But imagine, if you will, trying to keep track of five or six individual discipline plans while teaching a class of 40 students and you will see the problem. Perhaps American educationist LouAnne Johnson (her book, My Posse Don’t Do Homework, was turned into the movie Dangerous Minds) could do it. I certainly could not.

But we must persevere, because the truth is that we do not have a choice. Whether it works or not, whether the alternatives are difficult or not, whether changing it will be hard or not, the fact remains that corporal punishment is just abuse by another name. And our country has more than enough of that already. — Andrew Verrijdt

Andrew Verrijdt is an educational psychologist

There are few programmes that deal with mental illness, so the cycle can continue for generations