In bun we trust 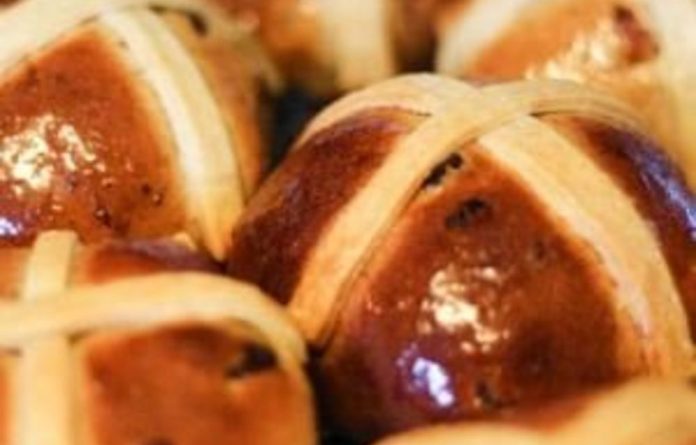 The furore around Woolworths’ tasty confectionary — the esteemed hot cross bun — has forced the Mail & Guardian to step up and pit religious and non-religious types against each other to settle the debate.

The Cape Times reported on Thursday that people had written e-mails and used social networking sites to voice disapproval of the use of a Muslim mark on a food that had special significance for Christians.

The Muslim: Faranaaz Parker
Let’s set the record straight for anyone who might think that an imam prayed over their hot cross buns.

For Muslims, anything that God has decreed to be permissible is halaal. Halaal could be used to speak about the type of businesses you can invest in or the kind of jewellery you can wear.

Mostly though it’s used to talk about food. There are all sorts of rules about which foods Muslims can and can’t eat, and things get tricky when it comes to ritual slaughter.

But fish, fruit and vegetables aren’t slaughtered so they’re an easy choice.

Your hot cross buns are made entirely out of vegetable products so there’s no need for anyone to pray over the batter while the baker stirs in currants and citrus peel.

The stamp on the package simply signals to Muslims that it’s okay to eat those buns — not that someone prayed over them.

So if you want to get mad at someone for making your buns halaal, don’t get mad at Woolworths or the halaal authority who sold them the right to put a stamp on the packaging. Get mad at God. He made the vegetables in your hot cross buns halaal.

The sad part here is the solution we’ve arrived at — the same buns packaged differently so Christians who have issues with a crescent moon stamp can eat hot cross buns and Muslims can eat the exact same buns but labelled “spiced buns”.

And we wonder why the atheists just laugh at us.

The Christian: Verashni Pillay
Christianity is simple right? A baby was born a long time ago and grew up to become a shaggy-haired Father Christmas who delivers presents every December wrapped in the emblematic colours of red, green and gold.

A few months later we eat the body of Christ in the form of a bun with a cross stamped atop and a few days after that we celebrate new life by eating a candy egg, symbolising the chocolatey goodness that is candy-coated paganism and hollow theology.

Wake up people. A piece of confectionary that probably dates back to the 8th century in honour of the goddess Eostre does not a Christian make.

So I have to ask my fellow Christians who penned those angry and insulting mails, comments and petitions demanding that the hot cross bun be de-Islamed: have you actually read the Bible? You may be surprised to find there is actually no mention of holy egg or buns.

Do a bit of Googling and make peace with the fact that the early church Christianised a bunch of pagan traditions to make the faith more palatable. But the relevance of those hangovers to our present practice of Christianity, which should be rooted in the Bible, is next to nought.

In fact, the New Testament is quite clear about what our attitude towards “holy” food should be. It doesn’t exist. As the apostle Paul put it in Romans 14:16-18: “For the kingdom of God is not a matter of eating and drinking but of righteousness, peace and joy in the Holy Spirit.” Then there’s the bit about what comes out of your mouth being far more important that what goes in.

Instead of the “peace and joy in the Holy Spirit” that we’re called to display you’ve shown yourself to by legalistic, petty and completely missing the point of our faith.

The Atheist: Chris Roper
Christians are right to be outraged and fearful at the attempt by Muslims and the Taliban-controlled Woolworths to hijack their hot cross buns.

When followers of the Goddess Eostre, in Saxon England, first noticed that their traditional buns with the four quarters of the moon cut into them were being sold in Ye Olde Woolyworthes with a cross on, they didn’t complain.

No, the idiots were all tolerant and accommodating (or “Christian”, as it used to be called). And see what happened to them! Not exactly religious flavour of the century now, are they.

No, this is obviously an attempt by fundamentalist dough-loving Muslims to put yet another crack in the solid edifice of Christianity, all with an eye to eventual religious domination.

Of course, as one of the Children of the Damned, I’m compelled to ask — why the hell (sic) do I have to have Christian titbits sold in my secular supermarket anyway?

Do I really want to munch down on an earthly reminder that millions of my fellow humans are superstitious believers who have time to read the small print on confectionery packaging? Next thing they’ll be stopping us buying wine on Sundays. Oh, wait …

But the most terrible thing is that — brace yourself — Easter bunnies are also halaal now! These cute, holy little beasties, famously described in the Old Testament (Numbers 13: 21-22) as “And Thumper begat Bre’er Rabbit, and Bre’r Rabbit begat Bugs, and Bugs begat Miffy, and Miffy had a lesbian thing with Jessica Rabbit”, are also going to be subsumed to the cause of Islamic Imperialism. And these are people who slaughter animals alive in their Satanic halaal rituals! Poor bunnies!

Christians need to fight back. Where’s Mel Gibson when you need him.

The Jew: Toby Shapshak
Nice. Everyone gets to argue about hot cross buns which we can’t eat because it’s Pesach. Typical. While everyone gets to nosh on pastries and Easter eggs, we have to eat unleavened bread which gives you constipation. This is what it means to be Jewish really. Yiddish has lots of words of sorrow and idiots. Happiness and joy not so much.

Other religions
If you feel your religion hasn’t been represented here on the crucial hot cross bun question, please mail us. Hindu, Buddhist, Used Car Salesman, Scientologist: Be the Bun!

Paddy Harper: Sho’t left for rights, so pay up