‘People’s president’ on the defensive 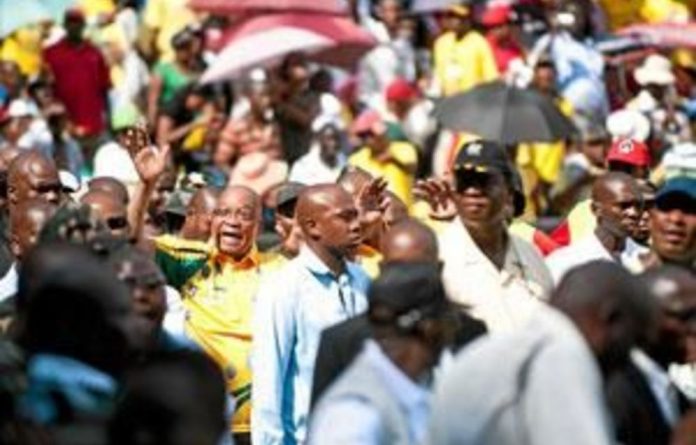 As the battle for leadership positions in the ANC intensifies, President Jacob Zuma has tightened up his security. His intelligence advisers are insisting that all who attend party and government events where he is speaking must be accredited, probably to avoid ugly scenes such as those witnessed during a speech in the Western Cape last month.

Zuma’s lecture on the ANC’s second president, Sefako Makgatho, was disrupted by angry ANC Youth League members, who heckled him in front of international dignitaries and demanded to know why former league leader Julius Malema was expelled from the ANC.

Since then, Zuma’s intelligence chiefs have been taking no chances and have barred anyone without proper accreditation from attending his public meetings.

The decision has angered some ANC leaders, who accused him of using state security agencies to fight internal party-political battles in the run-up to the party’s elective conference in Mangaung. Zuma is facing an internal revolt by militants in the party who want to replace him with his deputy, Kgalema Motlanthe.

Unaccredited members turned away
Last week, many ANC community members in Middelburg in Mpumalanga who could not produce accreditation were turned away by Zuma’s heavily armed security detail. Zuma was delivering the Zacharias Mahabane memorial lecture, part of the ANC’s centenary celebrations.

According to Clarence Maseko, the youth league’s provincial secretary in Mpumalanga, hundreds of people were turned away at the entrance of the town’s Steve Tshwete Hall.

“The memorial lecture was convened under a big cloud of paranoia. The Steve Tshwete banquet hall has a capacity of 5 000 people but only 2 500 [people] were allowed because they were accredited,” said Maseko. “[Even] people from around the area [Ekangala region] were turned away and not invited, as is tradition. They [ANC leaders close to Zuma] made sure people who attended were from outside.

“They bussed in cronies from the Ehlanzeni and Gert Sibande regions [Mpumalanga Premier David Mabuza’s strongholds] because they sing praises of him and President Zuma. The people close to Mabuza and some intelligence agents thought the people from around would embarrass the president and disrupt his speech,” Maseko said.

ANC spokesperson Keith Khoza this week said that the accreditation of community members was part of the party’s efforts to improve event management. He said the Middelburg and recent Human Rights Day Kliptown events were not the only ones where people had to be accredited.

“We did this during the Siyanqoba rally held at the FNB Stadium last year,” he said. “The ANC could account [for] each and every person in that rally. It’s a [new] system we are using — Those without accreditations can listen to the president on TV or radio. A lecture is not like public meetings; it’s intimate.”

Zuma becoming the new Mbeki?
However, some ANC leaders and critics of Zuma said it was a clear sign that the president was losing touch with the masses. A senior ANC leader said Zuma had become inaccessible even to some of the senior members of the alliance.

“To secure a meeting with President Zuma can take years now. In the past, he was available to the leaders of Cosatu and the SACP [South African Communist Party], rightwingers, church leaders, bereaved families, but all this is now impossible,” the leader said.

Political analyst Zamikhaya Maseti said the first victims of inaccessibility to Zuma were the working class who made up Cosatu. “They supported him with their lives in the run-up to Polokwane and now they deeply feel a sense of betrayal and alienation from a man who they thought would be a better listening president than his predecessor, Thabo Mbeki. But now, like Mbeki, whom they accused of aloofness and arrogance, he is always on international travel and is nowhere to be found on the ground,” Maseti said.

ANC Veterans’ League president Sandi Sejake said the issue of accreditation for ANC and community members was new and foreign to the culture and traditions of the ANC.

“The ANC has changed a lot,” Sejake said. “ANC members become important only when the party wants votes. It used to be a voluntary party. Today you go and buy a person. This [accreditation issue] is part of buying people. We are departing from the culture of the ANC.”

Presidential spokesperson Mac Maharaj said: “The ANC, like any other political party or civil organisation, is responsible for ensuring that its events and functions are conducted in an orderly manner, without untoward disruption and without endangering life and property. To this end it is also able to call on the services of the SAPS, which would respond to any given situation on the basis of their own evaluation.”

“It has always been the norm. For each and every indoor activity of the ANC, such as public lectures, people are required to have accreditation so that we are able to manage issues such as capacity. We do not ask people for accreditation to [attend] rallies.”