Sabres are drawn in SKA wars 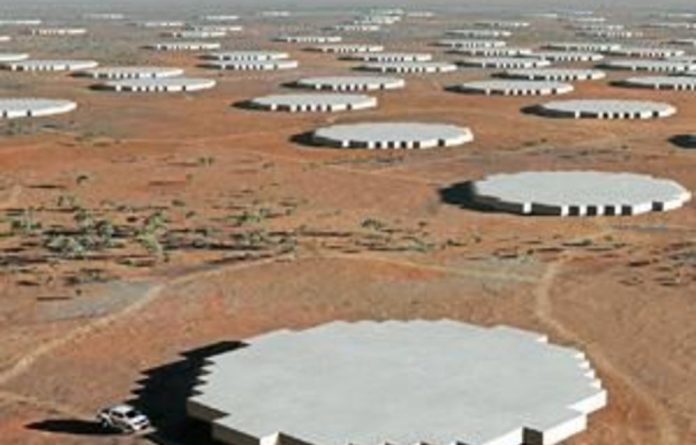 ‘It will definitely happen. It will be the world’s largest telescope and there is a lot of enthusiasm for it.”

This is the confident response of Dr Bernie Fanaroff to the question of whether the world’s largest radio telescope, the Square Kilometre Array (SKA), will ever get built. Never mind whether it will get built in South Africa or go to competing joint bidders Australia and New Zealand.

Fanaroff, project director for SKA South Africa, has been at the helm of the country’s efforts to have the world’s largest science project set up in the hinterland of the Karoo.

But the project, for which South Africa and Australia were shortlisted as the possible host sites in 2006, faces the aftermath of the financial crisis of 2008 and the sovereign debt crisis in the European Union.

State finances taking strain
These two events have put state finances under tremendous pressure and led to a dearth of international investor finance. Despite this fiscal gloom, Fanaroff believes that, given the lead times in the SKA effort, there is ample time to find the €1.5-billion, if not more, needed to build it.

The eight countries that form the SKA Organisation, a non-profit body leading the telescope’s development, have already committed the €69-million needed for the preconstruction phase.

The signatory countries are Australia, China, Italy, the Netherlands, New Zealand, South Africa, the United Kingdom and, most recently, Canada, which was admitted earlier this month.

Fanaroff’s comments come amid recent media reports that the SKA site advisory committee has recommended South Africa as the preferred site for the telescope.

The news broke early this month in the Sydney Morning Herald. It was followed up by, among others, the scientific journal Nature, which reported that the panel had made a decision in favour of South Africa.

The site advisory committee, an independent specialist panel, made its recommendation to the SKA Organisation’s board in mid-February.

The member countries were expected to take a decision on the preferred site at a meeting to be held on April 3. But a communiqué from the board of directors noted that a decision was unlikely. Instead, the April 3 meeting is expected to “be the start of a process of discussion and negotiation between the members”.

SKA benefits
Negotiations are likely to include discussions on how the SKA can be inclusive and benefit all the members of the organisation.

Nature reported last year that one proposal put forward by European astronomers was to “modestly expand” South Africa’s SKA prototype, known as MeerKAT, and the Australian Square Kilometre Array Pathfinder and combine their signals. This could address the funding gaps as well as other challenges, such as the computer processing power needed to sift though the vast amounts of data the SKA will generate, Nature reported.

However, this proposal was made before the recommendation reported by the Sydney Morning Herald.

The question of data processing power is critical to the SKA. It is expected to generate a reported exabyte of data [one million terabytes] each day, which, according to SKA South Africa, rivals the amount of data of the world’s internet traffic.

If the Herald and Nature reports prove to be correct, it could mean that the entire, or the major portion of, the telescope will be built here. It remains unclear how long this negotiation process will take, or whether some kind of accommodation can be reached.

Fanaroff refused to comment on this speculation or the concerted effort made by Australia in recent months to peg South Africa’s bid as a developmental one, relying on sympathy rather than science.

The Australian newspaper quoted the country’s science minister, Chris Evans, as saying international “sympathy” to do more in Africa was working against Australia’s bid.

But this week Science and Technology Minister Naledi Pandor came out swinging against the leaked reports and assertions that the “pre-eminence of South Africa’s bid” was nothing more than a “sympathy” decision.

This was “not a very subtle attempt to undermine the scientific and technical rigour of the site adjudication process”, she said in a statement.

Bids can’t be split
Pandor did, however, agree with comments by Evans that there was no scope to split the bids. “If the leaked reports on the recommendation of the [site advisory committee] are indeed accurate and there is no ‘scientific or economic’ basis for the split decision, then it’s entirely logical to expect that the Southern African site will be preferred,” she said.

“We were not surprised at the outcome of the [site advisory committee’s] deliberations as reported in the Australian press, because we have always been confident of the scientific and technical strength of our bid.”

But South Africa recognised the need for all SKA member countries to be part of discussions “to ensure that all parties contribute to and derive benefit from the ultimate success of the global SKA project”, Pandor said.

Fanaroff said that any other positive outcomes for an African-hosted site, such as scientific research and development on the continent, were additional benefits to the sound competitive advantages of Africa’s bid.

The work done to develop South Africa’s bid has yielded a host of radio-astronomy milestones. They include the Karoo Array Telescope, or KAT-7 — named for the seven dish antennas in the heart of the Radio Astronomy Reserve, the intended SKA site, near Carnavon in the Northern Cape.

This will be extended into the MeerKAT (literally more KAT), which will result in an additional 64 telescopes being added to the array. It will come on stream for scientific observation in 2016 and already has five years of observation time booked by researchers from around the world. And come what may in negotiations on the SKA, until it is built, the MeerKAT will be the largest radio telescope in the southern hemisphere.

Regarding technology, Fanaroff said that it has been acknowledged that not all the technologies will be in a “mature state” for the first phase of SKA construction.

“But that in itself is not a bad thing,” he argued. The telescope had to be designed in a way that allowed it to take advantage of advancements in technological processes.

“The later you design and buy these things, the cheaper and more powerful they are.”