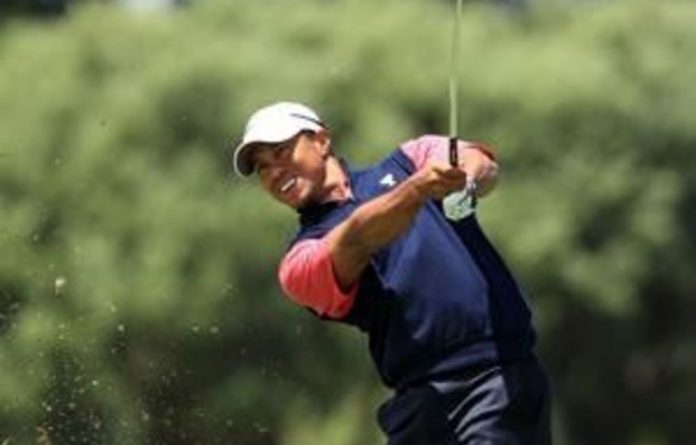 Tiger Woods and Rory McIlroy passed each other on Sunday at Augusta National last year, two players from different generations who appeared to be headed in opposite directions.

Now, headed into Masters 2012, they’re on a collision course — each taking a path over the last 12 months that would have been difficult for anyone to chart.

It all started last April 10.

Woods, with four green jackets among his 14 majors, made up a seven-shot deficit in nine holes and was poised for his first comeback win in a major. But instead of the Masters not starting until the back nine on Sunday, that’s where it ended for Woods. He didn’t pick up another shot the rest of the day, and then a week later mentioned a “minor injury” to his left leg that turned out to be much more than that.

It would be nearly four months until Woods completed another tournament, and he fell out of the top 50 in the world.

McIlroy was on his way to the greatest collapse by a 54-hole leader at the Masters in more than a half-century. The tee shot behind a cabin left of the 10th fairway. A three-putt from two metres on the 11th, and a four-putt from four metres on the 12th. The lasting image was Boy Wonder burying his head in the crook of his arm after a wayward tee shot on the 13th. He shot 80 that day.

The devastation gave way to a coronation two months later, however, when the 22-year-old from Northern Ireland shattered the US Open scoring record and won by eight shots at Congressional.

McIlroy has won twice and finished no worse than third in nine of his last 12 tournaments and his win at the Honda Classic a month ago made him the second-youngest player (behind Woods) to be number one in the world, even if the top ranking lasted only two weeks.

Career drought
That made him the favourite among bookies — until Woods ended a 30-month drought on the US PGA Tour by winning the Arnold Palmer Invitational three weeks later.

A chance for redemption for McIlroy at the Masters. A chance for Woods to resume his pursuit of Jack Nicklaus’ record 18 majors.

“It was definitely a defining moment,” McIlroy said of blowing a four-shot lead last year. “It could have been the crossroads of my career. I could have did what I did on Sunday at Augusta and let it affect me, maybe go into a slump or feel down or feel sorry for myself. I had enough good people around me not to let that happen.

“I was able to go down the right path, and do the right things, and to put everything right and win the next major.”

Woods has been stuck on 14 majors since he won the US Open at Torrey Pines in 2008 on a badly damaged left leg. His last win at the Masters was in 2005, his longest drought in any of the majors.

He has withdrawn from two tournaments since last year, the most recent at Doral because of soreness and swelling in his left Achilles tendon. One week changed everything. He made a hard course at Bay Hill look easy and won by five shots, just like he used to do.

“I’ve gone into Augusta with wins and without wins,” Woods said. “You’re looking for one week, that’s all. Hopefully, everything comes together for that one week. I understand how to play Augusta National. And it’s just a matter of executing the game plan.”

Tiger and Rory
It is easy to get wrapped up in the “Tiger and Rory” show at the Masters when it starts on Thursday.

But the 76th edition could be so much more.

From the season opener at Kapalua, where Steve Stricker won the Tournament of Champions, all the right players are winning going into the first major championship of the year.

Phil Mickelson appears to have discovered his putting touch and shot 64 to win at Pebble Beach for his 40th career tour win. Bill Haas backed up his FedEx Cup title with a playoff win at Riviera. McIlroy went to number one in the world until Luke Donald won a four-man playoff at Innisbrook and regained his number one ranking.

Eight players from the top 20 in the world already have won this year.

“Augusta is always the most exciting event, just because it’s the first major, a lot of exciting things are happening in golf, a lot of the big names are doing well,” Donald said. “Tiger is making a mini-comeback. All of the pieces are falling into place.”

Topping last year will be a tall order.

In one of the most exciting final rounds in Masters history, eight players had at least a share of the lead on the final day. Charl Schwartzel delivered a finish that matched the quality of the final round. He became the first Masters champion to close with four straight birdies for a two-shot win over Jason Day and Adam Scott.

Leading characters
There hasn’t been this much anticipation about the Masters and the leading characters, since 2005 when seven of the top 10 in the world had won tournaments going into the Augusta, including multiple wins for Woods, Mickelson and Ernie Els.

Woods ended up winning his fourth Masters. Not many could have imagined he would go six years without another. This year, however, might be as good of a chance as any.

He hardly practiced in 2010 after missing four months as his personal life caved in around him, yet Woods tied for fourth. He had not finished closer than seven shots all year in 2011, showed up at Augusta and nearly won again.

What happens when he is swinging well (which he is) and has more confidence (he does) than he has in three years?

His win at Bay Hill gave him 72 for his US PGA Tour career, and someone mentioned to Woods that if he were to win the Masters, it would tie him with Nicklaus for second on the career list with 73 wins. Woods smiled when he heard the question. It’s not the statistic most people associate with Nicklaus, least of all Woods.

“Yeah, well, that’s nice,” Woods said. “But I’m looking forward to more of the green jacket part of it.”

(The closest McIlroy ever got to the green jacket was on a private plane to Malaysia after the Masters, with Schwartzel on board. They posed for a picture, the South African in a green jacket.)

It revealed a comfortable side of McIlroy, evidence that this would not crush his spirits, much less his career.

Aftermath
Then again, he showed that in the immediate aftermath of his meltdown. Woods shot 67 and could not get away from a TV interview quickly enough. McIlroy faced reporters in the locker room after his 80, looking everyone in the eye, making no excuses.

He returns as a US Open champion. That four-shot lead he took into the last round a year ago now is looked upon as an example of what he can do, not what he didn’t. What’s new is the attention, the heir apparent to Woods.

“It will be very different,” McIlroy said. “I wasn’t necessarily under the radar last year, but I’ll be going in there with a lot more attention, a lot of scrutiny, because of what happened last year. The spotlight will be on me, and it’s something that I’ll just have to deal with. But I’ll try to … approach it like I did last year – at least for three days, anyway.”

The Masters will add a minor wrinkle for the opening round when Gary Player joins Nicklaus and Arnold Palmer as the honorary starters. Otherwise, the course has not changed significantly since last year, except for some new hole locations now available on the 16th green.

What has changed is the outlook.

Even as Woods was out for three straight months, and two majors, golf was being handed over to youth like McIlroy, Schwartzel, U.S. PGA champion Keegan Bradley, major champions Martin Kaymer and Louis Oosthuizen. It was in good hands.

And now, Woods is back to join them. — Sapa-AP