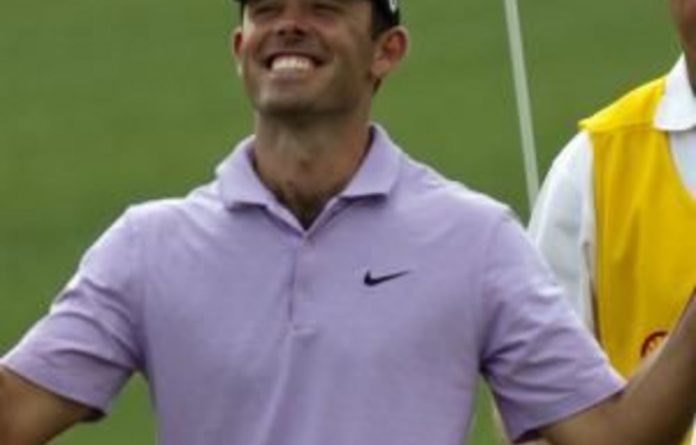 After seeing how Charl Schwartzel sizzled last year with birdies on the last four holes to win the Masters, Augusta National is not letting him near a grill for the Champions Dinner.

The 27-year-old South African has not won a title since capturing a six-man battle on the back nine at last year’s Masters, but shared fifth at Miami and fourth at Doral in March at tuneups for a title defence that begins on Thursday.

“People want to see whether you can live up to the challenge,” Schwartzel said. “But that’s something I have to get around in my head not to worry about. I have to go out there and treat it as a new tournament, just give it my best.”

But he will not be able to serve as a cookout grill master for the annual Masters Champions Dinner as he had hoped.

“Well, I can’t do it myself, put it that way. They are still going to do it but they are going to have a chef doing it,” Schwartzel said.

“I do that full-time at home. That’s something I would like to do. It’s a shorter time period. They do it only in a couple hours. So they said it would be nice if we can all just chat more instead of someone cooking and stuff.”

Schwartzel will take his place among the green jacket winners after a thrilling rally last year to overtake Adam Scott, who settled for second with fellow Australian Jason Day, leaving the Masters as the only major golf prize never won by an Aussie.

“To close off any tournament with four birdies would be a fair task. But to do it at the Masters, I think it was something very special,” Schwartzel said.

“The last thing you are thinking about is that you have made four birdies. You’re thinking, ‘I’m trying to win the Masters.'”

Schwartzel was among six players to lead the tournament on the back nine on Sunday, and just when it seemed his chance had passed, he gained a stroke with a birdie on the 15th.

Birdieable
“I still say that was the biggest birdie for me out of the four. That got me going,” Schwartzel said. “I thought 16 is pretty birdieable, especially with that flag. When the flag is on the right side, it’s a tough hole, but with the Sunday flag we’ve seen a lot of birdies. It’s a slope that feeds to the hole.”

Schwartzel matched Scott’s birdie to sustain the tension, but said he felt an unusual calm in his closing march.

“That later stage in the tournament you are trying to control the emotions and control what you are doing more than worry about what he’s doing,” he said. “I was executing some good shots and gave myself some opportunities.

“For some reason that whole week, especially those last few holes except for the 18th tee, I was very calm, calmer than I normally am. That played a big role in me executing the shots I did and making the birdies.”

Schwartzel had also practiced on hard, fast greens before the Masters, preparing himself for the amazing undulations Augusta National offers. And he had spoken with some of the world’s top putters about how to play at Augusta.

Learning to respect curving paths
“The biggest thing you actually learn is to make a small stroke,” Schwartzel said. “It worked out for me. I felt really comfortable even when I had fast putts.”

Schwartzel also spent hours studying every break and roll of the greens, learning to respect curving paths to the hole that are at times astonishing.

“The greens at Augusta are the biggest factor, the thing the guys are most concerned about,” he said. “You can actually use them to your benefit more than what it should be a disadvantage or that you should be scared of them.

“You really need to know them like the back of your hand. I practiced for about six, seven weeks before I got there to putt on those fast greens. I think that’s what made me feel so comfortable. I wasn’t scared of the greens at all.” — Sapa-AFP

Nicklaus: I expect Tiger Woods to beat my record