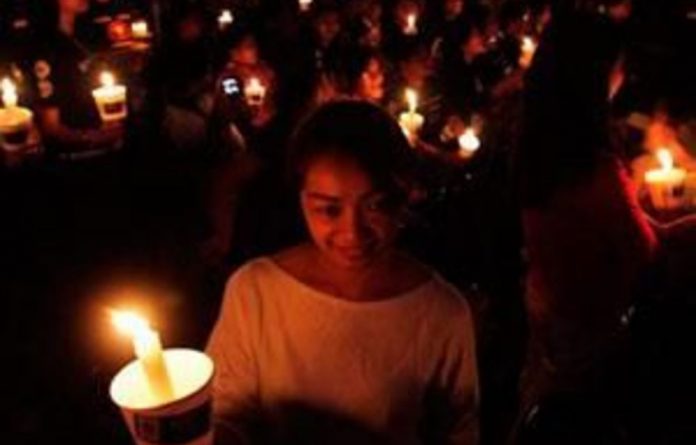 Millions of people have, throughout the day, been turning off their lights for Earth Hour in a global effort to raise awareness about climate change that will even be monitored from space.

From Egypt’s Tahrir Square to New York’s Empire State Building, thousands of cities will turn off lights for 60-minutes from 8:30pm local time, with switches flicked in around 150 countries and territories.

Newcomers to the Sydney-led initiative, now in its sixth year, include Libya, Iraq and the International Space Station, which will watch over the event as it rolls across the globe.

“There is no better way to raise awareness for the future of the most beautiful planet in the universe,” Andre Kuipers, an astronaut who will share photos and live commentary as he views Earth Hour from space, said this month.

Since it began in Sydney in 2007, Earth Hour has grown to become what environmental group WWF organisers say is the world’s largest demonstration of support for action on carbon pollution.

“And we’re seeing hundreds of millions of people in different countries around the world take actions to go beyond the hour in support of positive actions for climate change and the planet.”

Sydney’s Opera House and Harbour Bridge was among the first landmarks to plunge into darkness from 0930 GMT, and was followed by the likes of Tokyo Tower, Taipei 101 and the Great Wall of China.

And in Singapore, 32 malls — many located in the glittering Orchard Road shopping belt — and more than 370 companies including luxury brands such as Louis Vuitton and Armani turned off non-essential lighting.

While in Taiwan, the presidential office went dim and in the Philippines, more than 1,780 police stations and training centres turned off all non-essential lights and electrical equipment.

In the Indian capital New Delhi lights at three iconic monuments, India Gate, Qutub Minar and Humayun’s Tomb will be switched off.

“We have a lot of power cuts in our neighbourhood so we’re used to going without power but my kids want to turn out the lights for Earth Hour — they’ve been learning about energy conservation at school,” Delhi mother-of-two Sangeeta Dayal said.

The power of no power
As the movement spreads across the planet buildings such as The Burj Khalifa in Dubai, the Eiffel Tower and Louvre in Paris, the cupola of St Peter’s Basilica in the Vatican and Buckingham Palace in London will dim their lights.

Earth Hour co-founder Todd Sampson, chief executive of advertising firm Leo Burnett Sydney, said the event began as an initiative to get Sydneysiders to switch off the lights on the harbour foreshore.

“We never would have predicted that it would be as big as it is now. And it is even bigger overseas than it is locally,” he said.

The movement has met with some criticism, but Sampson said this was a healthy part of the debate.

“It’s not designed, and it would be foolhardy to believe, that switching a light switch is going to save the planet,” he told reporters near the Sydney Harbour Bridge on Saturday.

“It was originally done to raise awareness, to get people to think about it and then take action in many different ways.

“I think scepticism is part of the debate. It moves everything forward.” — Sapa, Staff reporter.