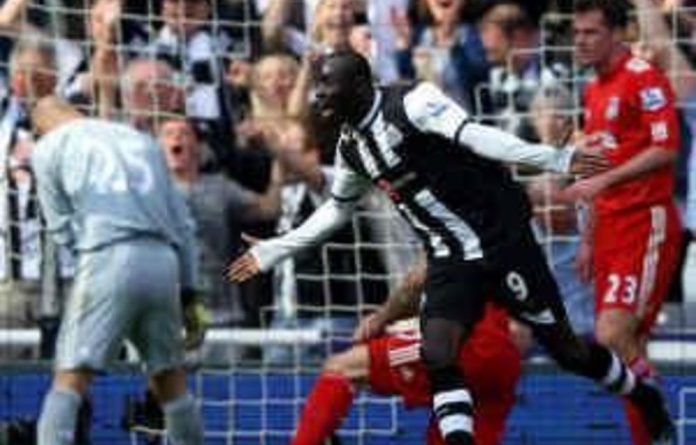 Shambolic Liverpool ended the game in disarray with 10 men as they slid to a 2-0 defeat at Newcastle on Sunday, with Andy Carroll suffering a humiliating return to Tyneside.

A sixth loss in seven league games left the League Cup holders languishing in eighth place, 11 points adrift of their hosts, who drew level with Chelsea in fifth thanks to a third consecutive victory.

Liverpool finished the match in embarrassing fashion after a late red card for Reina to leave manager Kenny Dalglish with a mounting list of problems after his keeper was ruled out of the FA Cup semifinal with local rivals Everton.

The Spain international received his marching orders following a bad-tempered spat with James Perch, where he appeared to aim a headbutt at the Newcastle man.

With Dalglish having already used all three of his substitutes, former Newcastle defender Jose Enrique went between the posts for the last few minutes.

Carroll received a predictably frosty reception from a 52 000 St James’ Park sell-out on his first return since a £35-million move to Anfield.

Under-achieved
The England forward, who has under-achieved in his 14 months on Merseyside, again failed to find the net before being substituted 10 minutes from the end.

The 23-year-old’s frustration was complete as he saw Cisse take his tally to seven in six starts since a £9-million move from Freiburg in January.

The Senegal international has filled the number nine shirt vacated by Carroll admirably, his impressive goal record in stark contrast to the Liverpool forward’s modest return of five goals in 21 league starts.

After Martin Skrtel sent a diving header narrowly over from a Steven Gerrard free-kick, Carroll took centre-stage but in circumstances he wouldn’t have wished.

The forward found a way past Mike Williamson and Perch to surge into the Newcastle area, where, in rounding keeper Tim Krul, he fell theatrically to ground, claiming a penalty.

Well-placed referee Martin Atkinson immediately brandished a yellow card in Carroll’s direction, replays proving the official correct in his assertion the forward had dived in his attempts to claim a spot kick.

Liverpool continued to press for the opening goal, and Danny Simpson, on the line, appeared to use his arm to prevent Williamson from scoring an own goal after the ball deflected off the defender from Gerrard’s corner.

Falling behind
The visitors paid for failing to make their dominance pay, falling behind in the 19th minute.

Hatem Ben Arfa was the architect down Newcastle’s right, cutting in past Jonjo Shelvey to send over a perfectly flighted cross for Cisse, who was lurking at the far post.

The African did the rest with a powerful downward header from five yards, which found the bottom corner via the foot of the post.

Williamson nearly doubled Newcastle’s lead after half-time, heading came even closer after the break, heading against the post from eight yards.

But Newcastle didn’t have to wait much longer for a second goal.

Liverpool failed to clear a long cross pumped into their box, Demba Ba poked the ball across the face of goal to Ben Arfa, who kept the move going by finding Cisse at the far post. The striker calmly cut inside keeper Reina before finding the net from a couple of yards.

Insult was added to injury for the ineffective Carroll, who was hauled off 10 minutes from time, the forward storming straight down the tunnel after aiming a foul-mouthed outburst in response to Dalglish’s decision to substitute him. — Sapa-AFP