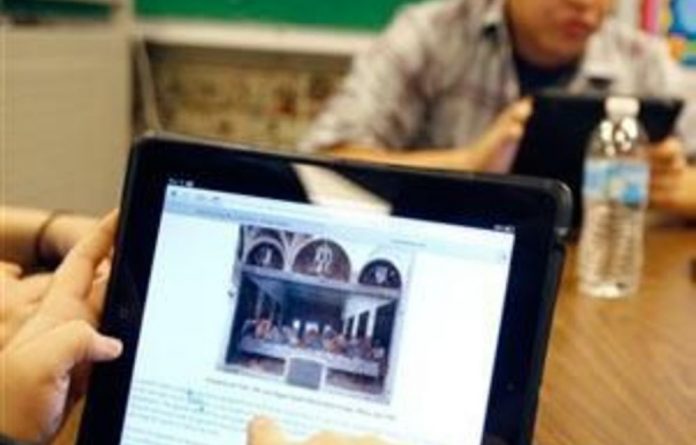 The use of iPads in schools — whether it is a disadvantaged or private school — vastly improves pupils’ engagement and involvement in lessons, the Mail & Guardian discovered at an iPad in education event.

“We get to touch and see pictures, and actually do stuff for what we are learning which is very different to just having a teacher stand up in front of the class and teach us,” said grade six pupil from private school Dainfern College, Ita Dzinotyiwei, who explained why she enjoys using an iPad at school.

The event, held last week, showcased how learners and teachers from nine Gauteng schools use the technology in their classrooms.

Dzinotyiwei showed the M&G how she uses an application called Popplet to draw colourful and creative mind maps.

Michael Browne, another grade six pupil from Dainfern College, showed the M&G a movie he made for Maths using an iPad.

“We are learning about angles now so we went outside and took photos of the angles we see around us using our iPads,” he said.

The pupils were able to draw colourful lines on the photos, label them and make a movie out of them, which they presented to their peers.

The school’s head of technology, Louise Browne, said the school has three sets of 26 iPads each, which teachers take turns in booking out.

“I am passionate about this because of what it does for the kids They come alive.”

An equally passionate teacher, Lerato Mathe who hails from the disadvantaged Unity Secondary School in Daveyton, said iPads have “brought a new attitude to learning” at the school.

“The learners used to be bored but the movement, colour and sounds on the iPad means they are interacting more in lessons”, she told the M&G.

Thirty iPads were donated to the school by the Peermont School support programme.

In the overcrowded classes that characterize a school like Unity Secondary “it is sometimes hard to move around a class with about 60 pupils and deal individually with each child”, she said.

“But they get into smaller groups with the iPads and that keeps them busy and interested.”

The M&G reported in March on the surge by private companies and organisations donating tablets, e-readers and other information and communication technology (ICT) to schools. Experts said teachers feel intimidated by the prospect of using this technology in classrooms — a problem compounded by the lack of effective teacher training in how to use these resources.

Chairperson of the Programme for Educational Tablets in Schools (Pets) Foundation, Michael Rice, told the M&G that the cultural and psychological issues around ICT in schools cannot be underestimated, yet have hardly been recognised or researched.

Although tablets provide the opportunity for learning to become more student-centred, interactive, collaborative and flexible, he said, many teachers feel overwhelmed by the technology. “You can’t simply give every teacher an iPad and leave it at that.”

Janet Thomson, executive director for SchoolNet SA, an education NGO, told the M&G that much of the ICT training for teachers provided by the private sector is ineffective in motivating them to use technology in the classroom.

“The approach of ‘this is a mouse, this is how you turn the computer on, this is how you type in Word’, is not effective. You can’t just send teachers on a week-long course, teach them how to use Word, PowerPoint and Excel and expect them to use that to engage and motivate their learners.

“Teachers will forget most of what they do not use after a while,” she said.

South Africa has welcomed many initiatives to introduce ICT into classrooms.

Kalahari.com and Pets recently donated 42 tablets to the science and mathematics at Stellenbosch University programme (SciMathUS) — a bridging course for pupils who fared badly in maths and science in matric but would like to improve their marks and enrol at university a year later.

Project coordinator for the Peermont School support programme, Sarah Benjamin, said the company has donated about 700 iPads to seven disadvantaged high schools and 18 primary schools with the aim of “equipping pupils with 21st-century learning skills and targeting numeracy and literacy”.

It was amazing to see “how excited pupils are to engage with the technology”, she said.

The iPads are not just dumped in the schools, she said, but teachers are trained in how to integrate iPad into lessons. Their skills are updated in training sessions every 10 days.

Little Ziyanda Mogamisi, a grade three pupil from Ntsikana Primary School in Daveyton, read a story to the M&G on her iPad and said she also enjoys playing the colourful Maths games the device offers.