Suu Kyi warns against violence after ‘victory of the people’ 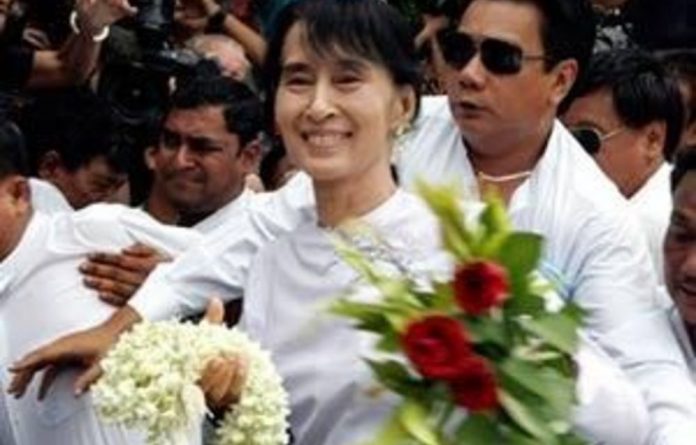 Burma opposition leader Aung San Suu Kyi hailed a “victory of the people” but warned against triumphalism after her apparent win in elections, seen as a test of the regime’s burgeoning reforms.

Suu Kyi supporters celebrated into the night after her National League for Democracy (NLD) party declared that the Nobel laureate had secured a seat in Parliament for the first time ever in Sunday’s by-elections.

The veteran activist’s election to political office, if confirmed, would mark the latest dramatic change in the country after decades of outright military rule ended last year.

“It’s normal that NLD members and supporters are happy at this moment,” Suu Kyi, who was locked up by the former junta for most of the past 22 years, said in a statement after the vote.

“But words, behaviour and actions that can harm and sadden other parties and people must be avoided completely. I would like all NLD members to ensure that the victory of the people is a dignified victory,” she added.

The NLD said that it had won almost all of the seats it contested, based on its own tally. No official results have yet been announced.

“We won 43 seats out of 44. We are waiting for the results for the last one, in northern Shan state,” said party spokesperson Kyi Toe.

Even that would not tip the balance of power in a Parliament dominated by the military and its political allies.

Voice
But as a lawmaker and opposition leader in Parliament, Suu Kyi would have an unprecedented voice in the legislative process, and her party is also already looking ahead to the next general election in 2015.

“Obviously they want to win the next election comprehensively and be able to set up a government in their own right,” said Trevor Wilson, a Burma expert at the Australian National University.

Observers say the quasi-civilian government that took power a year ago needs Suu Kyi to take a place in Parliament to bolster the legitimacy of its political system and spur an easing of Western sanctions.

US Secretary of State Hillary Clinton, in Istanbul for a meeting of the Friends of Syria group, said Washington was committed to supporting the nascent reforms in Burma that have been cautiously welcomed by the West.

“While the results have not yet been announced, the United States congratulates the people who participated, many for their first time in the campaign and election process,” Clinton said.

The Burma government has surprised even its critics over the past year with a string of reforms such as releasing hundreds of political prisoners, but ethnic conflict and alleged rights abuses remain concerns for the West.

‘Very encouraging’ signs
Unlike in the 2010 general elections, the government allowed foreign observers and journalists to witness Sunday’s polls, which were to replace MPs who gave up their seats to join the government.

“However, that’s definitely not enough to assume that it is indicative of how the process was conducted in other parts of the country and certainly not enough to talk about credibility of elections,” she said.

In the run-up to the eagerly awaited vote, the NLD decried alleged intimidation of candidates and other irregularities, and Suu Kyi said the poll could not be considered “a genuinely free and fair election”.

The 2010 election, won by the military’s political proxies, was plagued by complaints of cheating and the exclusion of Suu Kyi, who was released from seven straight years of house arrest shortly afterwards.

The NLD swept to a landslide election victory in 1990, when Suu Kyi was in detention, but the junta never recognised the result. — AFP