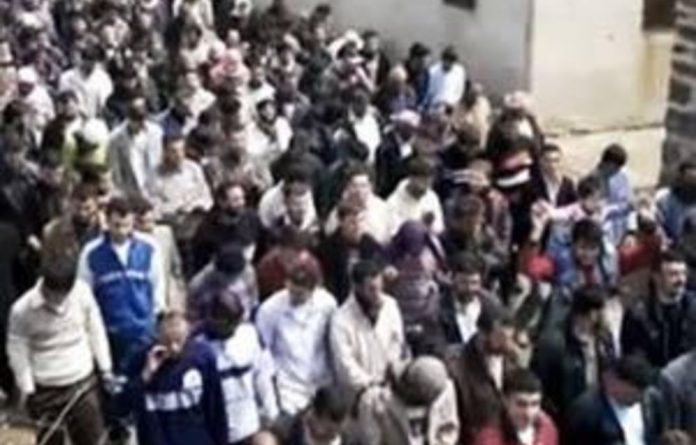 Assad has agreed to a ceasefire negotiated by international peace envoy Kofi Annan from April 10, the latest effort to end a a year of bloodshed stemming from an uprising against his rule.

An advance team from the United Nations’ peacekeeping department will arrive in Damascus in the next two days to work out how observers can monitor the truce, Annan’s spokesperson said in Geneva.

But Syrian opposition figures as well as Western governments have already made it clear they are not convinced that Assad, who has failed to honour previous commitments, would keep his word this time.

“He is a liar,” said Waleed al-Fares, an opposition activist in Homs, a city which came to symbolise the anti-Assad struggle as opposition-held areas endured weeks of bombardments and sniper fire.

Upper hand
Fares said Assad was playing for time to gain the upper hand over poorly-armed rebel forces which have been driven from city strongholds in the past two months.

Targets in Homs were coming under shelling on Tuesday, he said. Another opposition activist, Mortadha al-Rashid, said from Damascus that the western border town of Zabadani was also taking a pounding.

“The regime shows no signs of stopping. There are people being shelled in Zabadani right now,” Rashid said. “Where are Kofi Annan’s words? Because we have never seen them on the streets.”

In violence elsewhere, rebel fighters killed one soldier in a clash in northern Idlib province, according to the opposition Syrian Observatory for Human Rights, a British-based monitor which collates reports from inside Syria.

Armed men also attacked the home of a military director of logistics in Aleppo, killing two guards, the Observatory said.

Accounts of the violence can be difficult to verify because the Syrian government restricts access to Western journalists.

Over 9 000 killed
But the UN estimates Assad’s forces have killed more than 9 000 people in the past year, while the government says about 3 000 security personnel have been killed by what it describes as foreign-backed gangs of terrorists.

The opposition Syrian National Council has endorsed Annan’s six-point peace plan but made no official comment on the April 10 ceasefire target. Rebels of the Free Syrian Army have said they will stop shooting if tanks and artillery withdraw from cities.

Annan, who acts for the UN and the Arab League, told the UN Security Council on Monday he would have liked to see a ceasefire sooner. Some council members were concerned that the next week could be used to intensify army operations.

Annan’s spokesperson Ahmad Fawzi, speaking in Geneva, said the aim was to bring a complete end to hostilities by April 12.

A UN peacekeeping advance team was due in Damascus in the next two days to discuss the deployment of monitors, Fawzi said. A team of up to 250 unarmed observers is envisaged although it will require a Security Council resolution.

Shifting blame
Syria’s ambassador to the UN, Bashar Ja’afari, said Damascus would not take all the blame if the plan failed and Annan must also get the armed opposition to comply.

“A plan wouldn’t be successful unless everybody is committed to it,” Ja’afari said in New York.

Many foreign governments fear the conflict could descend into a full-scale civil war and drag in other Middle East players if it carries on much longer.

But Arab League states have backed away from earlier demands that Assad — whose family has ruled Syria for four decades — step down immediately and are focusing on Annan’s initiative, which imposes no conditions on the president.

Saudi Arabia wants the rebels to be given weapons. Egypt’s foreign minister Mohamed Kamel Amr said on Monday that this would hasten a slide to civil war.

“I hope that there would be a non-military solution to the crisis through the Arab states’ initiative,” he said. — AFP