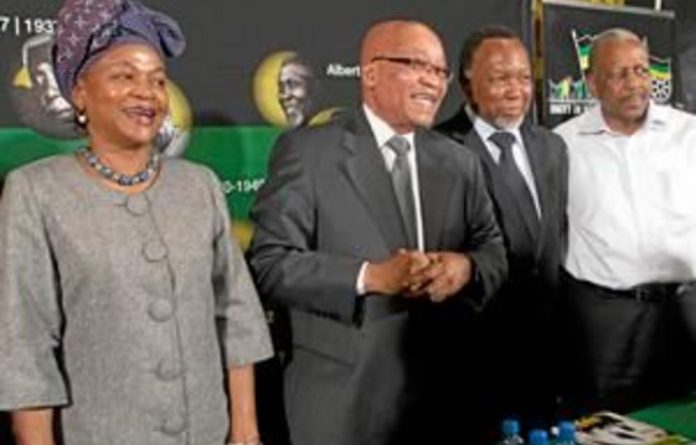 Embattled ANC Youth League president Julius Malema was summarily suspended from the ANC after the dramatic events at Luthuli House on Tuesday, during which the ANC’s top six officials put on a desperate show of unity at a rare press conference organised to deal with the youth leader.

On the surface, Tuesday’s ANC press conference was aimed at presenting a leadership in control.

But behind the scenes all hell broke loose when deputy secretary general Thandi Modise and treasurer Mathews Phosa confronted ANC secretary general Gwede Mantashe and excoriated him for failing to inform them on time and for imposing the idea of a press briefing on them.

Also on Tuesday, there was pandemonium when, earlier in the day at Luthuli House, the ANC’s military veterans demanded Malema’s expulsion for disrespecting President Jacob Zuma and calling him a “dictator” at an ANC centenary lecture last week. It prompted the youth league’s Sindiso Magaqa to defend Malema in a hastily arranged press conference in which he charged that the veterans were attention-seekers trying to impress their girlfriends.

Then, a day after the briefing, the chair of the ANC’s national disciplinary committee, Derek Hanekom, revealed its decision to summarily suspend Malema from the ANC for calling Zuma a dictator. Malema is now prevented from participating in ANC meetings, including the national executive committee, national working committee and Limpopo provincial executive committee.

Although there was no official statement from the youth league at the time of going to press, a youth league national executive council member said there was nothing procedural in the move. “The suspension was the highest level of desperation we have seen from the ANC,” said the leader.

Northern Cape behind Malema
Outspoken Northern Cape youth league chairperson Shadrack Tlhaole said that even though the ANC’s national disciplinary committee had suspended Malema from the party, he remained president of the league and would be allowed to attend its programmes and meetings.

“He can’t be charged and suspended through a press briefing,” said Tlhaole. “We are still saying that the ANC leaders should have called the youth league and the military veterans to a meeting.”

Tlhaole said Malema was scheduled to deliver a lecture at the De Aar community centre on April 18 and the suspension would not stop him from speaking to his supporters.

The Mail & Guardian has reliably learned that a war of words broke out between the ANC top brass hours before Tuesday’s press conference. The rare media briefing was intended to dispel perceptions that the party was in crisis and that the ANC Youth League was running the show at Luthuli House.

Modise and Phosa were infuriated at being informed about the media briefing only shortly before the meeting of the top six, scheduled for 3pm on Tuesday. The media briefing was set for an hour later, at 4pm.

They confronted Mantashe and reprimanded him for failing to inform them on time and for forcing the press briefing on them.

There was also drama when disagreements ensued over the emotional tone of the initial media statements and Modise and Phosa threatened to boycott the intended briefing if it was not toned down. Mantashe obliged and the harsher parts of the media statement were taken out.

Modise and Phosa not happy
A Luthuli House insider, who asked not to be named, told the M&G on Wednesday that Modise and Phosa were unimpressed with Mantashe’s apparent impetuous conduct.

“They questioned why he called the press briefing. They told him that it meant he and certain officials had met discreetly and hatched a plan to host a media briefing behind their backs,” said the source.

“Mantashe pleaded with them to be part of the briefing in order to show unity, because there was an impression out there that the ANC was divided. The two officials were insisting that he should go alone. They were refusing to go [to the press briefing].”

Approached for comment, Mantashe could not be drawn into what transpired behind the scenes.

He pointed out that if some people were not happy at a particular stage of the meeting, it did not mean they were unhappy about the decision. “Unhappiness is a feeling,” he said.

“If a person is unhappy at a particular time, it does not mean they do not agree with the decision. We went to the press conference and no one was dragged there.”

Modise, Phosa and ANC deputy president Kgalema Motlanthe are said to be unhappy about the way the disciplinary action against the youth league was instituted. They would prefer a political solution to the matter, whereas Zuma, Mantashe and ANC chairperson Baleka Mbete are bent on disciplining the Young Turks.

Youth league wants Motlanthe
The youth league has made it clear that it wants Motlanthe to replace Zuma at the party’s elective conference in December. The league also wants Phosa to take over as deputy president and Modise to retain her position. It wants Sports Minister Fikile Mbalula and Arts and Culture Minister Paul Mashatile to take over as secretary general and chairperson respectively.

At Tuesday’s media briefing, Mantashe warned ANC members not to use the party’s centenary celebrations to campaign for leadership positions ahead of the elective conference in Mangaung.

Despite Mantashe’s plea, campaigning among ANC structures has intensified. ANC members have publicly worn T-shirts bearing the names of their favourite candidates and sang songs in their support.

Although nominations officially open in October, ANC members are expected to use provincial and regional conferences between now and June to lobby for their preferred candidates for the ANC’s national executive posts.

The campaign for Zuma’s re-election is expected to receive a major boost when his close ally, Mpumalanga Premier David Mabuza, goes head to head with health MEC Clifford Mkasi and deputy chairperson Charles Makola for the position of ANC chair.

Zuma looking good
Although the youth league, Cosatu and the South Africa Communist Party have been pushing for Mabuza to step down, he enjoys support from the majority of ANC regions. In addition to Mpumalanga, Zuma is expecting support from his home province, KwaZulu-Natal, which is expected to bring 25% of voting delegates to the conference.