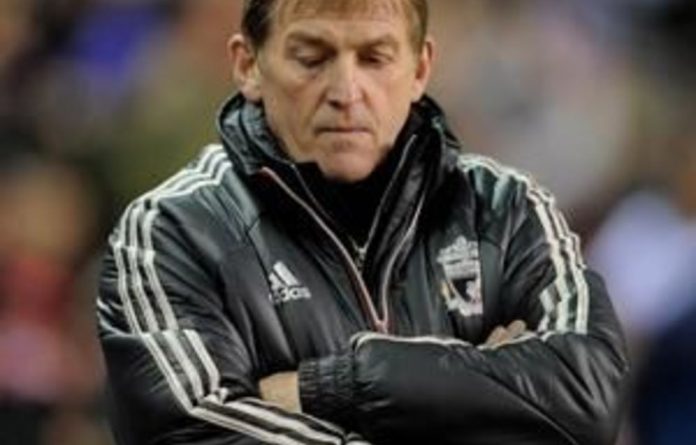 The wail of anguish was both audible and unseemly. Steven Gerrard’s attempted through pass for Luis Suarez had not been well calibrated, but the Uruguayan’s petulant reaction to a badly weighted delivery appeared disproportionate.

As Newcastle United exerted growing control during Sunday’s 2-0 win over Liverpool at St James Park in Newcastle upon Tyne, so the body language of Kenny Dalglish’s players hinted at inter-camp tensions. Even worse, a few looked ready to wave white flags.

It was an impression reinforced by a post-game tweet from Suarez. “Difficult moments after the last matches,” he posted. “We must continue to work until the end.” By the time the final whistle blew on Liverpool’s sixth defeat in seven Premier League games, Andy Carroll had stormed down Newcastle’s tunnel, swearing and looking close to tears after being substituted, whereas José Reina reflected on a needless red card after an idiotic attempted head butt. As if the club’s worst league run since 1953-1954 and a haul of eight points from a possible 36 during 2012 was not bad enough, Dalglish’s squad had added indiscipline to their problems.

In a cameo, which can be interpreted as emblematic of his waning powers, Liverpool’s manager marched on to the pitch in the wake of Reina’s dismissal, only for Gerrard to shoo him off it. Although it would be cruel exaggeration to say that represented the England midfielder’s most incisive contribution, the suspicion that Gerrard and Suarez have become disillusioned is inescapable. If Gerrard perhaps pines for the days when his perfect through balls serviced Fernando Torres, Suarez’s record of three goals in his past 19 league appearances represents a poor return for such a gifted forward.

Carroll getting the flack
Fortunately for that pair, most attention is now diverted to Carroll, the £35-million former Newcastle striker with three league goals this season. Painfully unsuited to his new employer’s playing style, Carroll must now recover from the very public, possibly misguided, humiliation of being substituted in front of his once adoring public. Should Liverpool’s American owners, Fenway Sports Group, replace Dalglish during the next few months, Carroll’s signing in January 2011 will be identified as the moment decline set in for a man still rightly revered by his club’s supporters.

In reality that ill-starred acquisition represents a symptom rather than a root cause of the malady afflicting Liverpool. When the Scot last won the title, at Blackburn Rovers in 1995, he did so with an almost exclusively British squad. Key components included a Geordie striker called Alan Shearer and a former Middlesbrough winger named Stuart Ripley, but Dalglish’s attempts to make history repeat itself at Anfield with a raft of British buys, including the Gateshead-born Carroll and the Teesside-bred Stewart Downing, threaten to ensure this season ends in tears.

Granted, the Carling Cup has been secured and an FA Cup semifinal against Everton looms, but £55-milion spent on a winger who appears to have forgotten how to cross and a centre forward whose feet seem to have turned to clay surely haunts the 61-year-old’s nightmares.

John W Henry and his Fenway colleagues must puzzle over why a man boasting a detailed know-ledge of world footballers ever paid Sunderland £20-million for Jordan Henderson, a midfielder whose promising form regressed dramatically at the Stadium of Light last season — or how he imagined that Charlie Adam could become the new Xabi Alonso.

“The biggest problem is that Adam, Downing, Carroll and Henderson between them have contributed six league goals,” said Mark Lawrenson, the BBC pundit and former Liverpool defender. “You should be looking at 25 to 30 goals between them. The four of them haven’t done it; Carroll hasn’t been the same player since he left Newcastle.”

Of Dalglish’s principal signings, the best three are Craig Bellamy, Suarez and José Enrique. Nonetheless, the latter pair cost the best part of £30-million, a sum that hardly chimes with the Liverpool hierarchy’s supposed addiction to sabermetrics. The theory underpinning the Moneyball concept, it essentially involves adopting Newcastle’s successful policy of using statistics to unearth undervalued players in unlikely places.

Winging it
In terms of media strategy, Dalglish has also been found wanting, his ridiculous defence of Suarez in the wake of the Patrice Evra affair merely serving to suggest he is operating in a public relations time warp. Charming, considerate and amusing when microphones are switched off, he publicly presents a brusque brand of circumspection that is cringe-inducing and contrasts terribly with the savvy, press-friendly personas of contemporaries such as Arsene Wenger and Harry Redknapp. Going into denial over Suarez’s behaviour and Carroll’s loss of form, the Liverpool manager sometimes resembles a child who, having covered his eyes with his fingers, believes no one can see him.

At a moment when Fenway are doubtless in scrutinising mood, Dalglish could do with moving into 21st-century mode. —