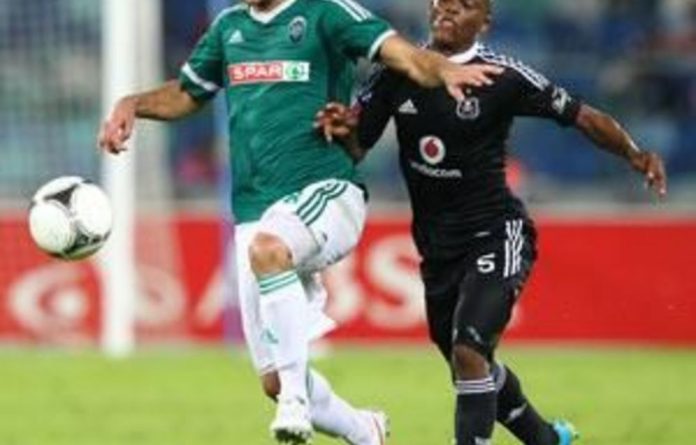 Orlando Pirates joined Mamelodi Sundowns at the top of the South African Premiership league table on Wednesday after Tokelo Ranties scored the only goal in their win over AmaZulu.

Ranties put Pirates ahead after just five minutes and they held their advantage at the Moses Mabhida Stadium in Durban as AmaZulu missed a string of chances which keeps them hanging midtable.

Sundowns were held to a goalless draw by the Golden Arrows, but despite their fifth game without a win still cling to the top spot ahead of Pirates on goal difference.

Meanwhile, the Free State Stars renewed their title hopes by climbing to fourth after a 2-1 victory over Bloemfontein Celtic.

Dove Wome scored the opener for the Stars after eight minutes, while Paulus Masehe extended the advantage after 46 minutes following a fumble by Celtic keeper Thabani Stemmer.

David Mathebula netted his ninth goal of the season in the third minute for Moroka Swallows, who whipped Bidvest Wits 3-0.

Own goal
Former Bafana Bafana captain Mbulelo Mabizela scored an own goal in the opening minute handing Swallows the lead, and a 21st-minute strike from Bennette Chenene inflicted a blow the Wits never recovered from.

Meanwhile, a 10th-minute goal from Santos star scorer Eleazar Rodgers could not keep Platinum Stars from a 2-1 victory.

Stars had a dry first half, but struck in quick succession after the break, with Vuyo Mere firing in a penalty after a Thabiso Ntloana foul, and two minutes later Patrick Malokase headed the ball into the net from an unmarked corner.

Ajax Cape Town clawed their way to a 2-1 win against Jomo Cosmos thanks to 10th minute goal from Bernard Loke.

Ranked last in the standings, Cosmos looked set for their third win of the season until Khama Billiat scored in the 81st minute, followed four minutes later by a winner off Alcardo van Graan’s foot.

Maritzburg and Supersport United played out a goalless draw. — AFP