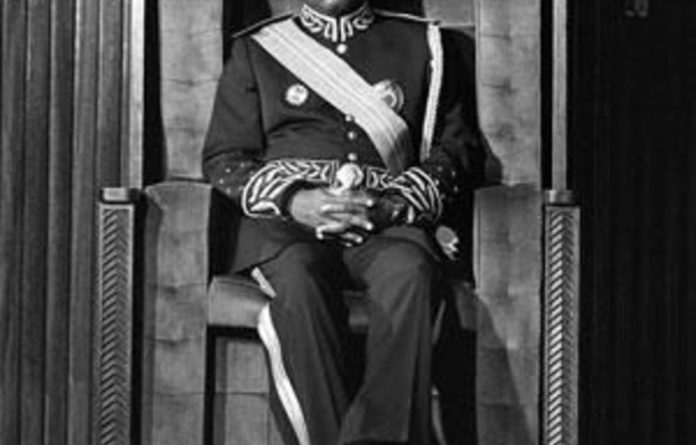 Now updated with more malfeasance and suffering, Martin Meredith’s The State of Africa: A History of the Continent since Independence (Jonathan Ball) provides a depressingly full picture of Africa in the past half-century. Told in a swift, fact-packed narrative style, it is all very readable, though as the disappointments mount up one increasingly longs for the signs of hope that are sparingly provided in some of the later chapters.

It was a small thing, however, that caught my eye. Mobutu Sese Seko of Zaire and Félix Houphouët-Boigny of Côte d’Ivoire were both long-ruling leaders of their respective countries, both supported by the West during the Cold War. Zaire under Mobutu became a byword for post-independence African kleptocracy, with Mobutu as the kleptocrat-in-chief, and Zaire (now the Democratic Republic of the Congo) still suffers from massive underdevelopment. Côte d’Ivoire, by contrast, got a reputation (in the West, at least) for being a good example of how capitalism and a reasonable accommodation of the former colonial power could help to spur growth and prosperity in Africa.

Yet both rulers stole fortunes, and each took it into his head to build a personal palace complex in his original home town — Mobutu in Gbadolite, Houphouët in Yamoussoukro. Despite the fact that neither location was anywhere near any urban centre or commercial node, millions were spent on luxurious buildings there; Houphouët even decided he had to have a cathedral bigger than St Peter’s in Rome. Mobutu did not bother to build proper roads to remote Gbadolite; he just laid down an airstrip and had his delicacies flown in from France.

Our own President Jacob Zuma’s mega-kraal at Nkandla is hardly on the same scale as Mobutu or Houphouët’s jungle citadels, but it echoes them in key ways. It is interesting that these diverse leaders should feel a need to make lavish complexes for themselves and their families in their home towns — is it like the homeboy made good in the faraway city returning to his village to impress the locals with how high he has risen? All three complexes, at least, strike the note of personal aggrandisement and accumulation, and stand (or fall) as symbols of a particular style of African leadership.

In part, it is doubtless the “Big Man” kind of African rule we have seen so much of on the continent that is on display at Nkandla. It also reflects an investment in African tradition, where a man’s building of his own homestead is a sign of patriarchal mastery, along with the dynastic ambitions that come in its trail. Some Zulu traditionalists, of course, see Nkandla as the illegitimate gesture of a commoner claiming chieftainship, for Zuma is by no means Zulu royalty — whatever the size of his kraal. In such terms, he is a usurper.

But then modern party politics, and modern means of gaining and keeping power (whether democratically or by Leninist-style revolutions and one-party states), have simply given more options to Africa’s rulers. So too has the development of partly industrialised, commercialised and monetised economies.

But usurpers are only usurpers until they have established firm rule and a solid dynasty to follow them. Look at Henry VII in England in the late 1400s: he had to claw his way to power in war and claim legitimacy through marriage, but he founded the Tudor line of monarchs; for all their flaws, they did pretty well over the next century or so to turn England into a great power. That as soon as he was king Henry devoted himself to fair and efficient tax collection, rationalised governance and the careful husbandry of resources, as well as maintaining peace, helped a great deal to erase his usurper status.

Constant contestation
The comparison with Africa today is not idle. Commentators such as Moeletsi Mbeki blame Africa’s woes on its “Big Men” — its dictators or authoritarian pseudo-democrats and their desire to enrich themselves. But what allows this to happen? Are there underlying structures that support this kind of rule and militate against the entrenchment of the democratic and free-market norms so beloved of the West?

I have often thought that, politically, most of Africa today looks a lot like Europe in the Middle Ages: the warlords in constant contestation for power, the fragility of the modern nation-state, the adherence to ethnic allegiances above “national” ones, never mind the monarchic powers that accrue even to leaders who claim to be democrats or, perhaps most strongly, those who came to power on Leninist revolutionary principles and claimed to rule with a Marxist-style concern for the alleviation of the suffering of the masses (see Angola, Ethiopia, Zimbabwe … it is all in Meredith).

After the Middle Ages, of course, into the Renaissance and even as Europe underwent the power surge of the Industrial Revolution, the wars continued. Their very names — the 30 Years’ War, the 100 Years’ War — attest to this.

In Africa’s Future: Darkness to Destiny (Profile), Duncan Clarke argues powerfully that the core issue is the persistence of African social structures inimical to the development of modern nation-states, let alone meritocratic societies, industrialised economies and free markets. His book is somewhat mistitled in that there is a lot of “darkness” and little “destiny”, whatever that destiny may be. The sub-subtitle is clearer: “How the past is shaping Africa’s economic evolution”. He is reluctant to predict major advances in terms of what the West calls progress, unless those advances be painfully slow and long in coming. Look how long it took Europe to dismantle the old aristocracies.

Clarke is refreshingly like those old Marxist historians who were unafraid to refer to “backwardness”.

For Clarke, Africa’s social structures are still weirdly feudal or medieval; its patterns of accumulation are, at bottom, what Francis Fukuyama, in The Origins of Political Order, calls “patrimonialist”. Karl Marx viewed colonialism in Africa as ultimately progressive, in that it would drag or drive Africa into modernity. But political and economic modernity in Africa today is mostly a thin, friable layer on top of an entirely different set of social structures, of which Marx was ignorant (or his faith in the unstoppable forward movement of modernity, and its speed, was misplaced). Like the national boundaries imposed by the colonialists, these modern institutions are almost phantasmic patterns that do not reflect the reality “on the ground”.

It may take centuries for such deep social structures to change. It may be that attempts to build democratic institutions in Africa will founder on such boulders. And, even if we believe that modernity can come more quickly than that notion supposes, it is not clear whether political change alone can do it. Still, it can only help and George BN Ayittey believes there are indeed ways of pushing the democratic and developmental agenda harder — and making it happen.

In Defeating Dictators: Fighting Tyranny in Africa and around the World (Palgrave), he argues with considerable force for activism to build real democracy, from the ground up, in Africa.

By the way, Ayittey claims authorship of the slogan, so beloved of Thabo Mbeki, “African solutions for African problems”. His goal, however, despite his insistence on historic, indigenous African forms of democracy and free trade, is very much Western-style democracy and a free market. (Ayittey is now an Africa adviser to the Barack Obama White House.)

Self-enriching power elites
Like Moeletsi Mbeki, Ayittey sees the “Big Men” as retarding progress in Africa (and many other places, from Venezuela to Turkmenistan). It is they, and any form of undemocratic government, who must be vociferously contested and concretely opposed. He gives bullet-point lists of the tyrants’ sins and their repressive methods — “bullet points” being an alarmingly appropriate term here. The West’s accommodation of tyrants, once a part of Cold War battles, is now a big business deal allowing the West to grab Africa’s natural resources on the cheap: it has only to pay the rentier rulers.

The state in Africa has become the tool of self-enriching power elites, and so Ayittey sees the development of strong civil-society institutions as the chief means to get such elites out of power. He lists methods of organisation, from small activist groups to militias, and measures such as “hit them with their own constitution”. He details his own efforts, in his native Ghana, to empower ordinary people and gives the “Kume Preko” (which means “You might as well kill me”) campaign against Jerry Rawlings’s dictatorship there as an example of how such campaigns can work.

This was more useful, in the event, than international observers and their reports, which, as The Economist noted, “emerge only after the battle has been lost and won”. The sitting government had no time to subvert the election and it had to concede victory to John Kufuor’s opposition.

Maybe it is not so simple as all that, but there is some hope for meaningful popular mobilisation in such ideas. Ayittey quotes the New York Times: “Let’s stop sending Africans lectures on democracy,” wrote Thomas Friedman. Rather, he said, let them have free FM radio stations; “Africans will do the rest”.

"Duduzane, like Zuma the elder, appeared to believe that he was actually above the commission"
Read more
Friday