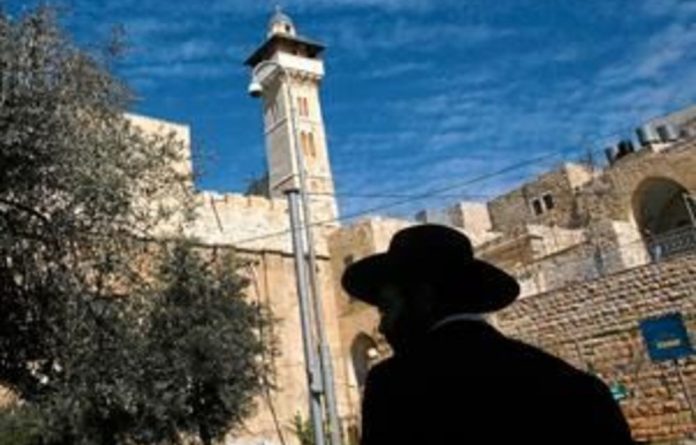 Israel’s right-wing prime minister has intervened to prevent the eviction of hardline Jewish settlers from a house in the tense West Bank city of Hebron, despite a Palestinian family’s insistence that they are the legal owners of the property.

Binyamin Netanyahu overruled his defence minister, Ehud Barak, who had ordered the eviction of scores of settlers from the property on the grounds that they had not secured a permit for purchase from the Israeli authorities in the West Bank.

Israeli policemen and soldiers detained Palestinian protesters on April 1. (Hazem Bader, AFP)
In a boost to the settlers, Netanyahu demanded the eviction be delayed to allow an investigation, for which no time frame was given. A deadline of 3pm on April 3 for the settlers to leave voluntarily passed without action being taken.

David Wilder, a spokesperson for the 500 settlers in Hebron, said: “This is not the end of the story; it’s the beginning. After this, there will be more.” Asked whether settlers were seeking to acquire more Palestinian houses in the heart of the city, he declined to comment.

A large group of settlers moved into the house, close to the religious site known as the Tomb of the Patriarchs to Jews and the Ibrahim Mosque to Muslims, in the early hours of March 29 under police and army protection. The settlers said the property, which they renamed Beit Hamachpela (House of the Patriarchs), had been legitimately purchased.

According to Hazem Abu Rajab (25), a member of the extended Palestinian family living in the large three-storey property, the occupants were woken at about 1am by Israeli soldiers, armed and wearing black, who broke down three doors to the house.

The family insisted it had the deeds and other documentation and pointed out that anyone legitimately purchasing a property would use keys rather than break down doors. “There was a lot of tension and confrontation,” said Abu Rajab.

The house has had multiple owners as it had been successively inherited by the original owner’s sons, grandsons and great-grandsons, he said. “If the settlers did buy, it was from one owner out of many. This house belongs to the whole family.” Fifteen members of the family were still in possession of a small section of the property on Monday this week.

The settlers say they submitted documentation to the Israeli authorities showing they had bought the house from a Palestinian man, who, in turn, bought it from a member or members of the family. The man is reported to have been detained by the Palestinian security services and his role in the sale is being investigated.

The Civil Administration, the Israeli governing body in the West Bank, said the settlers had failed to obtain the required permit to purchase property in the occupied territory and were therefore ordered to evacuate the house.

The Israeli authorities were also believed to be concerned about the provocative potential of the takeover in the most febrile area of the West Bank. About 500 hardline settlers live in a closed military zone in the heart of Hebron, protected by a large military presence. The city is home to 180 000 Palestinians.

Khaled Osaily, mayor of Hebron, said the sale of the house was fraudulent. “Everything is forged [and] it is not for the first time,” he told Israel Army Radio. “The person who sold to them is not the owner of the house. There was a forgery and I am certain about what I am saying.”

According to Wilder, the Israeli authorities had confirmed that the settlers’ documentation was “100% in order”, but the demand to evacuate the house stemmed from “political reasons”.

He denied the settlers’ takeover was provocative. “Any normal community wants to be able to grow, live normally, buy houses.”

Several Israeli cabinet ministers have publicly backed the settlers. “As soon as it is clear the purchase is legitimate and that there were no rights violations committed, the Israeli government should support the settlers,” said Yisrael Katz, the transport minister, who visited the house yesterday. —