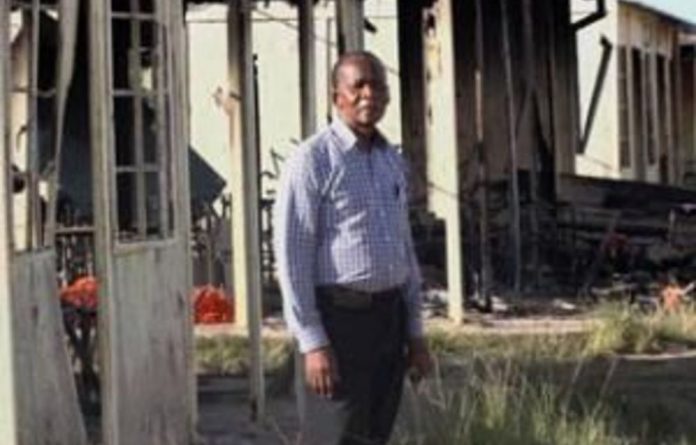 Recent widely reported disruptions of teaching and learning, all related to inadequate school infrastructure, show the urgent importance of the legal action launched last month against the government to address this long-standing problem.

Last month pupils at Menziwa Senior Secondary School in the Eastern Cape burned down their school and 98 pupils were arrested for arson.

This followed months of appeals to the provincial education department by school staff, parents and pupils to address problems such as prefabricated classrooms with holes in their walls and exposed electric wires ("We don't need no education, just some bricks in the wall", Mail & Guardian Online, March 16).

Also last month, the furore that followed Democratic Alliance leader Helen Zille's "refugee" tweet began as a political argument between her and the ANC over an overcrowded school in Grabouw, which is in Zille's domain, the Western Cape.

Such problems are not recent, either at these schools or nationwide.

Appalling infrastructure
Menziwa's infrastructure has been appalling for years. Compounding it was a tornado that damaged the school in 2010, as well as a severe storm last year. Enrolment numbers at the school dropped, absenteeism increased, matric exam pass rates declined and teacher morale plummeted.

To take only one other case of long-standing infrastructure shortcomings, consider the classroom conditions at Mkanzini Junior Secondary School near Port St Johns, on the border of the Eastern Cape and KwaZulu-Natal.

The school originally operated with five mud structures, built by the community, but these collapsed following severe storms.

In 1993 the then Transkei government intervened and four new classrooms were built late that year. These were insufficient to accommodate all the pupils and the community built three additional classrooms in 1994 with salvaged materials. But, in 2009, a fire destroyed the four permanent classrooms.

An engineer sent by the provincial education department to assess the damage found that these structures had to be torn down. But the school continued operating with the three remaining community-built structures.

These buildings could not house the school's 400 pupils and the school then used its own resources to construct another three shack classrooms. It also built another two permanent structures, using donations and money from the school's operating budget.

Diverting funds from the operating budget has prevented spending on basic and essential school materials, including furniture and ­textbooks. Teaching is impossible at times because of bad weather: the roofs leak, the windows do not have glass and the dirt floors become a marsh when it rains.

Widespread experiences
The experiences of these schools are widespread. The basic education department's 2011 figures indicate that there are nearly 25 000 public schools in South Africa.

How do we make sense of these basic infrastructure shortcomings nationally?

The legal action launched against the government last month by the non-governmental organisation Equal Education centres on one major factor: that there are still no legally enforceable regulations to hold provincial departments to account for ensuring that schools have adequate infrastructure, such as satisfactory shelter from weather conditions and all the necessary facilities.

The indispensable and empowering right to basic education is recognised by numerous United Nations bodies. In South Africa, legislation and policy since 1994 have acknowledged basic education as essential to the development of the human personality and an ­individual's sense of dignity.

The country also recognises that education is the primary vehicle by which economically and socially marginalised people can lift themselves out of poverty to participate meaningfully in society.

In the national policy for the equitable provision of an enabling school teaching and learning environment, published in 2010, Basic Education Minister Angie Motshekga stressed the importance of the physical environment in which teaching occurs.

Still no action
Despite all these clear and unequivocal recognitions, the government has still not introduced minimum norms and standards for school infrastructure — the focus of Equal Education's application in the Eastern Cape High Court in Bhisho last month.

In its suit, the organisation advances reasons for why minimum norms and standards need to be introduced urgently.

Firstly, the regulations will legally require provincial MECs of education to draw up plans on how they will meet these minimums. They will also periodically need to report to the minister on their progress, which will strengthen the national government's oversight role.

Secondly, communities, pupils, civil society organisations and the public will know what to expect from the government. A clear policy framework with defined and measurable targets will empower people to monitor the government's ­performance and hold it accountable for meeting its obligations.

Equal Education's application does not seek to prescribe the content of the norms and standards and does not ask the court to do so. The application recognises that this is the prerogative of the government, but insists that binding standards exist so that citizens can hold provinces and local officials accountable.

The failure to plan can clearly be seen in the two Eastern Cape schools mentioned. Despite their many appeals for assistance, neither school appeared anywhere on the "emergency" projects list of the provincial department's budget statement in May last year.

The need for the government to play a much greater monitoring and oversight role in the provinces is illustrated by some of the basic education department's reports to various parliamentary portfolio committees.

Severe underspending
For instance, the department awarded two grants last year, over and above the normal allocations to provinces — one of R5.6‑billion for infrastructure and another of R700‑million for infrastructure backlogs. In the Eastern Cape the department had only spent 28% of its allocated budget by the third quarter — a significant shortfall from its 75% target.

Even more worryingly, not a cent of the national infrastructure backlog grant had been spent, despite being earmarked for the eradication of mud schools in the country.

If nothing else, enforceable regulations will give the minister the power to determine how ­provinces must spend on school infrastructure and provide a means of ­evaluating actual expenditure as it happens and monitoring its progress. Binding standards will make it easier to identify problem schools and improve the planning and delivery of school infrastructure projects.

The introduction of minimum norms and standards is an essential starting point for addressing the infrastructure crisis affecting schools. Without them, many South African pupils will continue to face school conditions that are not only uncomfortable, but also sometimes dangerous. Frequently, they make any kind of learning impossible.

Motshekga and the other respondents in Equal Education's action — Finance Minister Pravin Gordhan and the nine provincial education MECs — have until April 10 to file a notice of intention to oppose the suit in the court.

Given the deplorable state of many schools across the country and how this violates not only the fundamental right to basic ­education, but also pupils' right to dignity, the introduction of ­minimum norms and standards simply cannot be seen as optional. Their absence represents perhaps one of the greatest disservices to young people in South
Africa today.

Fritz Jooste and Zenande Booi are researchers at Ndifuna Ukwazi, a non-governmental ­organisation (formerly the Centre for Law and Social Justice) that supports social-justice and human-rights ­organisations and develops activist leadership, among other aims.