SA fashion war: Designers in a twist over ‘copycat’ skirts 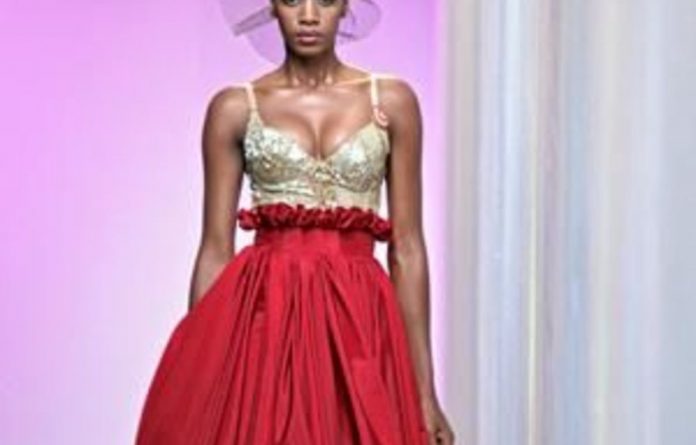 Cat fights in the fashion industry seem to come with the territory and the latest spat between designers Thula Sindi and Nkhensani Nkosi appears to be no exception. At the heart of this tiff: an A-line, high-waist skirt with frill detail on the waistband.

Sindi alleged this week that Stoned Cherrie’s Nkosi ripped of the design of his skirt that was showcased at Mercedes-Benz Fashion Week Jo’burg on March 10; Nkosi’s similar skirt hit the catwalk at SA Fashion Week in Rosebank last weekend.

“I was very surprised to see the skirt, which is remarkably similar to mine in pattern, detail and proportion, walking down the runway. Certain editors and bloggers immediately alerted me to the glaring similarity,” said Sindi.

He told the Mail & Guardian that he began exploring his design in August two years ago and developed it into the final skirt, which was part of his series of collections over three seasons.

“I debuted it officially at Jo’burg Fashion Week in February 2011 as part of the winter collection,” he said. “The skirt was [designed] to combine the decadence of a very full hemline with a slimming waistband and the whimsy of a paper-bag style frill at the waist. When I landed my deal with Edgars, the skirt was central to the collection and was in all five stores from September 2011.”

Nkosi, the founder and creative director of Stoned Cherrie, said the brand’s skirt was created at the end of 2010. “We had designed a box-pleat waist skirt before for an Amsterdam-based exhibition in Cape Town called Salon/locale in February 2011, which Harry Lekwane, one of our designers, had conceptualised before the exhibition.

“We are not aware of any copyright that Thula Sindi has on this concept and should he believe that it was stolen, then are we to assume that he also stole the concept from Prada and Fendi skirts?”

The international fashion world is no stranger to such rows. Last year, Christian Louboutin sued Yves Saint Laurent for using his signature red soles on Yves Saint Laurent shoes. In this case the conflict highlighted two facts: even though red-sole shoes were not a new concept, it was Louboutin’s brand identity. But can one company really monopolise a colour? Not according to the courts: Louboutin lost the case on appeal.

Dion Chang, trend analyst at Flux Trends who covered that battle for the Sunday Times, said that in fashion most designs had already been done before. “If you go through fashion history archives, you will probably find it,” Chang said.

“Moreover, we are inspired by osmosis and assimilation. In this day and age, with so many shared images going around, it is difficult to claim something completely as yours, because I think somebody will find something that is so similar that you could argue both sides of the coin anyway.”

But Sindi does not appear to be backing off. “Perhaps it is accidental and if so, perhaps Stoned Cherrie will be kind enough to not make the skirt commercial,” he said.

But neither is Nkosi budging.

“It is a sad day when designers resort to mudslinging before researching whether their allegations hold water. Stoned Cherrie has not been in the industry for 12 years by accident, nor by mimicry,” said Nkosi.

This rivalry seems to carry with it remnants of the long-time battle between the two fashion world doyennes: Dr Precious Moloi Motsepe of African Fashion International, which holds fashion weeks in Cape Town, Johannesburg and Africa where Sindi showed his line, and Lucilla Booyzens, of SA Fashion Week, where Nkosi showed hers.

Booyzens take on plagiarism in the fashion industry?

“Plagiarising other people’s work is completely counterproductive,” she said. “One needs to find one’s own voice, but one needs to make sure that it is plagiarism, one needs to ask oneself where the design originated.”

Perhaps Pablo Picasso said it best when he commented on the creative sharing of ideas when he reportedly said: “Good artists borrow; great artists steal.”