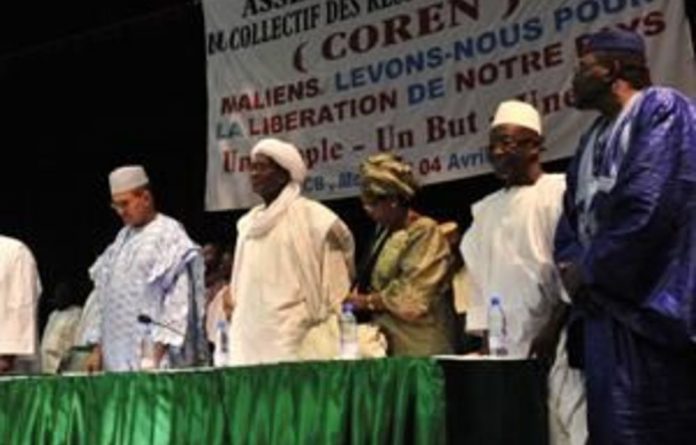 It was the middle of the day when Tabisou (72) suddenly saw people from her town, Anderamboukane, fleeing for their lives. Her family had no time to pack their things: the fighting had already begun.

“Everything I worked for over my whole life was lost just like that,” said Tabisou, sitting in a United Nations High Commission for Refugees tent at Abala refugee camp, 85km from the Mali-Niger border. “We had to leave all our animals and food.”

Tabisou is one of nearly 200 000 refugees who have had to flee their homes since January when conflict erupted in northern Mali. After Libyan rebels ousted Muammar Gaddafi in August, hundreds of Tuareg mercenaries hired by him fled back to Mali with heavy weapons to restart their own rebellion.

The main group, the National Movement for the Liberation of Azawad (MNLA), claims to fight against the marginalisation and oppression of the Tuareg and other indigenous people of northern Mali.

Tabisou and most of the refugees in Abala camp do not care much for the liberation movement.

“I am an old lady and have many grandchildren,” she said, pointing to the gaunt, grubby faces around her in the tent. “The rebels do not care about us: they treated us very badly.”

Most Songhai’s against MNLA
Most of the refugees in Abala camp are not Tuareg, but from the Songhai ethnic group. According to Ibrahim Ag Abdil, a 30-year-old farmer, few Songhai people support the liberation movement’s cause. “Mali is already a very poor country. We have to rely on the United States, United Kingdom and Europe for aid,” he said. “The MNLA are just making more divisions. How can we survive as two countries when we are barely surviving as one?”

Ag Abdil said the MNLA rebels stole all the motorbikes from his town, which belonged to civilians. After the rebels left, said Ag Abdil, bandits entered the city and looted all the shops and homes.

“We don’t know if there is even anything left,” he said. “The MNLA are not protecting civilians’ possessions. They are just attacking towns, leaving them, and then the place is empty for bandits to come and steal.”

Next to him, Ajawa (72), nodded. “They say they fight for all the Tuareg, but in fact they only fight for a few. Many Tuaregs don’t support them,” he said. “Now we’re stuck in this camp. It is painful to see my people begging for hand-outs and our children not able to go to school.”

When the rebels arrived in the town, the citizens fled and walked for two months to find refuge in Niger. At first, the refugees stayed in a makeshift camp at Sinegodar, 10km from the border. “We were always worrying about warmth at night and food during the day,” said Salima.

Several children in Abala camp are malnourished and non-governmental organisation workers are concerned about potential epidemics.

Overcrowded camp
Last weekend, the UN refugee agency and the International Organisation for Migration transferred 2 100 refugees to Abala camp, which has a capacity for 10 000 refugees.

It is estimated that about 26 000 refugees have fled to Niger, whereas the rest are in Burkina Faso and Mauritania, and more than 60 000 are internally displaced in Mali.

Antonio Jose Canhandula, who is heading the UN refugee agency’s emergency team, said his biggest concern was that the refugees were entering a food crisis in Niger. He was also concerned about the effects of the recent coup in Mali.

“The coup in Mali could mean that the rebels take advantage of the power vacuum and attempt to consolidate their positions. This would later be followed by a counterattack by the central government and result in another influx of refugees and prolong the crisis.” —