‘Scuse me while I kiss this pie 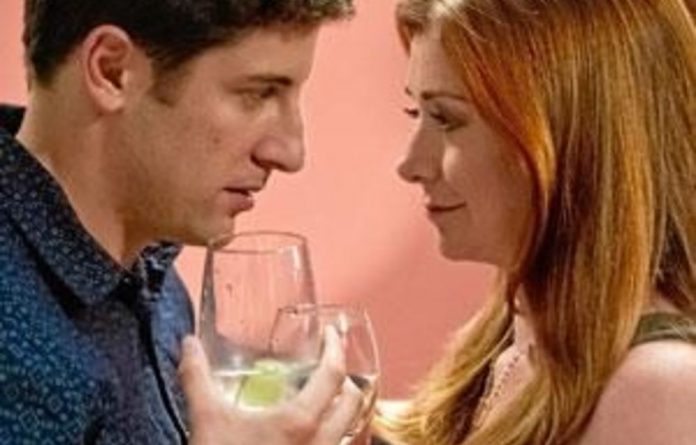 I am informed by a reliable source that I have seen at least one, possibly more, of the movies in the American Pie series. I do have a memory of a scene in one of them, in which the character Stifler is required to eat a steamingly fresh dog turd, but the rest is gone.

The references in the latest of the series, American Pie: Reunion, to earlier instalments passed me by — or, rather, some moments in the new movie had the air of being linked to other, previous moments in previous movies, but I couldn’t have said what they were referring to. A sex scene in a school’s music room? That’s got to be echoing the first American Pie, surely? I can’t see another motivating factor or logical plot reason for it, though that’s also one of the risks of this kind of comedy: laughs are more important than rationale, and forced closure more necessary than logic.

I am, at least, familiar with the idea that generated the first American Pie (1999), which was that a bunch of high-school kids about to celebrate their last days of secondary education must necessarily be in search of ways to lose their virginities.

Odd that we say people “lose” their virginity, as if it were a matter of mere carelessness — a brief moment, perhaps, of forgetfulness, in which one has absent-mindedly put one’s virginity down, in another room, and left it there by mistake.

“What have you done with your virginity, Brenda?”

“Oh dear, I seem to have mislaid it … I thought I had it right here, but no. Where the hell can it be? Do you need it, Bob?”

Growing up
It is now 13 years since American Pie, and all those virginities are well and truly lost. American Pie: Reunion has the protagonists facing the problems of marriage and career, which is to say adulthood, but don’t say it too loudly.

Jim (Jason Biggs — the one who “looks like Adam Sandler”) and Michelle (Alyson Hannigan) now have a child, and their sex life is fading; Kevin (Thomas Ian Nichols) is also married, but appears to be having some trust issues with his wife.

Meanwhile, Oz (Chris Klein) has a wildly successful career, it seems, but harbours a secret dissatisfaction with his blonde model of a girlfriend. The others are having problems with jobs and the like, or, in the case of Stifler (Seann William Scott), are simply finding it difficult to come to terms with adulthood at all.

Most of this, I suspect, will be familiar from television sitcoms. At any rate, it all has a pervasive sitcom feeling about it — the comedy of embarrassment, the comedy of misunderstanding, mistiming and circumstance. That is, not much real comedy at all.

The really funny characters here are Stifler, whose madly irresponsible and anarchic behaviour is much as it was in high school, and Jim’s dad (Eugene Levy), whose ponderous maturity is a masterpiece of solemn understatement. One could say that the truly funny stuff in American Pie: Reunion is not in fact related to the relatively banal problems of young adulthood but, in fact, happens at its margins — the persistent adolescence of Stifler and, at the other end, the ageing and decline of Jim’s dad.

Hence American Pie: Reunion is split between a commitment to family and romantic issues, which it has to endorse if it is to be a mainstream American comedy, and the Stifler-type comedy of utter derangement, which subverts any such commitment. That the Stifler antics are by far the funnier is doubtless of some great sociological significance; it is as least a sign of how such a movie wants both to have its pie, as it were, and eat it.