The crime which went away 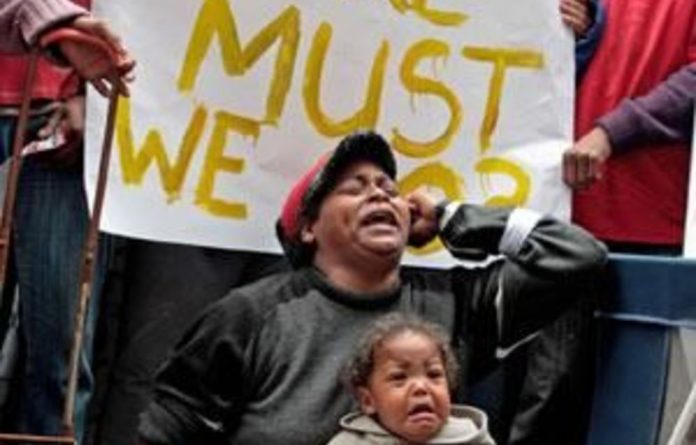 Early in 1968 the apartheid government decreed that African people in and around the community at Maria Ratschitz mission near Ladysmith were to be forcibly removed and dumped on barren exposed land called at Limehill. This was not the first or the last of the forced removals characteristic of the apartheid regime’s determination to deny towns and cities to the African people and instead to constitute black political entities, “homelands”, on the remaining land occupied by Africans.

The apartheid dream was of South African cities and farms emptied of black people and “homeland” black police states fighting semi-autonomously against the inevitable resistance. Africans would then be confirmed as citizenless foreigners in the land of their birth.

But the Limehill removal was the signal for a sustained campaign of opposition which pulled together the internal opposition, exposed the crimes of the Nationalist Party government, and spurred even dilatory Western powers into formal opposition. These horrors led to apartheid being declared a crime against humanity.

At the centre of this opposition was Cosmas Desmond, the priest located at Maria Ratschitz, who died on Saturday, March 31. He gave himself to the task of documenting and exposing these removals taking place throughout the country.

A veteran VW Beetle was bought and he disappeared down dirt roads and beyond into roadless rural areas bearing previously unrecognised names such as Mondlo, Mdantsane, Sada, Ilinge, Dimbaza, Zwelitsha, Botshabelo, Alcockspruit, Waschbank, KwaNgema and Driefontein. He would reappear in Johannesburg in 1969 with notes and manuscripts which eventually made up the book published by the Christian Institute as The Discarded People.

His book chronicled the dumping of people wrongly located in the plan of apartheid and “surplus” to the needs of capitalism in remote areas without houses, food and support.

‘Expendable’
Removals in isolated rural areas involved the humiliation of people reduced to quietly ascending the removal trucks under the gaze and guns of the police and left destitute on barren land. This institutionalised, administrative violence was designed to drive the “surplus” and “expendable” out of sight to live or die as they may in the police-state Bantustans. Death, disease and despair were the result.

But the campaign ensured they were located, brought back to mind and that the regime was subject to surveillance and sanctions. Desmond’s work triggered widespread publicity which was particularly effective in electronic media. The film Last Grave in Dimbaza which carried the graphic detail of degradation and death of sites around the country caused an international outcry and provided the evidence of such inhuman acts of systematic oppression.

This necessary documentation was critical to the United Nations presenting the International Convention on the Suppression and Punishment of the Crime of Apartheid for adoption in 1973. The crime of apartheid was defined as “inhuman acts committed for the purpose of establishing and maintaining domination by one racial group of persons over any other racial group of persons and systematically oppressing them”. Forced removals to compress people into racial categories was a unique feature of the system.

The timing of the declaration links closely to the exposure of forced removals.

Desmond’s work would later be taken up in a series of studies in the Report of the Surplus People’s Project which provided an extended review and fresh detail into the 1980s.

At his 70th birthday party I approached Cos Desmond and said he must record what he could about his life experience in writing the Discarded People.

He laughed wryly at the idea of an autobiography and gave me a maybe … he might just turn his mind to chronicling his work but he wasn’t so sure of its significance. Was his life and contribution really so important?

Rewards
Anti-apartheid combatants have been rewarded but also diminished by the ending of apartheid. The reward was the freeing of our people from the bondage of apartheid, but they have also been diminished by the trivialisation of great work of resistance in words and deeds and the careless dealing with crimes against humanity.

The concluding scene in Last Grave in Dimbaza is of row after row of the graves of children who died after this dumping. As one of a group of students in discussion after film audition of in 1973 which was inspired by Desmond’s work we resolved that a version of the Nuremburg Trial would have to be held in the post-apartheid era. That was not to be.

To my knowledge none of the bureaucrats of death were named and shamed. Now Dimbaza is a township on far-flung hills about 66km outside of East London. This name and even that of Limehill has lost its sting. South Africa has grown and these areas are now integrated into the road system and have their local municipalities. The memory fades.

What was all the fuss about?

This diminution of these historic crimes and the slow pace of genuine transformation had its effect on Cos Desmond, his work and his feeling of self-worth. He had often had to stand alone not only by the action of the regime but also by the priests in the Bantustans who found his research inconvenient and irritating and the shying away of the Catholic Church (with the notable exception of Archbishop Hurley).

His friendship with members of Black Consciousness (he enjoyed the ready open respect of Steve Biko and other BC leaders) did not serve favour with the Congress Movement and the ANC. In the new South Africa he was further diminished along with the lighter weighting of the crimes he chronicled.

Cosmas never stood on his dignity or pronounced on his worth. His references to himself were often diffident, self deprecatory and ironic. Recently I was intrigued to hear that Van Gogh wrote that he knew he was regarded by society as a non-entity, an eccentric and a curiosity. He responded, “All right, then … I should one day like to show by my work what such an eccentric, such a nobody, has in his heart.” This was not quite Cos who was loved and held in high regard by the circle he cared for but there is a certain line in parallel.

He criticised the compromises and social degradation in the country of his adoption as only one who loved it so deeply would do.

Despite the black majority gaining electoral power, the long standing effects of forced removal policy remain and perpetuate the gaping and widening inequality in income, wealth and land characteristic of our society. What happened to the crime of inhumanity declared in response to these forced removals and the promise of redistribution? History will revise judgment of the life and worth of Cosmas Desmond.