Defiant Juju thumbs nose at ANC’s bid ‘to silence him’ 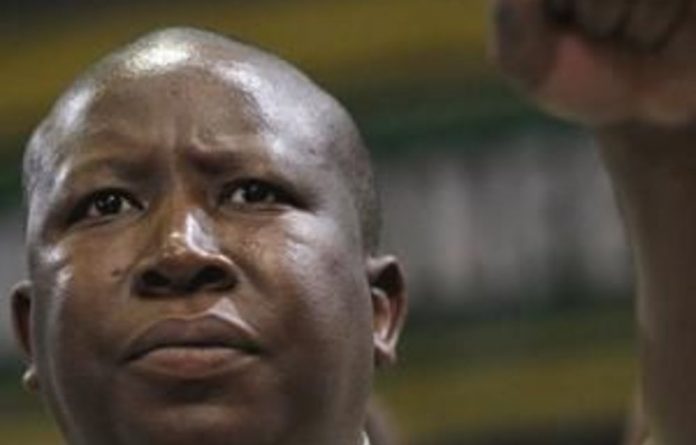 In open defiance of the conditions of his suspension from the ANC, youth league leader Julius Malema has addressed a church service in Butterworth in the Eastern Cape.

The SABC reported that Malema had spoken out against what he called “individuals trying to silence him” at a second church service which he had attended.

“I will never be silenced. There is nobody who has a right to silence me,” the Dispatch Online quoted Malema as saying on Friday.

“The right to speak was given to me from the day I was born.”

According to the Dispatch Online, Malema said he was not at the Last Move Ministries church to speak politics.

“When everything is difficult out there, the only safe place is church because in church you don’t discriminate. We are here to receive blessings.

In a statement on Thursday, ANC Youth League spokesperson Floyd Shivambu said: “In celebrating Easter Friday and commemorating the life of Solomon Mahlangu, president Julius Malema will visit the Twelve Apostles’ Church in Christ in Butterworth.”

Mahlangu was an Umkhonto we Sizwe soldier hanged by the apartheid government in 1979.

Malema was visiting the church in his capacity as the league’s president, Shivambu said.

He said Malema had not spoken at the Twelve Apostles’ Church in Christ, but the embattled youth league leader had reportedly attended a second church service at Last Move Ministries, where he did speak.

This was Malema’s first public appearance since the suspension.

According to the SABC he was accompanied by members of the league’s national executive committee, the provincial executive and National Youth Development Agency chair, Andile Lungisa.

On Wednesday, Malema was gagged and temporarily suspended by the ANC’s national disciplinary committee (NDC), a move which forbids him exercising any duty as an ANC member, president of the ANCYL or member of the Limpopo provincial executive committee.

Malema’s temporary suspension from the party followed comments he made at a centenary lecture at the University of the Witwatersrand last Friday. Malema called ANC President Jacob Zuma a dictator and said he was suppressing the youth league.

The ANCYL leader was informed on Wednesday morning of his immediate temporary suspension, and that the NDC would bring disciplinary proceedings against him.

The NDC had instituted special measures because of Malema’s repeated behaviour. Malema is appealing his expulsion from the ANC for sowing division in the party and for bringing it into disrepute. The appeals hearing was expected to take place on April 12.

With people queuing for services, no water, lax enforcement of mask rules and plenty of partying, the virus is flourishing once again, and a quarter of the growth is in the Eastern Cape
Read more
Sport

The president was answering questions before parliament, where he also told the EFF to allow the courts to decide on the matter of the CR17 bank statements
Read more
Coronavirus

As the president extends the state of disaster for another month, other restrictions will be eased, including those on alcohol sales and international travel
Read more
Politics

MPs can’t seem to stop the house from degenerating into screaming matches, even during virtual sittings, as exhibited when the deputy president answered questions in the NCOP on Wednesday.
Read more
Politics

EFF leader Julius Malema says the party is preparing to govern in many municipalities from next year. It is also launching a programme to defend the rights of farm workers
Read more
Advertising