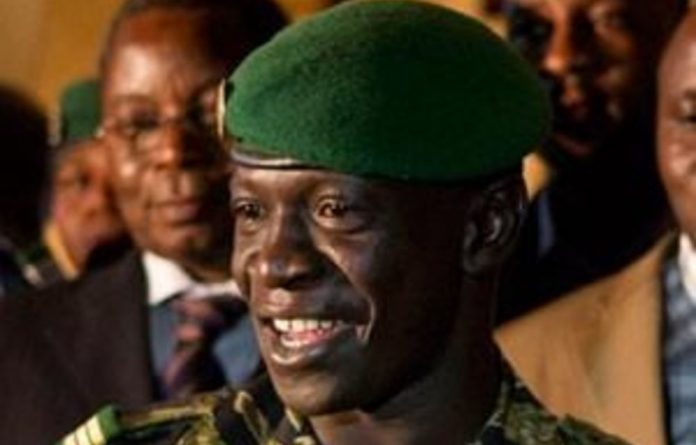 Armed Islamists stormed the Algerian consulate in north eastern Mali and abducted seven diplomats on Thursday amid fears that al-Qaeda-linked fighters are turning the country into a rogue state and fuelling a humanitarian crisis.

Alarmed by the sudden collapse of the West African nation, which has split into a rebel-controlled north and junta-controlled south in two weeks since a coup, the international community grappled for a response.

Algeria’s foreign ministry said an unidentified group had attacked its consulate in the town of Gao and kidnapped the consul and six staff members.

Witnesses said the raiders hoisted the black Salafist flag that has been the emblem of Islamist rebels who have overrun Timbuktu and other northern cities.

Humanitarian groups Oxfam and World Vision also said they were worried about sanctions imposed on Mali after the coup by regional grouping Ecowas.

“If maintained as they are for more than even a few days, sanctions by Ecowas could further undermine the efforts to help the 3.5-million Malians already affected by a serious food crisis,” said Oxfam country director Eric Mamboue.

While welcoming the Economic Community of West African States’ concern to swiftly settle the political crisis, Oxfam is particularly concerned by sanctions to close Mali’s borders, the denial of access to sea ports and the closure of some central banking functions.

Failing to tackle uprising
The dire situation in Mali stems from a March 22 coup led by Captain Amadou Sanogo and a small group of low-ranking soldiers who ousted President Amadou Toumani Toure just weeks before he was due to step down.

The troops justified their takeover by arguing Toure’s regime had failed to tackle the Tuareg uprising but rebels exploited the power vacuum and swept Mali’s north.

The junta, which at times told the Malian army not to resist the offensive, on Thursday called on northern Mali residents to resist the “invaders” themselves.

Ecowas army chiefs on Thursday drew up a “mandate” for a 2 000-strong force that could be sent into a section of Mali the size of France that is now in Tuareg separatist and Islamist hands.

However an Ecowas official said after a 12-hour meeting in the Côte d’Ivoire city of Abidjan that the military plan still needed approval from regional heads of state.

In the Mali capital Bamako on Thursday, regional mediator Burkina Faso Foreign Minister Djibrill Bassole said an announcement in “the right direction” was expected from coup leader Sanogo and that sanctions could be lifted soon.

Observers say the West has an obligation to intervene after its role in ousting Libyan dictator Muammar Gaddafi forced hundreds of well-armed Tuareg fighters to flee home to Mali, overwhelming its army and giving other outlaws a means to serve their own interests.

“The factor that unleashed all of this is the Western intervention in Libya,” said Eric Denece, director of the French think-tank CF2R.

“There won’t be a military solution for the Tuaregs. It’s a political solution that we need,” Foreign Minister Alain Juppe said.

As the Tuareg trumpeted the success of a decades-old struggle to “liberate” their homeland, their fundamentalist comrades-turned-rivals began imposing sharia law in parts of northern Mali.

The National Movement for the Liberation of Azawad (MNLA) said as a result of their successful conquest of an area they call the Azawad, they are halting all military operations from midnight Thursday.

But the desert nomads are not alone in the north and many say it is the Ansar Dine led by Iyad Ag Ghaly — which has begun imposing Sharia law — who are the new masters of the desert.

“From what we know, the MNLA is in charge of nothing at the moment … it is Iyad who is the strongest and he is with AQIM,” a Malian military source said, referring to al-Qaeda in the Islamic Maghreb (AQIM).

Ansar Dine, “Defenders of Faith” in Arabic, has ordered women to wear headscarves and threatened to cut off the hands of thieves in the ancient city of Timbuktu, once the jewel in Mali’s tourism industry.

The UN Security Council has called for an immediate ceasefire but proposed no firm action as the junta floundered. — Sapa-AFP

Serge Daniel
Serge Daniel is a journalist and writer Franco-Beninese. He is the author of the best-selling book Les Routes clandestines (Hachette publishing house). He is correspondent for Radio France International and Agence France-Presse in Mali . He is the oldest post of all RFI correspondents on the African continent.
Facebook
Twitter
WhatsApp
Linkedin
ReddIt
Email
Print