Hurricanes deal a blow to Sharks in Super Rugby 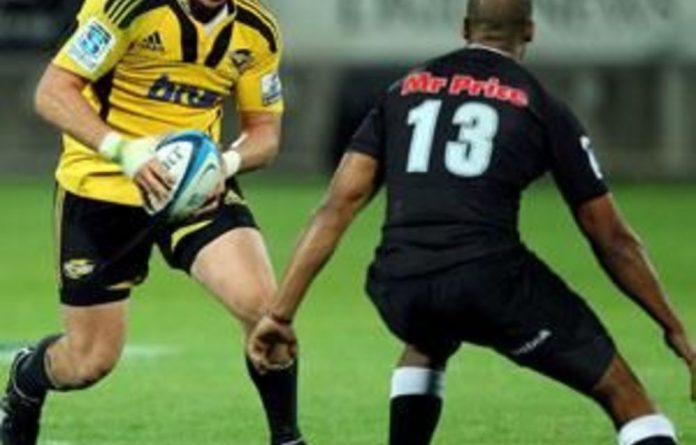 The Wellington Hurricanes put last week’s extraordinary defeat behind them with a six-try, 42-18 victory over the Sharks in a sometimes fractious Super Rugby encounter in New Plymouth on Friday.

The Hurricanes blew a 32-11 lead to lose to the Cheetahs last week but there was to be no repeat at Yarrow Stadium as Andre Taylor, Jack Lam, Julian Savea, Conrad Smith, Tim Bateman and Jeremy Thrush crossed to give the home side a bonus point and a fourth win in seven matches this season.

The Sharks, who scored second half tries through centre JP Pietersen and fleet-footed hooker Craig Burden, will count themselves unlucky to fall to such a heavy defeat despite dominating possession and territory for large parts of the game.

“I was stoked the way the boys stood up,” Hurricanes skipper Smith said in a pitch side interview.

“We had a setback last week and were pretty disappointed but we’ve worked hard [and] it showed some character to keep knocking them over, they have some big boys.”

It was powerful running that won the Hurricanes their first try after 13 minutes when fullback Taylor tore through the Sharks’ defence with an impressive burst of pace to score his fifth try of the season.

Flanker Lam added the second seven minutes later and the third, the pick of the scores, came on the stroke of halftime after another searing Taylor break resulted in winger Savea touching down in the corner.

Hurricanes fly half Beauden Barrett kicked one of his two penalties after a mass brawl on the half hour mark which also resulted in Sharks’ prop Jannie du Plessis and home flanker Karl Lowe being shown a white card and facing possible further disciplinary action.

Even with a 25-3 halftime lead, memories of last week’s 47-38 defeat meant a Frederic Michalak penalty and Pietersen early try in the second half would have left more than a few Hurricanes fans nervous.

Smith snared scrumhalf TJ Perenara’s grubber kick to score in the corner, his fellow centre Bateman caught his own up and under to secure a fifth try and when replacement Thrush crashed over the line with seconds remaining, the match was already well won. — Reuters