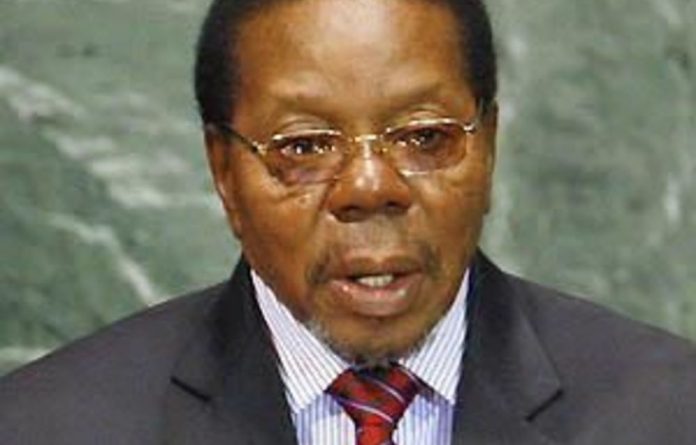 Malawi’s President Bingu wa Mutharika has died after a heart attack, a hospital source said on Friday, but the government’s official silence has created political suspense over his succession.

The impoverished nation was plunged into a long night of intrigue after Mutharika’s heart attack in the capital Lilongwe. He was rushed to hospital but doctors were unable to save him, a source at the hospital said.

“He died … after two hours of resuscitation”, shortly after midnight, the hospital source said, speaking on condition of anonymity because the government has not yet made a formal announcement.

Mutharika was reported by state radio to have been airlifted to South Africa in the early morning hours.

Reporters at the airport in Lilongwe said they were chased from the terminal during the night departure.

Neither the South African government nor hospital officials in Johannesburg could comment on Mutharika, saying only Malawi’s government was authorised to speak about the president.

The hospital source in Lilongwe said he was taken to South Africa to be embalmed, in a move widely seen as an attempt by the ruling Democratic Progressive Party to get its house in order over the succession issue.

Succession battle
Under the Constitution, Vice-President Joyce Banda is next in line. But that succession is politically fraught because Mutharika kicked her out of the ruling party in 2010 as he chose to groom his brother as heir apparent instead of her.

Her ouster angered many urban voters who saw the move as an attempt by Mutharika to concentrate his power.

Mutharika, a former World Bank economist who first came to power in 2004, was re-elected with a sweeping majority in 2009 as president of the poor Southern African country.

But he has increasingly come under fire for attempts to rein in the media and to shield the government from public criticism.

His feuds with donors and lenders like the International Monetary Fund have hamstrung the economy in an aid-dependent nation, which is suffering from shortages of foreign currency that have left Malawi unable to import enough fuel to meet its needs.

Malawi suffered for decades under the brutal dictatorship of Kamuzu Banda, and is proud of its hard-fought democratic freedoms ushered in with multi-party elections in 1994.

‘Huge suspense’
Any attempt to circumvent the Constitution would certainly meet with resistance, analysts said.

“It’s automatic that she takes over the presidency. The reality on the ground is that Banda takes over until the remainder of the term in 2014, unless someone wants to change the rules,” lawyer Wapona Kita said.

Kita said the Constitution “clearly states that in the event of incapacitation or death of the president, the vice president takes over.”

Banda formed her own People’s Party after being sacked from the ruling party. Mutharika then filed a case at the high court seeking to force her from office, arguing that his running mate had become an opposition figure.

The official silence has heightened anxieties in Malawi, with the Daily Times writing that Malawians are in “huge suspense” over the president.

“The nation’s suspense has been intensified after high-profile officials who included several cabinet ministers arrived at the hospital and went straight to the intensive care unit,” it said. “After some time, they trooped out with sad faces and without a word.”

The Nation, another independent newspaper, criticised the government’s handling of Mutharika’s hospitalisation.

“It is time to do things well through provision of timely information,” the paper said, adding that the government “could have done better than the sketchy statements broadcast on state radio — as almost everyone was left guessing.” — AFP