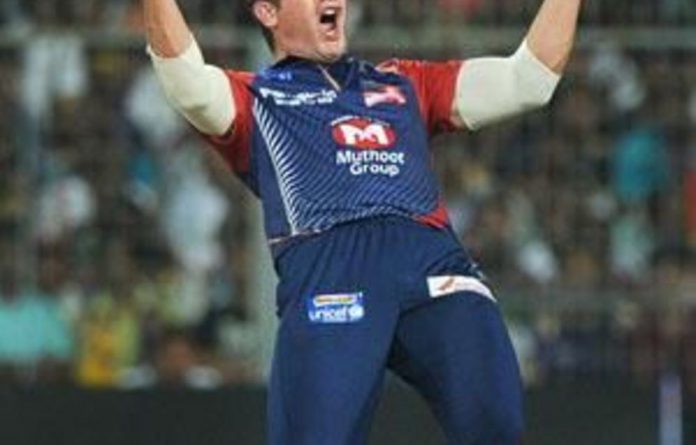 Left-hander Pathan clobbered an unbeaten 42 off 20 deliveries to help Delhi score 100-2 off 11.1 overs after Morkel grabbed 3-18 to restrict Kolkata to 97-9 in a game reduced to 12 overs per side because of rain at Eden Gardens.

Delhi openers Aaron Finch (30) and captain Virender Sehwag (20) set up the chase with a 49-run opening stand before both fell in quick succession. Pathan then quelled an increasing asking rate with the help of three well-timed sixes to the leg side.

Kolkata captain Gautam Gambhir conceded Pathan and Morkel snatched the game away from the home side.

“Morne bowled some real quality stuff but in the end we had a good total,” Gambhir said. “But then they batted really well, especially Pathan.”

Earlier, the Delhi pace bowlers did not disappoint Sehwag, who decided to bowl first after winning the toss.

Kallis tried to work the ball down the leg side and was bowled, while Tiwary suffered a first-ball dismissal as he failed to bring down his bat in time and saw his stumps shattered.

Morkel also grabbed the important wicket of Gambhir (16) just when the left-hander seemed to be leading a recovery. Gambhir tried to run the ball down to third man but managed to deviate it only on to the stumps.

Kolkata was 55-6 at one stage but allrounder Laxmi Ratan Shukla ensured a fighting total as he smashed 26 off 17 balls with two sixes and a four before being dismissed in the penultimate over.

On Friday, the Harbhajan Singh-led Mumbai Indians hosts Pune Warriors after winning the tournament’s opening fixture in an away game against defending champion Chennai Super Kings on Wednesday.