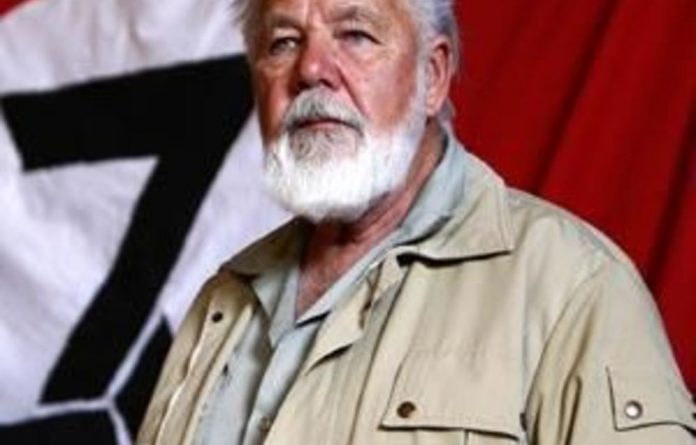 A sodomy claim by a farm worker accused of killing right wing leader Eugene Terre’Blanche was questioned in the high court sitting in Ventersdorp on Tuesday.

“No my lord, from myself and my investigation it never surfaced, even during my interview with [accused Chris Mahlangu],” investigating officer Lieutenant Colonel Tsietsi Mano testified.

Mahlangu’s lawyer Kgomotso Tlouane put it to Mano that his client alleged Terre’Blanche had sodomised him.

Mahlangu and a teenager are charged with beating Terre’Blanche to death in his farmhouse outside Ventersdorp in the North West on April 3 2010.

Both have pleaded not guilty to murder, housebreaking, and robbery with aggravating circumstances. Mahlangu claims he acted in self-defence. The teenager has denied involvement in the crime.

No semen
Mano was questioned about fluid allegedly seen on Terre’Blanche’s genitals.

The body was removed before Mano arrived at the house on the night of the murder. He said he only saw it during the post mortem.

“I asked the pathologist [if she found semen] and she said no. I know for a fact I asked,” Mano said.

In October, pathologist Ruweida Moorad testified that Terre’Blanche’s body may have been wiped before an autopsy was done.

“Perhaps when it [the body] was transported in a body bag it [the semen] was wiped off. I honestly don’t know,” she said at the time.

The state was questioning her medical examination of Terre’Blanche. A substance believed to be semen was seen in photographs of his body taken at the crime scene. The substance was not visible when Moorad carried out her examination, but it was visible in the photos.

She said the body was refrigerated. Her autopsy was done on April 6, three days after the murder.

Self-defence
Later on Tuesday it was revealed that Mahlangu maintained the murder was self-defence.

Tlouane said his client tried to retrieve his suitcase from Terre’Blanche’s house when he was confronted. Mahlangu claimed he was then sodomised and assaulted and could not escape. In self-defence he picked up an iron rod in the bedroom and hit Terre’Blanche.

He also claimed Terre’Blanche was standing up when he hit him. He then fell onto the bed, where his body was found.

“[Mahlangu’s] instructions were that he regretted that he went to look for the suitcase … if he hadn’t gone there, one the sodomy, two the fight [would not have happened],” Tlouane said.

Mano denied Mahlangu’s version of events. He maintained his sworn statement was based on the information Mahlangu gave him after the murder.

“[Mahlangu told me] that he could see Terre’Blanche lying on the bed. The deceased never saw or heard them as he was asleep,” Mano said.

Mano testified Mahlangu planned to castrate Terre’Blanche after the murder.

“[Chris] Mahlangu said he pulled Terre’Blanche’s pants down and exposed his genitals. His intention was to dismember Terre’Blanche. But he decided against it.”

Murder
Mano told the court Mahlangu said he and his co-accused, a minor who may not be named, decided to kill Terre’Blanche in April 2010.

Mano was testifying about a statement given by Mahlangu on the night of the murder. He said Mahlangu stated he went into a storeroom at the farm, where he found an iron rod. He and the teenager entered Terre’Blanche’s house through a window. They apparently found Terre’Blanche lying on his back on the bed.

“His colleague took the rod from him. He hit Terre’Blanche in the face… some few blows on the chest as well,” Mano said.

Norman Arendse, for the minor, also cross-examined Mano. He said if the semen on Terre’Blanche was wiped off before the body was removed, it would mean someone had tampered with the evidence.

“If it was deliberately removed then it was a serious offence, because that part of the evidence would be crucial,” Arendse said.