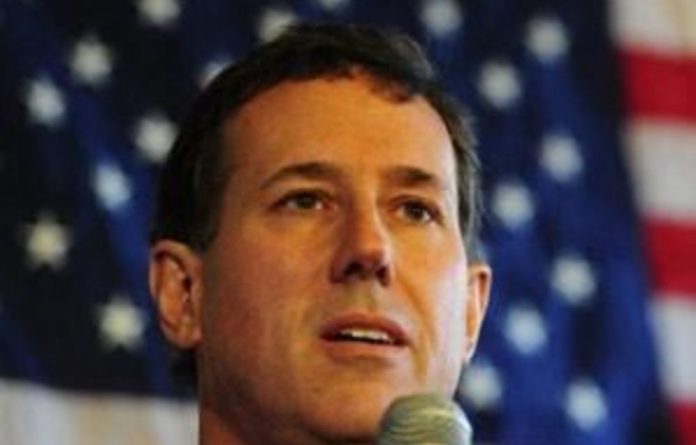 Rick Santorum suspended his campaign for the Republican presidential nomination Tuesday, leaving the field clear for Mitt Romney as the party’s likely choice to challenge President Barack Obama in November.

The former Pennsylvania senator made the announcement in his home state, two weeks before the Republican primary vote there. Santorum was trailing Romney in polls in Pennsylvania and had said the state was a must-win to keep his candidacy alive.

“This race is over for me,” Santorum told supporters of his improbable campaign, saying he and his family had made the decision over the weekend after his 3-year-old daughter’s latest hospitalisation.

Santorum was a favourite of the most conservative Republican voters, but Romney, the former Massachusetts governor, had accumulated a huge lead in delegates to the party’s national convention in August.

Santorum pointedly made no mention or endorsement of Romney, whom he had derided as an unworthy standard-bearer for the Republicans.

‘Able and worthy’
Romney congratulated Santorum on his campaign, calling him an “able and worthy competitor”.

Romney’s credentials are suspect among the conservative Republican base, but Santorum’s inability to put together primary election victories in key states — especially in the industrial Midwest — appeared to have convinced most voters that Romney’s nomination was inevitable.

Santorum was the only Republican in what started out as a crowded field who was able to create a sustained challenge to Romney, who is making his second run for the nomination.

The distaste that conservatives felt for Romney showed itself in a series of runs at his front-runner status by Representative Michelle Bachmann, Texas Governor Rick Perry, businessman Herman Cain and former speaker of the House of Representatives Newt Gingrich.

Gingrich on Tuesday said he would stay in the race until the party’s convention.

Family decision
Santorum was to have returned to the campaign trail on Tuesday after his three-year-old daughter Bella was released from the hospital. She suffers from a rare genetic condition and was hospitalised Friday as her father began a brief holiday break from campaigning. She was discharged from the hospital Monday night.

Romney said her latest hospitalisation led him and his family to decide against continuing in the race.

President Barack Obama, meanwhile, stepped up his election-year insistence that the wealthy pay a greater share of taxes, renewing his call on Tuesday for Congress to raise taxes on millionaires.

Hoping to draw a sharp contrast with Romney, Obama outlined his support for the so-called “Buffett rule” in Florida. Obama says he wants to revamp the US tax law under which wealthy investors often pay taxes at a lower rate than middle-class wage-earners.

The push for the Buffett rule is named after billionaire investor Warren Buffett, who famously said it was wrong for him to be paying a lower tax rate than that levied on his secretary.

Tax the rich
Obama has proposed that people earning at least $1-million annually, whether in salary or investments, should pay at least 30 percent of their income in taxes. Many wealthy taxpayers earn investment income, which is taxed at 15%, allowing them to pay a smaller percentage of their income in taxes. The top rate for taxpayers with high incomes derived from wages is 35%.

The White House said in a report released ahead of Obama’s speech that the tax proposal would restore fairness to the system, pointing to 22 000 households earning more than $1-million annually that paid less than 15% of their income in income taxes in 2009. Nearly 1 500 of those households paid no federal income taxes, the report said.

Obama also was holding three fundraisers in Florida that were expected to raise at least $1.7-million.

Romney campaign spokesperson Gail Gitcho said Obama was the “first president in history to openly campaign for re-election on a platform of higher taxes”. — Sapa-AP