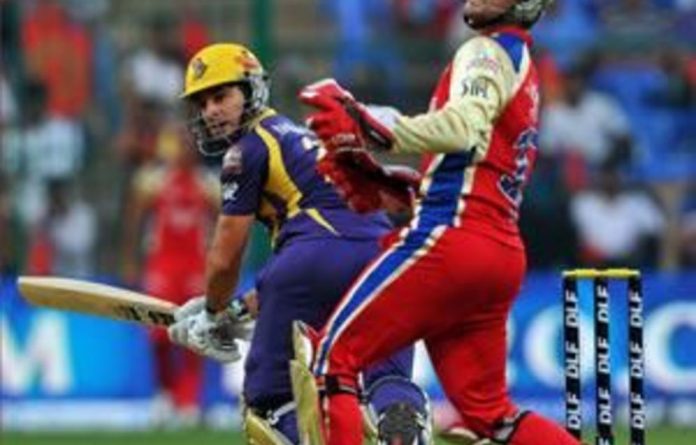 Kolkata Knight Riders and Delhi Daredevils were the winners of one-sided games of the Indian Premier League on Tuesday.

Pace bowler Lakshimpathy Balaji’s haul of 4-18 helped Kolkata score a 42-run victory over Bangalore at the Chinnaswamy Stadium, while England batsman Kevin Pietersen smashed a quick 43 not out to guide Delhi to an eight-wicket win over Chennai Super Kings at the Ferozeshah Kotla in New Delhi.

Kolkata scored 165-8 and restricted Bangalore to 123-9. South Africa all-rounder Jacques Kallis (22 and 2-7), captain Gautam Gambhir (64) and Manvinder Bisla (46) were the other main performers apart from Balaji.

Kolkata made a superb start after being put in to bat but faltered in the latter half of its innings when a total of close to 200 looked likely.

Steady innings
After Kallis’s steady innings was brought to an end by Bangalore captain Daniel Vettori, Gambhir and Bisla added 64 in less than eight overs.

Gambhir struck nine fours in 39 balls, the captain hitting pace bowler Harshal Patel for 15 in an over, including the lone six of his innings.

Sri Lankan spinner Muttiah Muralitharan, Zaheer Khan and Vinay Kumar took two wickets each as Kolkata slipped from 125-1 in the 14th over. Manoj Tiwary, Yusuf Pathan, Ryan ten Doeschate and Shakib al-Hassan all failed to get into double-figures.

In reply, Bangalore failed to recover from the early wickets by Kallis and Balaji was later well supported by all-rounder Rajat Bhatia in the middle of the innings to mount pressure on the batsmen.

Brief resistance
Bangalore was 33-5 in the 10th over. A brief resistance by Vettori (20) was brought to an end by Balaji in his final over. Vinay Kumar threw his bat around for 25 off 26 balls but the contribution was too little too late.

Kolkata won its first game after two losses. Bangalore has one win and one loss so far.

At New Delhi, two-time defending champion Chennai suffered four run outs including that of opener Murali Vijay off the very first ball and was never really in the game.

Delhi captain Virender Sehwag’s quick 33 off 21 balls set the tone and then Pietersen and Mahela Jayawardene (20 not out), both of whom joined Delhi after figuring in a test series in Sri Lanka, saw the team through with a 61-run unbroken stand.

Delhi has two wins and a loss after this result, while Chennai has one win and two losses. — Sapa-AP