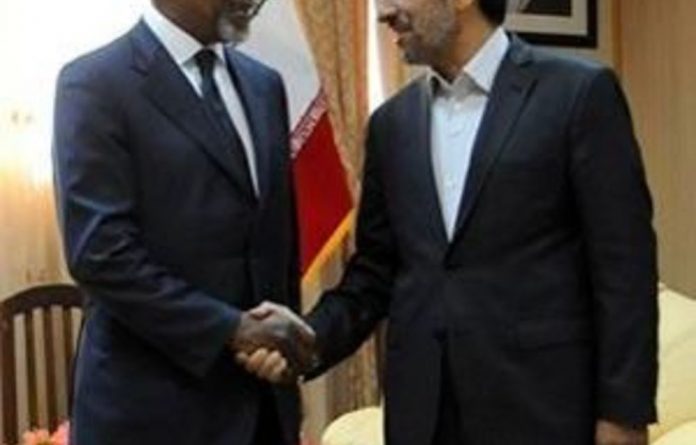 Syria has told international mediator Kofi Annan that it will halt all fighting by a dawn deadline on Thursday but reserves the right to respond to any attack by “armed terrorist groups”, the peace envoy’s spokesperson said on Wednesday.

He also stressed that Annan’s peace plan required Syrian armed forces to withdraw from urban areas — something a televised government statement did not mention.

Spokesperson Ahmad Fawzi, in a statement, quoted a letter from the Syrian foreign ministry which gave an undertaking “‘to cease all military fighting throughout Syrian territory as of 6am [3am GMT] tomorrow, Thursday, April 12 2012, while reserving the right to respond proportionately to any attacks carried out by armed terrorist groups against civilians, government forces or public and private property’.”

Annan, special envoy of the United Nations and Arab League, said he would continue to work with the Syrian government and opposition to ensure complete implementation of his six-point peace plan, including “item 2”, the statement said.

“Item 2” commits the Syrian government to withdrawing military forces from population centres, not just stopping the fighting. State TV, reporting a government pledge to cease fire, made no mention of it pulling back troops.

Fawzi said Annan, the envoy of the United Nations and the Arab League, would seek international backing to ensure compliance: “The joint special envoy looks forward to the continued support of relevant countries in this regard,” he said in the statement.

Annan had expected Syria to begin the withdrawal on Tuesday, well ahead of the final ceasefire deadline, in a show of good faith by the stronger party time. But the violence has continued and government forces were still bombarding opposition neighbourhoods on Wednesday.

Annan was in Iran for talks on Wednesday but was expected to return to UN offices in Geneva in time to brief the security council in New York by video link on Thursday. — Reuters