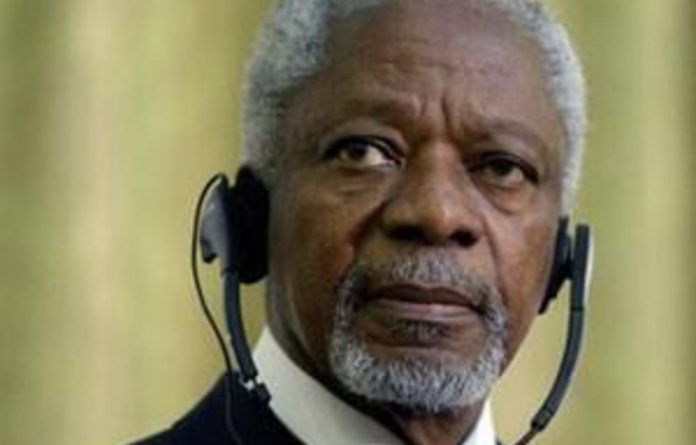 Kofi Annan has vowed to continue efforts to secure a ceasefire and launch political negotiations in Syria, despite continuing attacks on rebel-held areas and claims that government forces killed 1 000 people in the eight days before a truce was due to begin on Tuesday.

Speaking hours after the expiry of a deadline for the withdrawal of troops and heavy weapons from towns, the UN-Arab League envoy said his six-point plan was “very much alive”.

Frantic diplomacy in Moscow and at the UN in New York pointed to intensifying attempts to bring about a full ceasefire within 48 hours. Annan told the Security Council it was essential Syria’s government “seize the opportunity to make a fundamental change of course” and halt all violence by 6am local time on Thursday.

Efforts have been made all the more urgent after Human Rights Watch on Tuesday released a report detailing widespread executions across Syria.

Western governments signalled continuing support for his efforts but used harsh language to condemn Syria President Bashar al-Assad. France called it a “flagrant and unacceptable lie” for Syria to claim it had already withdrawn its forces from populated areas, as required.

William Hague, Britain’s foreign secretary, said: “There is no evidence so far that the Assad regime has any intention of adhering to any agreement it makes.” If efforts failed, Hague warned, Britain was ready to return to the UN Security Council to call again for a united international response “to this clear threat to international peace and security”.

Hague said Britain would seek Syria’s referral to the international criminal court, although Russian and Chinese support would be needed for war crimes prosecutions.

‘Moment of truth’
Susan Rice, the US ambassador to the UN, tweeted to her followers: “After all this time and bloodshed, after all the commitments made and promises broken, we are facing a moment of truth.”

The Local Coordination Committees, an activist network, reported 65 dead across Syria on Tuesday as helicopters and tanks were deployed in the Aleppo area. Basma Kodmani, a spokesperson for the opposition Syrian National Council (SNC), told reporters in Geneva that 1 000 people had died in the last eight days.

But Annan made clear he was not giving up. “We still have time between now and April 12 to stop the violence,” he said after visiting a refugee camp on the Turkish border.

“It’s a plan we’re all fighting to implement … it’s a plan the Syrians have endorsed and from the comments made by the opposition, they’re also prepared to go along with it if the government meets its commitments to pull the troops out.” Rebuffing claims that his plan had already failed, he said: “If you want to take it off the table, what would you replace it with?”

In Moscow, Walid al-Muallim, Syria’s foreign minister, said his country was committed to the plan and for the first time appeared to imply that Damascus would accept UN monitors, as it accepted Arab League monitors for an ultimately abortive mission last December. Under current plans, an advance UN party is due to deploy by April 18.

Sergei Lavrov, the Russian foreign minister, appeared to administer a rebuke to Muallim, saying the Syrian government “could have been more decisive” in implementing the plan, but he also called on opposition forces to halt violence.

Viability
Annan, described by diplomats as “assessing the viability” of his initiative, was said to be hoping to persuade Iran, another close Syrian ally, to pressure Assad in talks in Tehran.

Syrian opposition activists have scorned Annan as naïve for appearing to believe that Assad would act in good faith. But independent commentators insisted he was being realistic. “The object of the exercise is to manoeuvre the Russians into a position where they have to go along with the international consensus,” a former UN aide said.

In the absence of international readiness to intervene in Syria along the lines of Nato’s controversial role in Libya last year, no government is prepared to admit that diplomatic efforts have been exhausted, even if the prospects for success are privately rated slender to non-existent.

Turkish Prime Minister Recep Tayyip Erdogan accused Syrian forces of violating the border in an incident on Monday and said his government was considering its response, including measures “we do not want to think about”. Ahmet Davutoglu, his foreign minister, spent the day consulting Security Council colleagues but diplomats made clear that Ankara would not act unilaterally.

The SNC and the Free Syrian Army, the opposition’s principal armed wing, accepted Annan’s plan but rejected a last-minute demand by Assad to provide written guarantees that they would lay down their arms.

Annan told the UN he had been advised by Lavrov following his Moscow meeting with Muallim “that the Syrian government is no longer insisting on written guarantees, but would need me to assure that the other parties and governments also accept the plan”. —