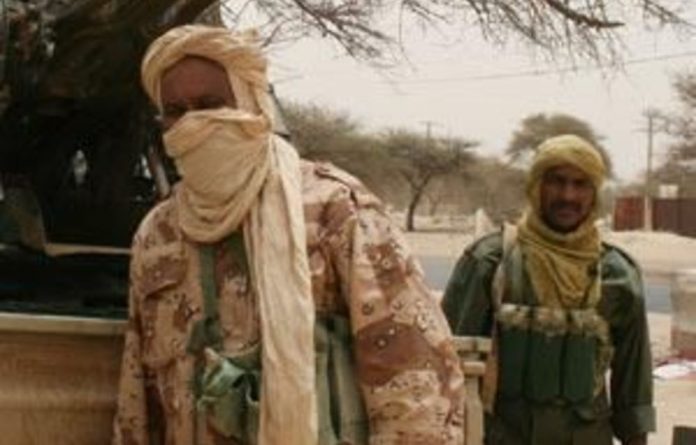 Mali’s new interim leader threatened to wage total war on Tuareg rebels and groups linked to al-Qaeda controlling the north of the country as he was sworn in Thursday, ending a junta’s brief stab at military rule.

Dioncounda Traore, the former parliamentary speaker, took the oath of office in the capital of the West African nation at a ceremony attended by, among others, junta leader Captain Amadou Sanogo who grabbed power in a March 22 coup.

Traore (70) took charge of a nation facing its worst crisis yet, threatening to unleash “total war” on the Tuareg rebels, extremist groups and outlaws who overran Mali’s vast desert north during the power vacuum created by the coup.

“I am aware of being the president of a country at war,” said the mathematician turned politician, who is expected to name a prime minister and organise elections within 40 days.

The rebels must “stop the … pillaging, the rapes, they must leave the cities that they have occupied,” he said.

If they do not, he added, “We will not hesitate to wage a total and relentless war.”

The junta had launched the coup that toppled president Amadou Toumani Toure on the grounds that the government was not effective in resisting a Tuareg rebellion which was rekindled in January.

Taking advantage of disarray
But the rebels took advantage of the disarray in Bamako by capturing an area roughly the size of France, including the ancient town of Timbuktu, sparking warnings of humanitarian disaster in an area already gripped by acute food shortages and drought.

The West Africa regional bloc Ecowas immediately condemned the coup, hit the junta with heavy sanctions and demanded it quit power, paving the way for Thursday’s restoration of civilian rule.

But the junta is expected to retain some influence, with observers saying coup loyalists could be named to key ministerial posts, notably those linked to security as the army tries to reverse the massive rebel gains.

The African Union applauded the handover of power to Traore, with Ramtane Lamamra, the commissioner for the AU’s peace and Security Council, praising Ecowas for its efforts.

A meeting on Mali will take place among AU Security Council members next week to “take appropriate measures on the evolving situation”, he said.

The coup leaders, Malian politicians and Ecowas mediators are scheduled to meet in Burkina Faso this weekend to clarify the still murky management of the transitional period.

Regional foreign and defence ministers met in Côte d’Ivoire on Thursday to mull the prospects of a military intervention in northern Mali, as fears rose that the rebel-held region could become a haven for radical Muslim extremists.

Reclaiming the region
The 15-nation Ecowas has raised the prospect of sending a force of up to 3 000 men to try to reclaim the region.

“We prefer peace, but if war is the only solution, we will make it with our army,” said Traore, who speaks French, Russian, English and Spanish as well as the Malian dialects Bambara and Soninke.

The Tuareg — many of them heavily armed and battle-hardened from last year’s Libya war where they fought as mercenaries for fallen dictator Muammar Gaddafi — took advantage of Mali’s political chaos to step up their long-simmering separatist campaign.

Joined by extremists linked to al-Qaeda in the Islamic Maghreb (AQIM), they made unprecedented gains in the weeks since the coup.

The main Tuareg rebel group, Azawad National Liberation Movement (MNLA), has declared an independent state, but their call has been rejected by the international community and by the MNLA’s former extremist allies.

Ansar Dine, the extremist group that controls several key towns, has imposed sharia law in some areas under its influence and distanced itself from the Tuareg nationalist cause.

Traore, speaking after he was sworn in, categorically ruled out the prospect of a Tuareg state.

‘Terrorist threat’
The UN Security Council has warned of the growing “terrorist threat” in northern Mali, while the world body’s rights chief Navi Pillay said rights violations could be worsening in the rebel-held north.

Reports “suggest that civilians have been killed, robbed, raped and forced to flee”, she said.

Both Ansar Dine and AQIM militias are also recruiting children in a bid to boost their forces, a local elected official and a journalist in the region told AFP.

Aid groups have warned of a humanitarian crisis after more than 200 000 people have been displaced by the fighting this year.

“They came with weapons and entered the offices,” a Timbuktu official told AFP by telephone from the northern city, but would not give his name.