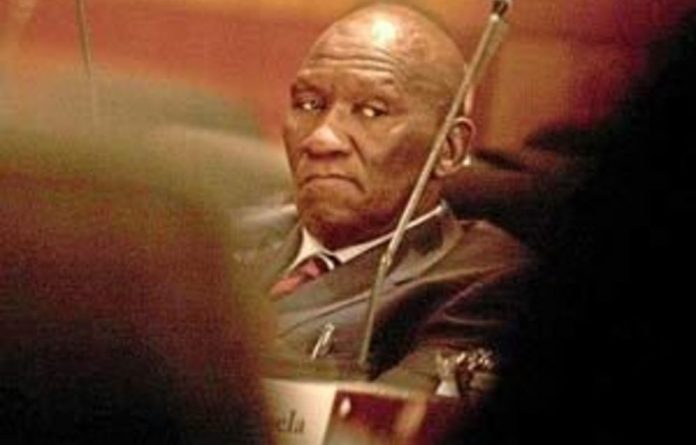 Suspended national police commissioner Bheki Cele was bugged by his own intelligence division and the interceptions, which began in late 2010, took place under the watch of crime intelligence boss Richard Mdluli, although the extent of Mdluli’s knowledge of or involvement in it is not clear.

A criminal case relating to the bugging of Cele’s phone calls has been registered and is being investigated.

Hawks spokesperson McIntosh Polela said: “Yes, we can confirm that there is an investigation — It’s at an advanced stage.”

Polela declined to provide any details but the Mail & Guardian understands that one of Cele’s phone ­numbers was allegedly put on an interception application filed under a false name.

The application is said to have been signed off by Mdluli in about November 2010, but it is not known whether there is any evidence that Mdluli was aware that one of the phone numbers listed in the application was Cele’s or whether he was personally supplied with information gathered by tapping it.

Mdluli could not be reached for comment, but messages were left for him with his secretary at crime intelligence.

The revelation is just the latest in a flurry of allegations that state security agencies are being abused to fight the ANC’s factional battles.

According to several sources in crime intelligence, Cele was bugged for about three months before it was picked up and reported to the deputy commissioner for crime detection, Lieutenant General Godfrey Lebeya, who launched an inquiry that ­culminated in the opening of a ­criminal case in Pretoria in December last year.

Ironically, the interception application was also aimed at Sunday Times journalists Mzilikazi wa Afrika and Stephan Hofstatter, who have been at the forefront of exposing Cele’s role in the police head office leasing scandal.

It has been suggested that the ­bugging of Cele’s media tormentors was a useful cover for the tapping of Cele himself.

According to evidence from two sources with an indirect knowledge of the events, the interception instruction came from the KwaZulu-Natal head of crime intelligence, Major General Deena Moodley.

Moodley received a notice of intention to suspend him in February.

The reason has never been made public but it is believed to relate to the bugging investigation.

Moodley is understood to have argued that he issued a lawful instruction and was not aware of any irregularities in how it was implemented.

As a result, his suspension was withdrawn, but on March 5 Moodley was transferred out of crime intelligence by the acting national commissioner of police Lieutenant General Nhlanhla Mkhwanazi.

Zulu has been named by one source as being part of the chain of command responsible for bugging Cele.

Carl van der Merwe, the lawyer acting for all three men, confirmed that the bugging of Cele was part of the background to the action taken against his clients, which are due to be challenged in court next week.

Asked who had issued the instructions for the interception, Van der Merwe said he did not want to make further comments because “there is still an ongoing criminal investigation”.

However, there is speculation in police circles that bugged conversations might have been used to drive a wedge between Cele and President Jacob Zuma.

Mdluli has been assiduous about sharing his claims with Zuma that there are conspiracies directed at both Zuma and himself.

In the same month that the bugging of Cele is believed to have been initiated, Mdluli sent a report addressed to Zuma in which he alleged the murder investigation against him was part of a politically inspired campaign by “senior officers”.

He noted: “The question arises — how do they want to use the intelligence environment to affect the 2012 build-up to the ANC conference.”

The M&G has obtained a copy of another, more recent, letter from Mdluli to Zuma in which he alleges that four top policemen, including Hawks commander Anwa Dramat, were part of a conspiracy acting against him.

In the letter, dated November 3 2011, Mdluli says he has received information that his arrest on murder and fraud charges was part of a conspiracy to get him removed from his position.

“It is alleged that I support the minister of police and the president of the country. In the event that I come back to work, I will assist the president to succeed next year.”

Mdluli does not distance himself from this allegation and says: “It is said that the following senior officers had been working together against me and even overlooked the Secret Service Act — to implicate me.

Mdluli asks that the allegations, which he supports with three affidavits, be investigated and “all ­disciplinary actions against me” be suspended until his criminal cases are finalised.

The fraud charges against Mdluli were withdrawn by the National Prosecuting Authority in December and the murder charge in February, both in the face of opposition from prosecuting staff.

Presidential spokesperson Mac Maharaj previously declined to comment on alleged communications between Zuma and Mdluli but said this week: “The matter relating to General Mdluli is an internal police matter; it has nothing to do with the president or presidency.”

However, at about the time of Mdluli’s November letter, Mkhwa­nazi, who had just been appointed acting national commissioner by Zuma, removed the powers of the handful of top officers who had the authority to recommend the approval of interceptions.

They included Dramat, in effect leaving the Hawks hooded.

It is understood that only Mkhwa­nazi and the man he appointed as deputy commissioner for operations, Lieutenant General Fanie Masemola, can now exercise this authority.

Mdluli, since his return to work, has wasted no time in announcing a restructuring of crime intelligence, a move that many officers will fear is the prelude to a purge.

In a memorandum dated April 4 on the “reorganisation of crime ­intelligence”, Mdluli says that the “incorporation of protection and security services into the division” has “necessitated the division to reorganise itself”.

The M&G reported in March that there were plans to transfer the command of the police VIP division and presidential protection unit to crime intelligence.

The reorganisation will give crime intelligence direct access to the most intimate day-to-day details of the activities of Zuma’s political rivals.

It will also place senior members of the presidential protection unit, whose personal loyalty Zuma has publicly praised, in a position to assume command roles in a reorganised crime intelligence division.

Responding this week to the claims that his phone calls were bugged, Cele said: “I honestly dismissed the rumour of this as a bad joke when they reached my ears a year or so ago. I now have good reason to ask the inspector general of intelligence to investigate this matter — a brazen violation of my rights.”